Warren Buffett's 10 Most Profitable Investments of 2017

While 24/7 Wall St. has focused on the individual stocks, it turns out that Buffett’s portfolio managers broke ranks with the Buffett and Munger view that airlines are losers. Buffett hated airlines for years (except for the richy-rich NetJets service, of course), but Todd Combs and/or Ted Weschler decided that the airlines having fewer competitors (wider moats on routes) and the ability for airlines to add on whatever fees they can come up with is now a good investment. Buffett confirmed that each manager now independently manages more than $10 billion. Their bets on the airline sector did not include American Airlines in the top holdings because it was a smaller investment, and that may undercount this profitability on the major airlines bet. The top four airlines were shown as follows:

One more consideration here is that the actual Berkshire Hathaway ecosystem may own even more shares than have been counted here. The notes from the table shown below say that the number of total shares excludes shares held by the pension funds of Berkshire subsidiaries. And on the cost basis, this has been shown as the actual purchase price and also the tax basis, while the GAAP cost differs in a few cases because of write-downs that have been required under GAAP rules.

If you want to know why Buffett is not exactly a huge fan of selling some stakes that may seem stale or boring to investors today (e.g., Amex, Coca-Cola), Buffett outlined the simple corporate math. Every $1 of capital gains that a corporation realizes carries with it 35 cents of federal income tax, and often state income tax as well. The tax on dividends received from domestic corporations, however, is consistently lower, though rates vary depending on the status of the recipient. Buffett further outlined how dividend and capital gains taxes are treated for Berkshire Hathaway:

Berkshire’s insurance subsidiaries pay a tax rate on dividends that is somewhat higher than that applying to non-insurance companies, though the rate is still well below the 35% hitting capital gains. Property/casualty companies owe about 14% in taxes on most dividends they receive. Their tax rate falls, though, to about 11% if they own more than 20% of a U.S.-based investee. 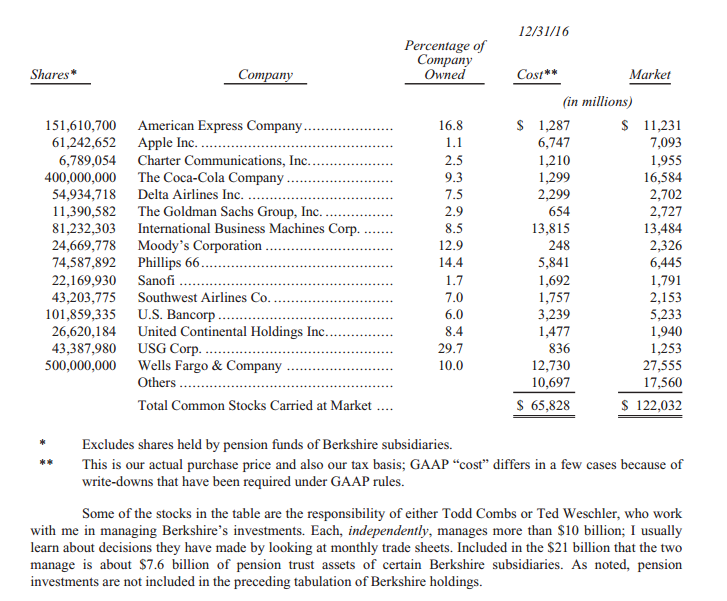