When Warren Buffett speaks, people listen. Being the richest man and being considered the greatest investor of modern times makes people care. Now that Berkshire Hathaway Inc. (NYSE: BRK-A) is out with its annual report and annual letter for 2016, 24/7 Wall St. has broken out many of the top gems from the report.

Of course, the full report if far more in-depth, and this is just a look at some of the most important parts.

Buffett is sticking with the ever-present notion that America’s best days are ahead. His report said: “American business – and consequently a basket of stocks – is virtually certain to be worth far more in the years ahead. Innovation, productivity gains, entrepreneurial spirit and an abundance of capital will see to that.”

Buffett included a full table in this annual report showing what percentage of each company that Berkshire Hathaway owned. It also has the total cost basis as $65.828 billion, versus a market value of $122.03 billion (see below). Two equity notes in newer large-scale positions are as follows.

How profitable Apple Inc. (NASDAQ: AAPL) has been: Buffett’s annual report showed that Berkshire Hathaway owned 61.24 million Apple shares of Apple at the end of 2016 with a cost basis of more than $7.74 billion, or about $110 per share — and a $26 profit as of Friday would be a gain of more than $1.6 billion so far.

Excluded from the table is the $5 billion of preferred stock issued by Bank of America Corp. (NYSE: BAC) to Berkshire Hathaway. This stock, which pays $300 million per year in income, has a warrant allowing Berkshire to purchase 700 million common shares of Bank of America for $5 billion at any time before September 2, 2021. At the end of 2016, that would have delivered a profit of $10.5 billion. If it wishes, Berkshire can use its preferred shares to satisfy the $5 billion cost of exercising the warrant.

Buffett increased his insurance float with $91.577 billion in 2016, but the report said: “We recently wrote a huge policy that increased float to more than $100 billion.”

Buffett is still full of praise for Ajit Jain, making him seem like the heir successor one day. Buffett’s report said:

Ajit insures risks that no one else has the desire or the capital to take on. His operation combines capacity, speed, decisiveness and, most important, brains in a manner unique in the insurance business. Yet he never exposes Berkshire to risks that are inappropriate in relation to our resources. If there were ever to be another Ajit and you could swap me for him, don’t hesitate. Make the trade!

Berkshire Hathaway’s Manufacturing, Service and Retailing operations saw revenue rise to $120.06 billion in 2016 (from $107.8 billion) and net earnings rose to $5.63 billion (from $4.68 billion). Included in this financial summary are 44 businesses that report directly to headquarters. 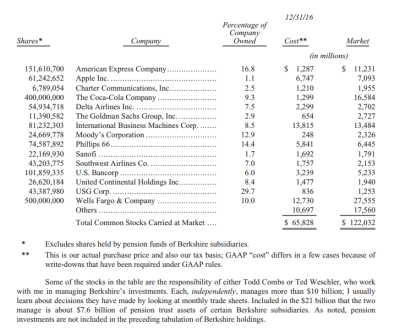