Hess Corp. (NYSE: HES) was the best energy performer so far in 2019, and it was the sixth best-performing S&P 500 stock with a 50% gain YTD. The bulk of that move took place in January. What’s interesting here is that earnings and revenue trends for the exploration and production company, offshore and midstream, are not currently expected to make a great rebound until 2020.

Arista Networks Inc. (NYSE: ANET) is a cloud networking solutions provider, and it was the seventh best S&P 500 performer in 2019, with a 48% gain YTD. Goldman Sachs reiterated its Buy rating in March and raised its target to $360 from $300, and that is not even the street-high target.

Celgene Corp. (NASDAQ: CELG) is the number one health care stock of 2019, with a gain of 47% YTD. That said, it’s because Bristol-Myers Squibb decided to reach deep down in its pockets and pull out enough cash to acquire one of the top biotechs in the nation. Enough said.

Hanesbrands Inc. (NYSE: HBI) may be best known for its tighty-whities and undershirts, but it also has Champion for athletic apparel, and it makes apparel for many brand names. While it still has not recovered to last summer’s highs, Hanesbrands was last seen up about 46% YTD and was the 10th best performing S&P 500 stock thus far.

Honorable Mention: Synchrony Financial, Up Over 38%

Synchrony Financial (NYSE: SYF) was only listed as the 24th best gainer of the S&P 500 YTD, but it was the highest ranking company we would consider to be a pure-play financial stock. It was up over 38.5% YTD, with its best gap in January, but for a better reference that was still down 4% from a year ago.

General Electric Co. (NYSE: GE) also deserves an honorable mention here. While its gain of almost 38% YTD was ranked as the 26th best among the S&P 500 stocks, this is still down 12% from a year ago. GE still would have to rally more than 200% to reach anywhere close to its post-recession highs. Sometimes the biggest losers of one period end up being the biggest gainers from snapback moves in later periods.

Investors may scratch their heads over why some of these companies have such strong gains, considering that some of the businesses are running quite well while others may have structural or industry issues working against them. Whether readers here are investors or traders, no one should chase performance merely because a stock (or a group or the market) has been rising rather than falling. A review from StockCharts.com also has been provided here on each. 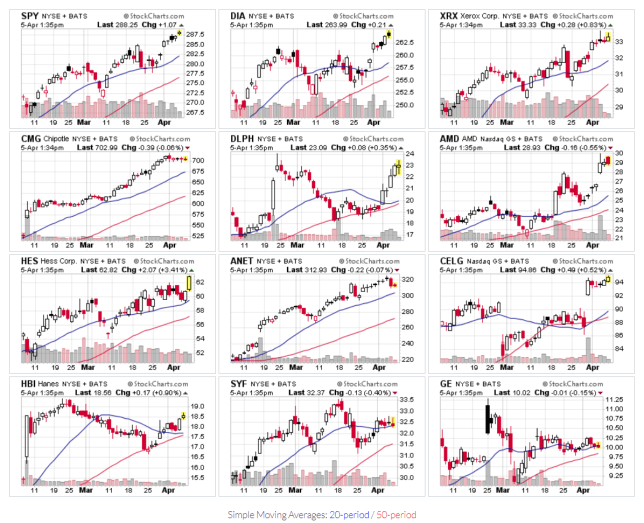