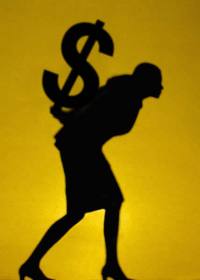 The secret to the amazing increases in productivity in the American economy is finally out. Companies in the US are not hiring full-time workers. They are gambling that they can keep their margins high by keeping a vast part of the workforce, perhaps millions of people, unemployed.

Unemployed people, it turns out to no one’s surprise, will work for very little. And, they will work without benefits, without job security, and without complaint.

According to Bloomberg, “The 6.8 million Americans out of work for 27 weeks or longer — a record 46 percent of all the unemployed — are providing U.S. companies with an eager, skilled and cheap labor pool.”

The development is a revelation, and a good one, for companies, municipalities, and states, all of which are tight on cash and unable to get credit at reasonable rates if at all. The nearly 10% unemployment rate in the US is supposed to come down late this year and early next. This assumes that companies with improved prospects will hire full-time workers as they have for decades. These workers have had pensions, benefits, and vacations. That makes a person who makes $40,000 cost $50,00o or $60,000. Employers want to bring the effective cost of that same worker down to $35,000 or perhaps $30,000.

Even if a recovery in GDP means that the US produces more goods and services for the 84% of Americans with jobs or federal and state support and for exports to other nations, many of the companies that supply these things may not hire a single full-time worker. If that is true and becomes a substantial trend, then the point at which unemployment and underemployment will begin to become better may be many quarters, if not many decades, away.

This Is The College Degree Billionaires Have Most

This City Has the Lowest Unemployment in America

This City Has the Worst Unemployment in America

COVID-19: This Is the Most Deadly Job in America