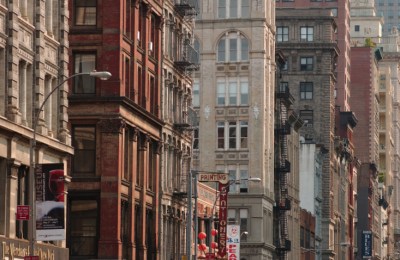 Source: Thinkstock
The New York-Newark metropolitan statistical area (MSA) is the largest in the United States, with its population of nearly 20 million. It is also the worst for job creation, according to new data from Gallup. The nation’s second largest MSA, Los Angeles-Long Beach, with a population of just over 13 million, lags significantly as well.

Even though these huge metropolitan areas lag, the national picture has improved sharply over the past several years, according to Gallup researchers:

So, even though job creation in the largest MSAs has been disappointing, measured against national trends, their numbers are still encouraging:

The areas with the lowest index scores among the top 50 MSAs are New York, San Diego and Hartford, Conn., at +20, and Virginia Beach-Norfolk, Va., and Las Vegas at +21. Although these scores are the lowest in a relative sense, they are still strong in an absolute sense.

Even with some relatively large MSAs posting good numbers, it is hard for them to balance the bad figures of the New York and Los Angeles MSAs, which have 33 million residents between them. 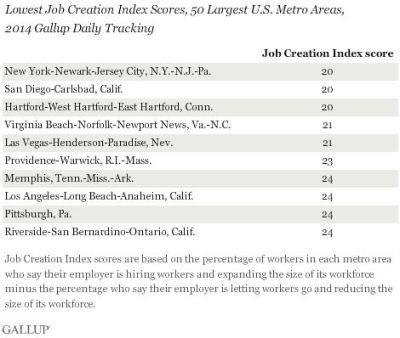 Methodology: Results for this Gallup poll were based on telephone interviews conducted in 2014, on the Gallup U.S. Daily survey, with a random sample of 201,254 employed adults, aged 18 and older, living in all 50 U.S. states and the District of Columbia. For results based on the total sample of workers, the margin of sampling error is ±1 percentage point at the 95% confidence level.

ALSO READ: 15 Cities With the Most High-Tech Jobs