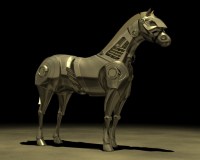 The United States shed 8.7 million jobs from the official onset of the Great Recession in December 2007 until the economy began regaining jobs in March 2010. Although the economy has since regained all jobs lost, some occupations are shrinking.

24/7 Wall St. reviewed traditionally middle class occupations that, according to the Bureau of Labor Statistics (BLS), are expected to contract in the 2012-22 period. These jobs often require no more than an associate degree and tend to offer only minimal to moderate on-the-job training.

The jobs that are projected to shrink range from office-related occupations such as couriers and messengers, word processors, and switchboard operators to light manufacturing machinists such as extruding and drawing machine setters, operators, and tenders who work with metal and plastic.

“A lot of these jobs are disappearing because in part of the increased use of the Internet and company intranets,” observed Martin Kohli, chief regional economist at the BLS.

According to Kohli, many tech jobs — including data entry keyers and computer operators — were created to work with mainframe computers, which themselves are declining in popularity.

Non-tech, courier and messenger jobs, he added are being supplanted by an increasing use of email attachments — but not all messenger jobs are disappearing.

“There really are not as many bicycle messengers as there used to be although there certainly seem to be more bicycle food delivery people,” Kohli said. “You can’t get [food] through an email attachment.”

Other occupations likely to contract involve jobs being done increasingly by customers. Reservation and transportation ticket agents and travel clerks, generally airline employees Kohli said, fall into this category as airlines are encouraging passengers to make their own reservations and print their own tickets, a trend also emerging in entertainment.

At the top of the list, the number of postal service clerks is expected to shrink by nearly one-third, a reminder of the ongoing U.S. Postal Service fiscal crisis. Also, the result of the growth of email and electronic bill paying as well as a growth in e-zines, electronic versions of what had been print magazines, all of which combine to decrease mail volume.

To identify the middle skill jobs disappearing the fastest, 24/7 Wall St. reviewed 359 middle-skill occupations classified by the BLS with the largest projected employment percentage change from 2012 through 2022. We also considered nominal employment change estimates over that period, as well as the job openings due to growth and replacement needs from the BLS. Worker characteristics, such as median annual wages, typical education needed for entry, and on-the-job training needed to reach competency came from the Occupational Outlook Handbook. We excluded categories that were similar. 24/7 Wall St. further narrowed the analysis by only considering occupations with 50,000 or more workers.