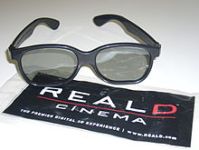 Reports from the Hollywood Reporter are not likely to move stocks on most days.  Today is no normal day.  A report from Tuesday afternoon saying that Sony Corporation (NYSE: SNE) will stop paying for RealD 3D glasses is taking a toll on RealD Inc. (NYSE: RLD) shares.

Sony claims that these glasses can cost studios $5 to $10 million per blockbuster release.  The move is expected to come on May 1, 2012, right before the summer film rush that usually has many 3D movie options.  MIB III and another Spider Man are coming in 2012.

What is amazing is that it was just yesterday that Merriman Capital outlined buyout speculation regarding RealD.  Talk about bad timing.

The report in question from Tuesday also notes that exhibitors (theaters) are not going to react well (duh!) and it also noted that many other studios are likely considering a similar move.  The estimate is that these glasses can cost up to $0.50 per film.

News Corp. (NASDAQ: NWS) has reportedly tried to pass this cost on to exhibitors but that was fought hard.  With Avatar, that could have been one major cost.  And what about the on-again off-again reports of the Star Wars episode(s) being recut for 3D?

RealD Inc. (NYSE: RLD) is down 15% at $10.38 today and shares appear to have hit a new post-IPO low of $8.89 earlier this morning as the panic grew that 3D films might be taking a hit.  Unfortunately for RealD, its entire business model revolves around the proliferation of 3D films.  Live by the sword, die by the sword.

As a reminder, there is no assurance that this move will actually stick.  Some international markets already charge for this.