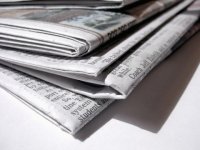 Accounting problems at Olympus may make it a takeover target. (Reuters)

HTC says a ruling on IP issues with Apple (NASDAQ: AAPL) has been delayed. (Reuters)

Best Buy (NYSE: BBY) earnings come in below expectations, due in part to competition with Amazon.com (NASDAQ: AMZN). (WSJ)

The National Transportation Safety Board calls for a ban on cellphone use and text devices in cars. (WSJ)

Commerzbank may have too small a capital reserve if eurozone financial problems worsen. (NYT)

GE’s Immelt says the company could have double-digit growth if its industrial operations do well. (FT)

Members of OPEC, including Iran and Saudi Arabia, agree the group should set a production ceiling of 30 million barrels a day.  (Bloomberg)