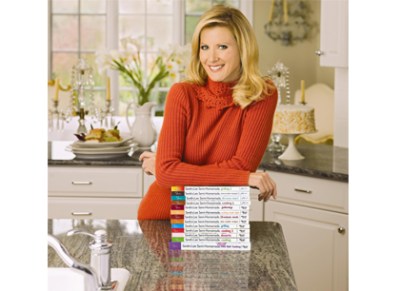 Source: Sandra Lee Magazine
Emmy-award winning lifestyle doyenne Sandra Lee is joining forces with digital invitation and event planning service Evite to expand Evite’s current offerings and create a unique digital destination where consumers can find everything they need to plan and host an event. The partnership is an exclusive multiyear deal between the leading online party and event site and one of the country’s most recognized representatives of the smart and simple American lifestyle.

Sandra Lee is best known for cooking and lifestyle books and is the editor in chief of Sandra Lee Magazine and the host of several highly rated programs on Food Network, HGTV and the Cooking Channel.

According to media sources, Lee parted ways with TV Guide earlier this year and formed her own publishing company, Simply Living Publishing. Today’s announced deal is believed to be worth more than $10 million.

Sandra Lee Magazine will create exclusive content and themes for Evite, along with exclusive invitation designs for every day, every holiday, seasonal occasions and special events. These designs will be featured in the print and digital versions of Sandra Lee Magazine. Lee will also provide video and how-to content to help users make their parties and events more fun and affordable. All content will be featured on Evite’s home page, on its Evite Gatherings and editorial sections, and as an anchor point for Evite’s new Sandra Lee Magazine gallery.

ALSO READ: The Best (and Worst) Paying Cities for Women

Evite competes with both Facebook Inc. (NASDAQ: FB), with its built-in invitation system, and privately held Paperless Post, which allows users to create custom invitations. They have stolen a march on Evite, and that is why this deal with Sandra Lee is so important to the company. The tie-up with Lee gives them a strong differentiator that is hugely popular with millions of Americans.

Evite is a subsidiary of Liberty Interactive Corp. (NASDAQ: LINTA), and it claims to send more than 200 million event invitations each year. It launched all the way back in 1998, and in some ways could be considered one of the predecessors to social media today. Its invites are said to kick off over 7 million parties and gatherings per year, or 24,000 invites every hour.

Sandra Lee said, “Together, Evite and the Sandra Lee Magazine will offer an unparalleled party planning destination inspiring and helping people to create memories that will last a lifetime.”

ALSO READ: The Best-Selling Products of All Time

The Best Movie by a Black Filmmaker

This Is The Highest Grossing Movie Actor Of All Time