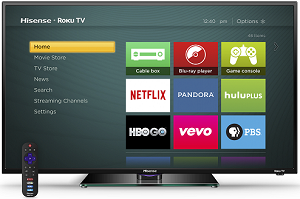 Source: Roku Inc.
While at first blush OTT sounds like a condition where kids cannot sit still, it actually refers to over-the-top-content; that is, the delivery of audio, video, and other media over the Internet without the involvement of a multiple-system in the control or distribution of the content. A new report from Jefferies surveyed the millennials, or those ages 13 to 35, about their viewing habits, and one thing’s for sure: old-school TV watching may be going the way of the dinosaurs.

OTT specifically applies to content that is delivered by a third party to an end-user device, leaving the Internet services provider only the role of transporting IP packets. While that sounds pretty technical, the best example is Netflix Inc. (NASDAQ: NFLX). Many millennials have eschewed buying cable or satellite, and watch the majority of the programs they like on a service like Netflix.

Where the team at Jefferies sees opportunity is for the big content providers, especially those that are providing shows that are on all of the top three OTT providers. The Jefferies team highlighted four stocks they are very bullish on from a content standpoint.

CBS Corp. (NYSE: CBS) is a franchise pick at Jefferies. With an outstanding prime time lineup and solid sports franchises like the NFL, March Madness College Basketball, The Masters and other top programming, the venerable network has been a sensational stock for long-term shareholders. CBS has continued to deliver stellar ratings and is poised to continue the network’s programming dominance in 2015.

The broadcasting giant is now in the midst of a significant stock repurchase process, and many on Wall Street expect CBS to shrink its share base by up to 25% over the next two years.

The Jefferies team points out that content licensing revenue drove the upside in first-quarter earnings, with Bell Media starting to contribute to earnings. Similar to the broadcasting giants rivals, the analysts expect CBS to look to book content licensing more evenly over the year, even while they still expect it to decline slightly this year.

With CBS programming and content on the big three OTT providers, which also include Amazon Instant Video and Hulu, the stock is an outstanding buy. CBS investors are paid a 1% dividend. The Jefferies price target for the stock is $68 and the Thomson/First Call consensus price target is $63. Shares closed Monday at $59.67.

This company is a top consumer media company with multiple streams of income to push revenue, and many Wall Street analysts see Walt Disney Co. (NYSE: DIS) stock outperforming on a near-term and long-term basis. With the movie studio business poised to improve, as with accelerating theme park business, the network programming continues to drive viewerships with extensive sports programming. Combining that revenue growth with the company’s solid media networks and interactive presence, and 2015 revenue estimates could be conservative.

ALSO READ: Fiber to the Premises Is Back: 4 Top Stocks to Buy Now

Twenty-First Century Fox Inc. (NASDAQ: FOXA) is also a top media stock to buy at Jefferies, and the company boasts a wide silo of cable and network programming to go along with solid movie production revenues. Combined with dominant cable news programming, and the NFL on the network stations, investors have the advantage of owning a diverse and growing company.

Many Wall Street analysts, including the Jefferies team, feel that the value of video content continues to increase even as the distribution markets mutate. Following the split from News Corp., Fox now operates a global entertainment company that is well situated to capitalize on increasing content value.

Time Warner, like CBS, has a spot on all three of the top OTT providers, and with an absolute ton of content that the company sells through DVDs, Blu-ray discs and electronic sell-through, as well as licensing home entertainment and content to international television networks and SVOD services, the future is very bright.

The Jefferies team points out in the report that Netflix has overtaken traditional TV in term of viewership. That is a stunning fact given the adoption of Netflix has been essentially in this new century. The times are changing, and the content providers are a good spot for growth investors.