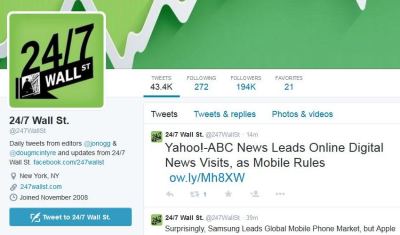 Source: Courtesy of Twitter
Not even advice from a big Twitter Inc. (NYSE: TWTR) shareholder can lift its stock from near a 52-week low. That holder, Chris Sacca, thinks the company should promote itself as more user friendly. Unfortunately, it would be hard to find a social media platform that is easier to use, which undercuts his assertion. Sacca’s advice fell on deaf ears, as far as Wall Street was concerned.

The simple explanation of why Twitter trades at $37 in a 52-week range of $56 and $33 is that investors do not believe advertisers have been drawn to its platform in large enough numbers. However, there is an alternative view that Twitter spends too much money. First-quarter revenue rose 74% to $436 million. Twitter management likes to use a profit measure different from GAAP income, so:

Investors were disappointed that direct response marketers did not use the social network in greater numbers. But its ad revenue is already greater than that of AOL Inc. (NYSE: AOL).

ALSO READ: This Is Why Microsoft Bought Skype

By another critical measure, the company is still growing rapidly:

Investor anxiety was primarily because of Twitter management forecasts:

Twitter’s outlook for the second quarter of 2015 is as follows:

A look at Twitter’s 10K shows how it spends money. The company has 3,799 employees. Its general and administration expenses ballooned to $189 million last year. While it makes sense for sale costs and cost of revenue to rise, it appears Twitter has way too many other people:

General and administrative expenses consist primarily of personnel-related costs, including salaries, benefits and stock-based compensation, for our executive, finance, legal, information technology, human resources and other administrative employees. In addition, general and administrative expenses include fees and costs for professional services, including consulting, third-party legal and accounting services and facilities and other supporting overhead costs that are not allocated to other departments.

While there may be a reason for this heavy cost, Twitter has done a poor job explaining it.

No wonder the stock is under siege, given the revenue problems without cost control to mitigate them.