Facebook Inc. (NASDAQ: FB) was looking all set to have a great 2018. Its shares were rising in January, and analysts kept lifting price targets. Then came the market sell-off and the volatility, but what really nailed Facebook has been the ongoing ad targeting around the elections and its latest data security issues. With founder and CEO Mark Zuckerberg making an appearance in front of congressional inquiries, what if all the fundamental issues out there were simply taking a back seat to the developing pattern on Facebook’s chart?

Traders and investors who use technical analysis are quite different from fundamental investors. The fundamental investors think about earnings power, the macroeconomic picture, microeconomics about how a company fits into the world, regulation, dividends, short-term and long-term expectations, and a slew of other issues. Technicians simply look at a chart and make their decisions based on price history and what it says about the future.

At $160 a share or so, Facebook has recovered handily from its recent lows of close to $150. It is also still way down from the $195 peak seen at the start of February. The problem that some technicians are going to have is that Facebook’s stock chart is nearing what is called the death cross pattern.

The name sounds awful, but it is not always as bad as it sounds. It also is not necessarily a death sentence. The so-called death cross chart pattern occurs when the 50-day moving average crosses below the 200-day moving average. According to Investopedia’s definition:

It is named a death cross due to the X shape it makes when the trend is charted and is often considered a sign of further losses for a particular stock.

While Facebook has not yet seen its death cross come into play, it looks to be a few days away. According to StockCharts.com, the 50-day moving average is $174.59, and that pattern has been coming down rapidly from about $182.50 less than a month ago, even after the stock started to bounce. Facebook’s much longer-term 200-day moving average is shown to be $173.08, after it had been peaking out over the past few weeks.

If Facebook shares do not get a big bounce after the congressional hearing, which few traders and investors are expecting, then the death cross is going to get more media and online coverage. It does not automatically have to imply that Facebook shares will be crashing, but it’s going to make many technicians say the easy money has been made and that maybe the shares have to tread water or drift lower for a while before the big recovery can be seen.

And just to prove that Facebook doesn’t have to see its shares get wrecked under a death cross, this same sort of pattern was seen at the tail end of 2016 and start of 2017, back when its shares were trading at $120 or so.

There is one other consideration about current business and metrics on a forward-looking basis. Facebook currently has a $462 billion market cap, after having peaked at about $560 billion earlier this year.

As far as some fundamental analysis, analysts on Wall Street have started to trim their Facebook price targets, though without any massive analyst downgrades from the bulge bracket firms that might spook investors. Those seen in recent days are as follows:

Also worth noting is that the short interest of 26.886 million shares as of March 15 had shown three consecutive gains and was the highest short interest reading in at least a year.

A two-year Facebook chart from StockCharts has been included below. 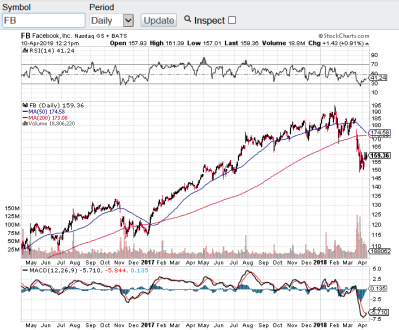