Super Bowl LIII between the New England Patriots and Los Angeles Rams is forecast to drive $320 million in betting. That is about double the sum wagered on the game between the Patriots and Philadelphia Eagles last year.

Sports betting news website VSiN reported that one reason for the rise is that last year’s Super Bowl fell on a date when legal betting was only allowed in Las Vegas. A Supreme Court decision has allowed that to spread to seven other states. The largest contributors to the rise will be $113.75 million bet in New Jersey and $12.25 million in Mississippi.

VSiN believes that the sharp rise is the continuation of a trend that will extend into next year:

We’ll see in the coming weeks how close we came on this forecast, but it’s clear that sports betting is continuing to explode in popularity (or at least in mainstream acceptance out in the open) and isn’t expected to slow down anytime soon. In fact, we can safely project that this year’s record will be short-lived as we’ll probably have twice as many states with legalized sports betting by this time next year and a legal Super Bowl 54 handle of at least $500 million. 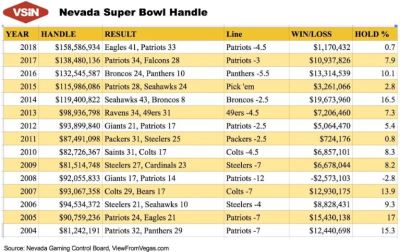