2020 Sports Coronavirus Ticket Market Losses Could Be as High $17B

The COVID-19 pandemic and its associated stay-home and social distancing orders have decimated several U.S. industries. Airlines, for example, saw passenger traffic fall by more than 90%. Another industry hit hard by the lockdowns is professional sports.

The pandemic forced the NCAA to cancel March Madness, the NBA has postponed and adapted its playoffs to begin in late July, and major league baseball (MLB) hasn’t played a single game yet. The entire big-league season is in jeopardy of being canceled as a result of a dispute between players and owners.

The cost of the COVID-19 outbreak to team owners could reach a total of $17 billion, according to a report from TicketIQ, a ticket sales site for sports and musical events. That loss reflects a worst-case scenario, where both the NFL and College Football seasons were played in empty venues.

The following chart from TicketIQ shows how much professional and college teams stand to lose based on average secondary market ticket prices. A full-season of no ticket sales would cost MLB more than $5 billion, while an NFL season played in stadiums filled only to 50% of capacity would cost the teams $2.4 billion in ticket sales. The total is about half the expected loss if the football seasons are wholly canceled. 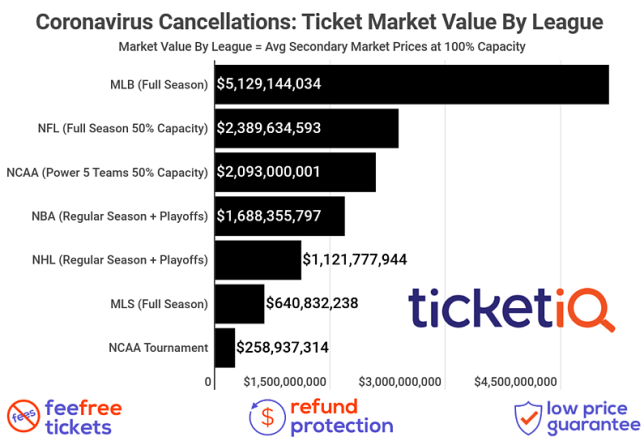 Sportsbooks are still taking bets on both MLB games and NBA playoff games for this year, but if the games aren’t played, the money has to be refunded.

The NFL, which draws more bettors than any other sport, plans to play games as usual this fall. As recently as May 24, the league’s executive vice president of operations said the NFL is “planning to have full stadiums” for the 2020 season unless “the medical community” provides other direction. A full NFL season with full stadiums would result in around $5.5 billion in ticket sales.