The commercials are supposed to show employees describing cost savings for shoppers, the company’s charitable donations, and its efforts to provide health insurance to eligible workers.  One ad is featuring founder Sam Walton, although they are probably leaving out the part how I think Sam Walton would roll in his grave if he saw how the company is being run now.

These guys still aren’t getting the message from the Main Street nor from Wall Street. The company needs to make a sacrifice and essentially start over.  It needs a new clean and fun image and if what I read into the commercial descriptions was remotely at all the way this is going to come out, then they are just making themselves continue to defend the same daily routine without making real changes to their image.

The company competes on price and price only, and that is the only customer loyalty the company has.  The company needs to stop trying to defend itself and make some serious changes.  Wall Street has actually dealt reasonably well with lower sales and a tarnished image, so the company needs to decide that it is going to clean house and mike nice-nice with the public (and ultimately Wall Street).  Their old “new store roll-out initiative” hasn’t gotten much discussion at all and they need to focus on that and how they are going to make the customer shopping experience better.  They are going to ultimately have to make some sacrifices to profit margins in the stages with some new initiatives and what they should really do is actually listen to some of these anti-Wal-Mart advocate points without going instantly on the defensive.

I noted before that the one CEO in corporate America that most resembled Darth Vader was Lee Scott and that he was one of the ten CEO’s that needed to go.  I noted the same about Bob Nardelli of Home Depot back in December too.  The board needs to gang up on Lee Scott and get him out of there, and if not some of the bigger shareholders need to startrattling the cages with the Walton heirs to protect their billions of dollars.  The CEO of Wal-Mart needs to be able to start conveying care and fun, and it is obvious Lee Scott is not going to ever be able to fit that bill.

As long as the economy isn’t at the point where ALL Americans are watching expenses down to a penny, customers want “greater shopping experiences” now instead of “only lowest prices.”  This is really just part of the business cycle of a company that has reached a pinnacle, but it can take some steps now or can allow the business and history books use it as a case study about how it grew and grew before entering a long-haul faltering period.

This seemingly never-ending saga reminds me of the problems that were starting in 2004 when I was living in Chicago and saw the magazine cover for Conscious Choice titled “Wal-Mart Ate My Neighborhood” (picture below). 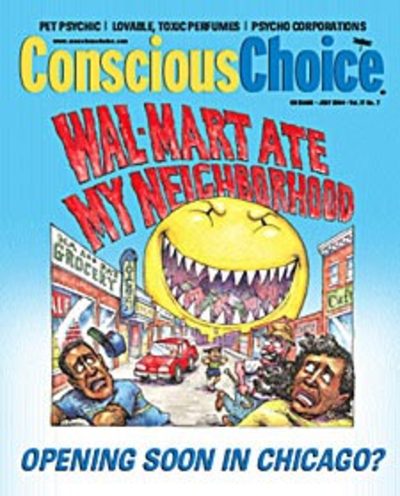