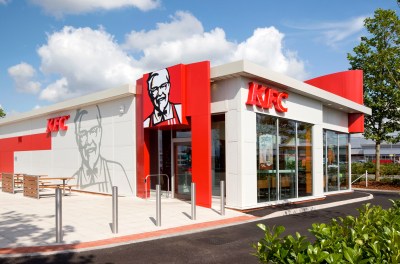 Source: courtesy of KFC
Yum! Brands Inc. (NYSE: YUM) closed down 3% ahead of earnings, mostly as investors wanted to get out out of the way ahead of the fast-food giant’s earnings.

This marks the 11th consecutive year we delivered at least 13% growth, which puts us in an elite group of high-growth companies. We also take satisfaction with our record level of international development in 2012 which lays the foundation for future growth and makes Yum! a leader in emerging market development. … [A]s a result of adverse publicity from the poultry supply situation in mid-December, China KFC sales experienced a sharp decline. Due to continued negative same-store sales and our assumption that it will take time to recover consumer confidence, we no longer expect to achieve EPS growth in 2013.

The troubles in China have led the firm to cut its EPS forecast to a full-year loss decline for 2012 EPS in the “mid-single” digits, not including special items. Yum! expects first half sales in China to decline, but to pick up again in the second half of the year. The consensus estimate for the full-year called for EPS of $3.57 on revenues of $14.33 billion. Taking Yum!’s mid-single digit decline to be 5%, that indicates a back-of-the-envelope figure of around $3.09 for 2013 EPS.