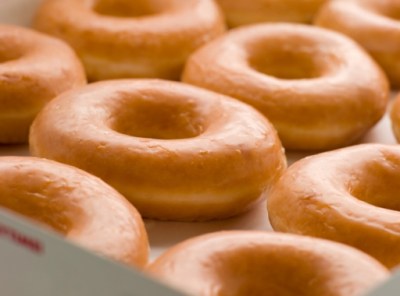 Source: Thinkstock
Krispy Kreme Doughnuts, Inc. (NYSE: KKD) saw its shares getting creamed in the after-hours session on Monday. The company’s first quarter earnings of fiscal 2015 met estimates at $0.23 EPS, but revenue rose by less than 1% to $121.6 million in revenues. Thomson Reuters had estimates of $0.23 EPS, but revenue expectations were $126.7 million. This was one of the most active stocks on downward volume in the after-hours trading session.

Light revenues was one thing, but lower guidance for this year’s earnings expectation is really adding a  slam to the donut maker. Krispy Kreme now sees earnings of $0.69 to $0.74 per share from $0.73 to $0.79 per share previously expected. Thomson Reuters was looking for $0.78 per share.

The company did say that its system-wide store count rose by 3.3% since year-end to 855 company and franchise shops worldwide, and it also said that domestic same store sales rose by 2.3%. The problem is that constant currency international franchise same store sales declined 2.2%. Operating income rose 6.6% in the last quarter to $16.2 million from $15.2 million, while the adjusted net income rose 12.2% to $15.8 million.

It sounds great that this last quarter was the highest quarterly pretax earnings for a single quarter in over ten years, but the company also pulled the blame-game on severe winter weather adversely affecting its store sales and off-site sales.

ALSO READ: 11 Ways to Avoid the Next Market Crash

The lower annual income guidance takes into account the first quarter performance, higher investment costs for a new enterprise resource planning system, and higher costs tied to executive management succession. Achievement of the revised forecast would represent a year-over-year increase of between 13% and 21% in adjusted earnings per share from the $0.61 per share reported for fiscal 2014 which, was, in turn, up 30% from fiscal 2013.