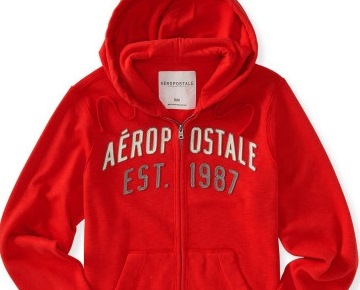 Source: courtesy of Aeropostale Inc.
Apparel retailers operate in a highly competitive environment. They may sell fashionable items for a few years and then, suddenly, consumers will flock to something else. This leaves apparel retailers struggling financially and trying to figure out how to bring their customers back into the fold.

Apparel retailers may want to do away with their brick-and-mortar operations altogether, which come with leasing and maintenance costs, and partner up with Amazon.com Inc. (NASDAQ: AMZN). After all, Amazon commands a 9% market share in the retail discretionary sector. Apparel retailers can redefine themselves entirely as a branded apparel distributor, utilizing Amazon’s expanding distribution infrastructure to distribute their clothing.

Aeropostale Inc. (NYSE: ARO) is slowly coming to the understanding that it may need to turn to e-commerce to survive in the future. Its latest 10-K indicated:

Based on changing consumer patterns, we closed 126 P.S. from Aéropostale stores, primarily in mall locations, on or around the end of fiscal 2014. We also continue to focus on faster growing sales channels, including off-mall locations, e-commerce and international licensing of P.S. from Aéropostale. We are also exploring other potential third party distribution channels.

Perhaps Aeropostale could take it two steps further and focus exclusively on licensing all of its products to someone else and make Amazon the sole seller. Other branded apparel companies such as American Eagle Outfitters Inc. (NYSE: AEO) could follow in the same footsteps in an effort to avoid footing expensive leaseholds and labor for the stores.