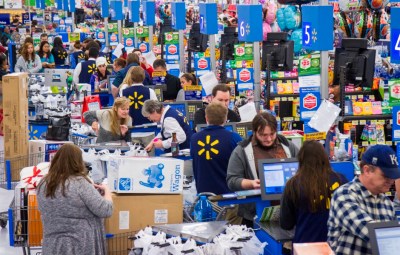 Source: courtesy of Wal-Mart Stores Inc.
There is a big movement taking place in labor and wages inside America around a minimum wage or livable wage. Many companies are not on board with instantly ramping up their wages, much of which has to do with profitability and pricing of the goods and services. Several companies have been or are making efforts on wages and labor costs, and some of it may be just starting to come through on earnings.

The first thing that has to be considered is that this is a social hot-button, and another thing to consider is that the issue of wages and labor costs may take years to play out before consumers, business owners, and employees figure out a fair balance over the matter.

Retailing giant Wal-Mart Stores, Inc. (NYSE: WMT) came out with its second quarter earnings announcement on Tuesday morning. Wal-Mart beat on revenue but not on earnings. In the most recent quarter, Wal-Mart’s operating income declined 8.2% in the United States, 1.5% in the international segment when factoring out foreign exchange and 13.4% in Sam’s Club. Wal-Mart’s wage and salary increases made a huge impact. Wal-Mart’s stock was down 3% in Monday’s mid-day trading.

Wal-Mart’s CEO, Doug McMillon, characterized this as an investment in worker productivity. The line of reasoning here is that if employees feel that they have a future with the company and a chance of making a decent living, they will take better care of customers. The company’s CEO did indicate that it may take time for Wal-Mart’s investment to come to fruition.

Global restaurant chain McDonald’s Corp. (NYSE: MCD) also announced a wage increase for employees at company owned restaurants. However, other problems, such as declining worldwide traffic and intensifying competition stemming from the change in consumer tastes, may override any goodwill that created with employees at its company owned restaurants. In the most recent quarter, McDonald’s saw its revenue inch ahead a mere 1% year-over-year when excluding foreign currency translations. Its net income declined 4% year-over-year excluding foreign currency translations.

Target Corp. (NYSE: TGT) is set to announce its earnings on Wednesday. Target also boosted wages for its workers. Target intends to make up for these increases through gains in efficiency and cost cutting. The average analyst estimate has Target’s revenue and EPS coming in at $17.4 billion and at  $1.11, respectively. It will be interesting to know whether increased wages impacted its net income in such a negative way as well.

Wal-Mart still needs to work through other issues as well, including employee theft and pharmacy reimbursements. Wal-Mart’s management also lowered its 2016 EPS estimate. It will take a while for analysts to revise their estimates, if they revise them. Thomson/First call has the mean target price pegged at $79.95 per share, which represents a  15% potential increase from its current stock price.