The Richest Cities Where No One Wants to Move 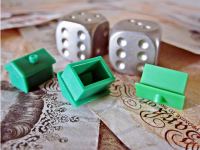 Source: Flickr, Images of Money
Many Americans still are holding off on buying homes in some of the country’s most expensive cities. While home prices fell 23% on average in the largest cities since the housing crisis began, for many home buyers the drop was not enough. Based on a new report released by Trulia, 24/7 Wall St. identified the 10 metropolitan areas to which no one wants to move.

Read: The American Cities Where No One Wants to Move

Trulia ranked the 100 largest metropolitan areas by their Metro Movers ratio, which measures homebuyer activity and interest metropolitan areas. The ratio compares the number of online searches of local residents looking to buy elsewhere to the number of out-of-town homebuyers looking for real estate in the area. According to the report, a ratio of two means that there are twice as many home searches by people looking to leave the area as to move in. All of the cites no one wants to move to have a ratio higher than two.

The cities that attract few buyers experienced modest home price declines since the recession began, especially relative to their high home value. As a result, home prices in these areas are forecast to decline further, and homebuyers are waiting until they do. All of the 10 cities no one wants to move to have among the most expensive homes in the country. Newark and Bethesda, two cities with twice as many people looking to leave as looking to move in, have among the top 10 highest median home values in the country. Home prices in these cities declined at just the national average, and next year, they are projected to decline more.

People want to move to cities that are much more affordable. According to Jed Kolko, Trulia’s Chief Economist, “Most of the cities attracting lots of search activity from outsiders had huge price declines during the housing bust. They’re now much more affordable than they were during the boom — especially to people in cities where prices are still high.” As a result, buyers are now interested. “Baby boomers thinking about retirement see Florida as a much better deal than it was a few years ago,” Kolko says.

People do not want to move to cities that are largely older and more densely populated. Regions in the northeast that are of little interest to out-of-town buyers include Philly, Newark and New Haven. Other older metropolitan areas include San Jose and Seattle. Kolko suggests the move away from urban areas has a lot to do with expense. “Even though people often say they want to live in urban neighborhoods where they can walk more and drive less, they get more for their buck where the car is king. Most long-distance searches are toward smaller, suburban, more sprawling areas, not toward the older, dense cities of the northeast.”

24/7 Wall St. reviewed Trulia’s Metro Movers Report to identify the 10 metro regions where there are more than two searches by residents looking for homes elsewhere for every one person not from the region looking to move to the city. To reflect additional housing and economic conditions in the region, we included data from the recently published Q3 2011 home price forecasts, as provided by Fiserv-Case Shiller. We also included median home prices, decline in prices from prerecession peaks, unemployment rate from November, 2011, and projected home prices through 2016.