The States with the Widest Gap Between Rich and Poor 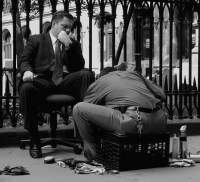 Source: flickr/incendiarymind
While some income inequality is generally considered necessary in a free market economy, extreme inequality is not. In the United States, there are far more poor people than wealthy ones — and the gap between the rich and poor is growing. Income inequality is a problem among more developed countries, but the U.S. is among the worst.

The U.S. has the fourth worst income inequality compared to other developed countries, according to the Organisation for Economic Co-operation.  Though some are better than others, all 50 states have higher inequality than most of the developed world. 24/7 Wall St. examined the 10 states with widest gap between the rich and poor.

Scored between one and zero, the Gini coefficient is a measure used by economists to rank income inequality. Zero reflects perfect income equality, where everyone makes the same. A score of one reflects an economy where one person has all of the money and everyone else has none. Higher numbers represent significant concentrations of wealth, extreme poverty, and a limited middle class.

While the states we examined have high inequality, they’re not necessarily wealthy states. Alabama, Mississippi and Tennessee, have among the lowest median incomes in the country and also have the worst income inequality scores. States with the highest incomes, including Connecticut, Massachusetts and California, are also on the list.  All ten states have — relative to the size of their middle class — a large percentage of their population living at one end of the income spectrum, and in some cases large percentages at both ends.

While having high or low median income does not appear to correlate to high income inequality, education does. Looking at the percentage of the population 25 years and older with a high school diploma, eight of the 10 are in the bottom third. This includes California, Texas and Mississippi, which have the three least educated populations in the United States.

These are the states with the widest gap between rich and poor.