Heart disease is the leading cause of death in the United States, accounting for one out of every four deaths each year. Some estimate the costs of heart-related health problems will rise to as high as $3.6 trillion annually within a decade. Cardiovascular problems can lead to heart attacks, which range from undetectable, minor incidents to heart failure and death. The prevalence of heart disease varies considerably across the United States.

24/7 Wall St. reviewed the incidence of heart attack in 190 U.S. metropolitan areas. We examined the percentage of adults in each area who have been told by a medical practitioner that they have had a heart attack. These data came from “2015 Community Rankings for Incidence of Heart Attack,” a report from Gallup-Healthways. Charleston, West Virginia leads the nation as the city where the highest share of adults have a history of heart attack.

Ten of the 15 cities with the highest prevalence of heart attack are located in the Southern United States. In a study tracing heart disease mortality from 1973 to 2010 that was published in March, CDC researchers found that the geographic patterns of heart-related deaths have shifted dramatically. The highest heart disease mortality 40 years ago was concentrated in the Northeast. Today, the highest concentration has shifted to the South.

Click here to see the cities where the most people have heart attacks.

Click here to see the cities where the fewest people have heart attacks.

Dr. Matthew Ritchey is an epidemiologist with the Division for Heart Disease and Stroke Prevention at the Centers for Disease Control and Prevention. In an email to 24/7 Wall St., Ritchey said “The consistent progression southward over the past few decades suggests that the pattern is not random – and could be attributed to geographic differences in community-level prevention and treatment opportunities.” 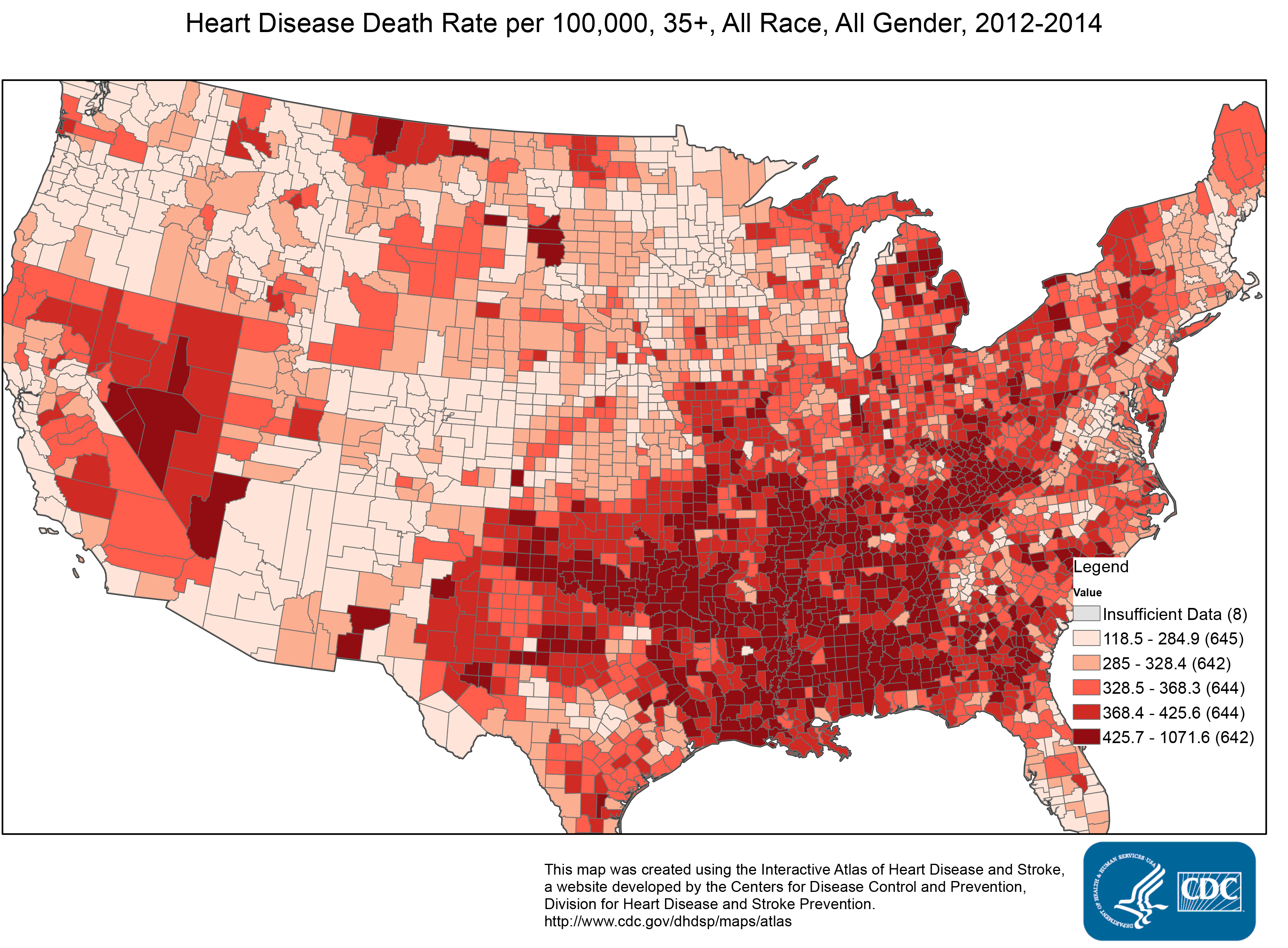 Gallup’s report highlighted the heavy toll heart disease takes on individuals, families, and caregivers. Individuals with a history of heart attack are considerably more likely than those who have never been diagnosed to miss work and be admitted to a hospital, for example. The average American reports seven physically or mentally unhealthy days in a given month. Of the 15 metros with the highest prevalence of heart attacks, 13 report greater average numbers of unhealthy days in a month.

The percentage of adults who smoke in 11 of the 15 metro areas on this list exceeds the national adult smoking rate of 17%. Similarly, the obesity rate in eight of the 15 areas exceeds 30%, higher than in most metropolitan areas.

A range of socioeconomic factors appear related to a high prevalence of heart attack. Just as high educational attainment in a population often accompanies positive health outcomes, low educational attainment is often tied to poor health outcomes. Without a college degree it can be difficult to earn a decent wage — income needed for medical expenses, accessing exercise venues, alleviating stress from finances, etc.

To identify the cities where the lowest percentage of adults have had heart attacks, 24/7 Wall St. examined “2015 Community Rankings for Incidence of Heart Attack,” a Gallup-Healthways report that reviewed 190 U.S. metropolitan areas. Gallup’s survey was based on 353,983 telephone interviews with U.S. adults across all 50 states and the District of Columbia and was conducted from January 2, 2014 to December 30, 2015. Participants were asked, “Have you ever been told by a physician or nurse that you have had a heart attack?” The percentage of adults with high blood pressure, high cholesterol, a history of diabetes or depression, as well as the obesity rate also came from Gallup. Median household income, poverty rate, and educational attainment came from the U.S. Census Bureau’s 2015 American Community Survey. The smoking rate came from County Health Rankings and Roadmaps.

These are the cities with the highest risk of heart attack.