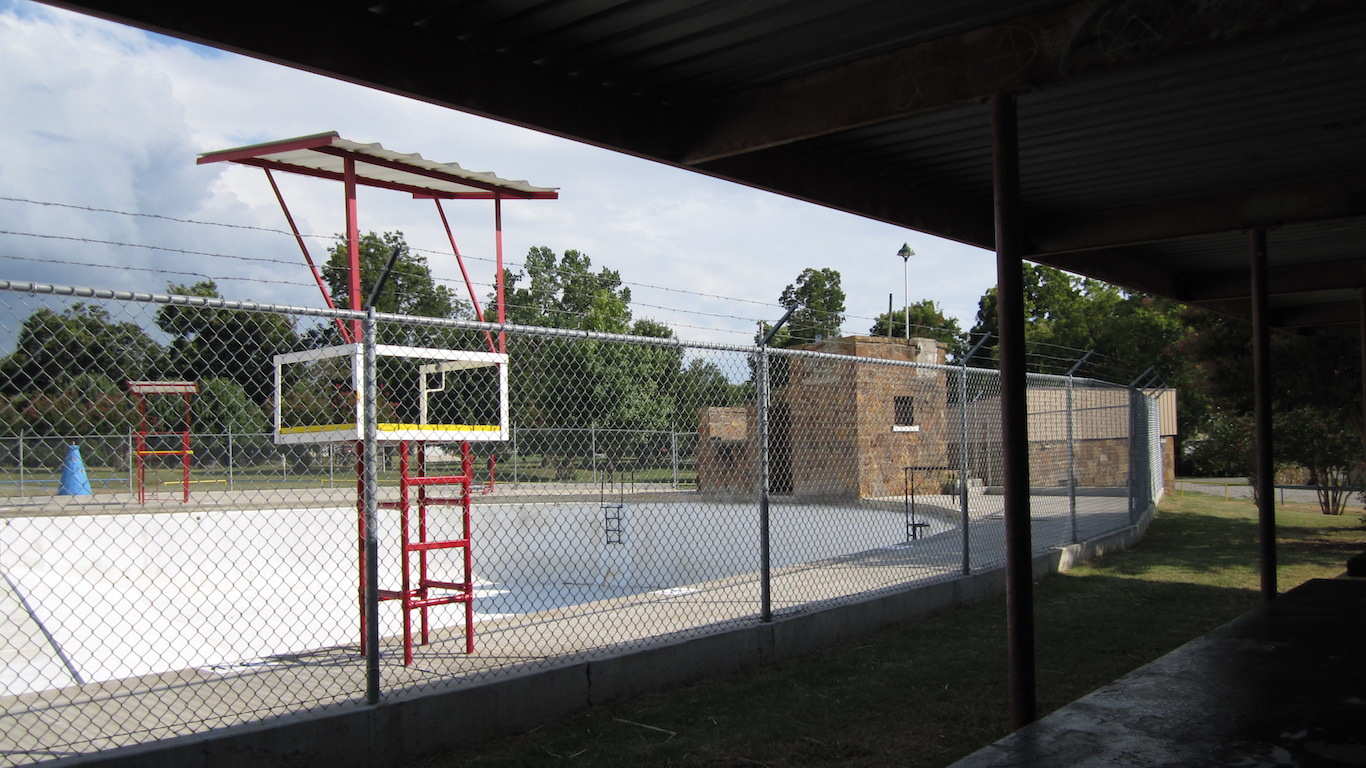 While prisons provide relatively high paying jobs, they are often detrimental to local economies.
The Davis Correctional Facility, which opened in Holdenville, Oklahoma in 1996, does not appear to have helped its home city very much. More than one-quarter of area residents live at or below the poverty line, well above the 15.6% national poverty rate. Additionally, 11.5% of area homes are effectively abandoned, the highest vacancy rate in Oklahoma.

For some remaining Holdenville residents, homeownership has become slightly more profitable in recent years. The typical area home is worth $53,300 today, up 9.2% from five years ago. Over that same period, area population is up by 4.6%. 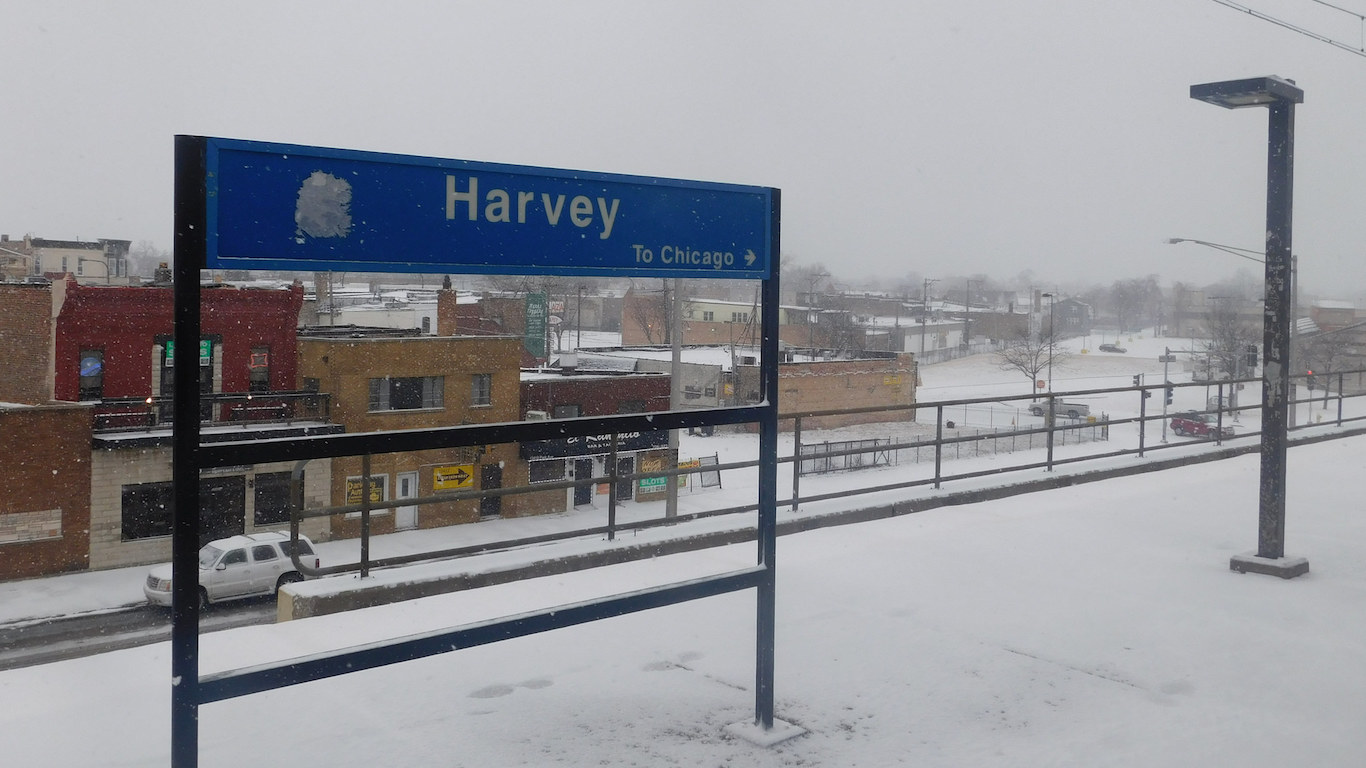 More than 1,000 homes in Harvey, Illinois have been abandoned, or nearly 12% of all area homes. The city’s exceptionally high vacancy rate has likely exacerbated housing market problems in Harvey as home values have been plummeting in recent years. The typical area home is worth $81,000, 19.4% less than its value five years ago. Due in large part to declining property values, roughly one third of homes in Harvey are worth less than what is owed on them. As is often the case in areas with declining home values and high vacancy, people have been leaving the city. Over the last five years alone, Harvey’s population is down by about 10%.

The Chicago suburb municipality is facing financial hardship. According to findings of a recent audit, the city is on the brink of insolvency, likely the result of mismanagement. 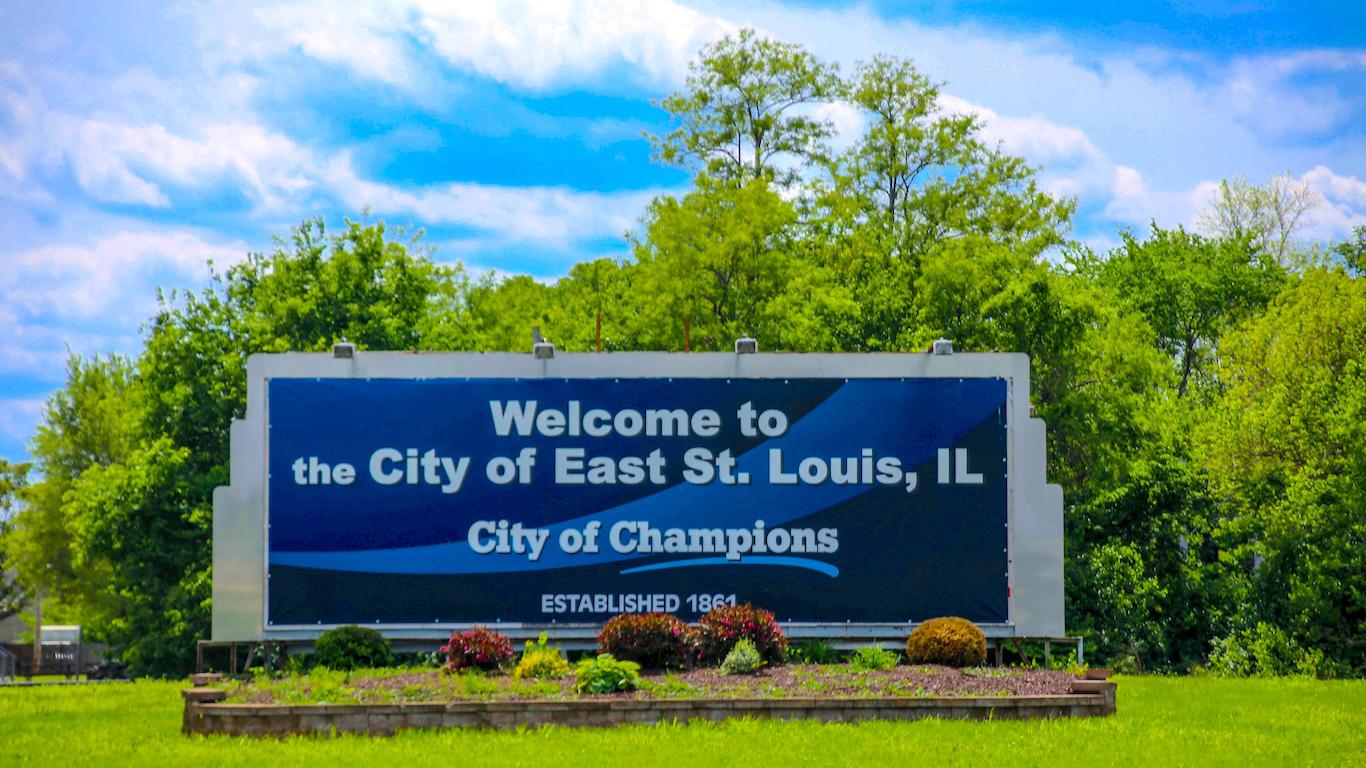 East St. Louis, situated across the Mississippi River and the Missouri state border from St. Louis, has a higher share of vacant homes than any other city in Illinois. There are well over 2,000 abandoned homes in East St. Louis, or nearly 12% of all residential properties in the city. To many of those living in the city, homeownership may be more of a financial liability than a boon. Due to declining property values — home prices dropped 7.3% in the last half decade — more than 8% of East St. Louis homeowners owe more on their home than the property is worth.

A shadow of its former self, the city is one of many to struggle due to the manufacturing sector’s decline in the second half of the 20th century. The city lost more than 13,000 jobs between 1960 and 1987, largely due to plant shutdowns. The resulting urban decay led the U.S. Department of Housing and Urban Development to at one point name East St. Louis the “most distressed city in America.” The city is now home to only 27,000 people, down from a peak of more than 82,000 in 1950. In the last five years alone, the city’s population shrunk by 8.1%. 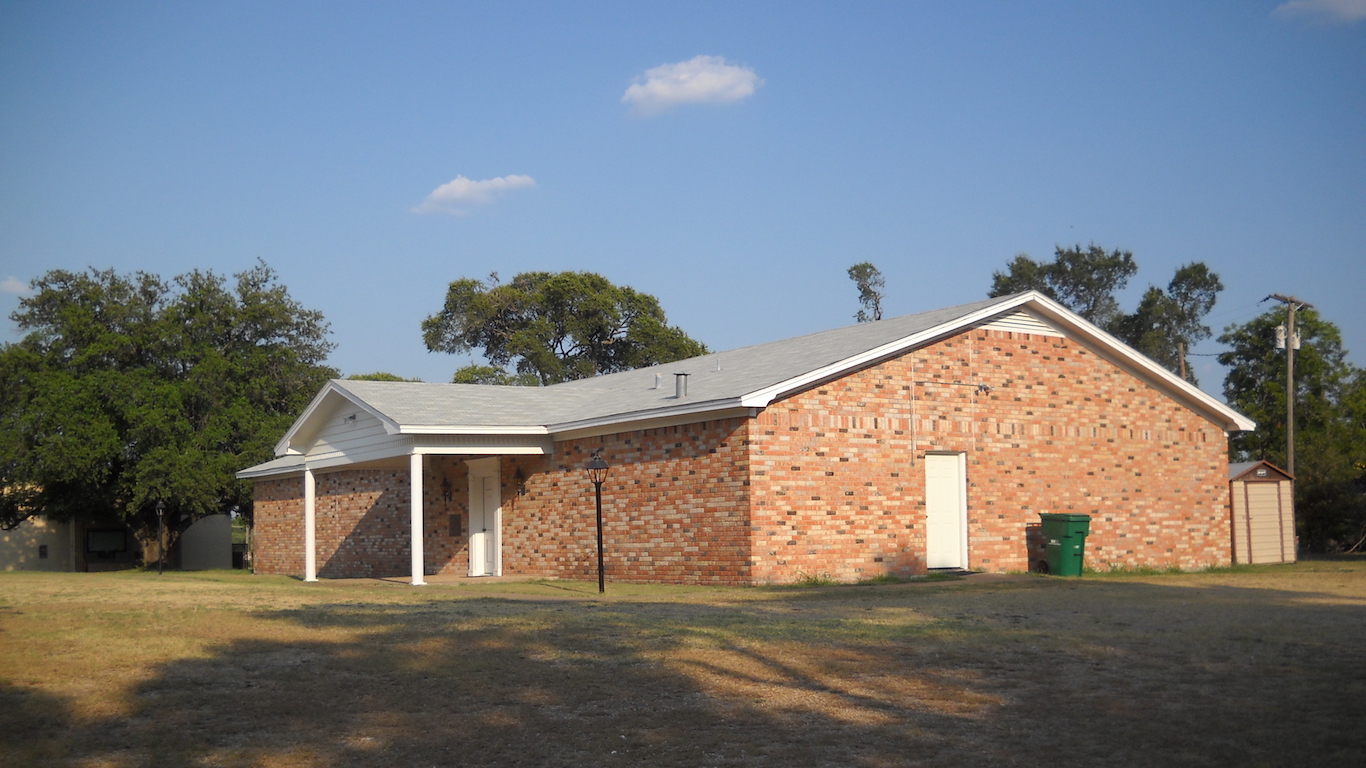 Marlin has a higher share of abandoned homes than any other city in Texas. Roughly 12% of homes in the area are vacant, a far higher share than the national home vacancy rate of 1.6%. Poor infrastructure in the central Texas town is likely not helping solve regional vacancy. The city’s water plant failed on Thanksgiving Day last year, leaving residents without tap water for a week. At a city council meeting earlier this year, residents pleaded with officials to address the city’s crumbling roads.

Like many U.S. cities with high vacancy rates, many Marlin residents are likely struggling. Well more than a third of area residents live at or below the poverty line, more than double the national poverty rate. Additionally, the median home value in the area is only $52,200, less than a third of the value of a typical American home. 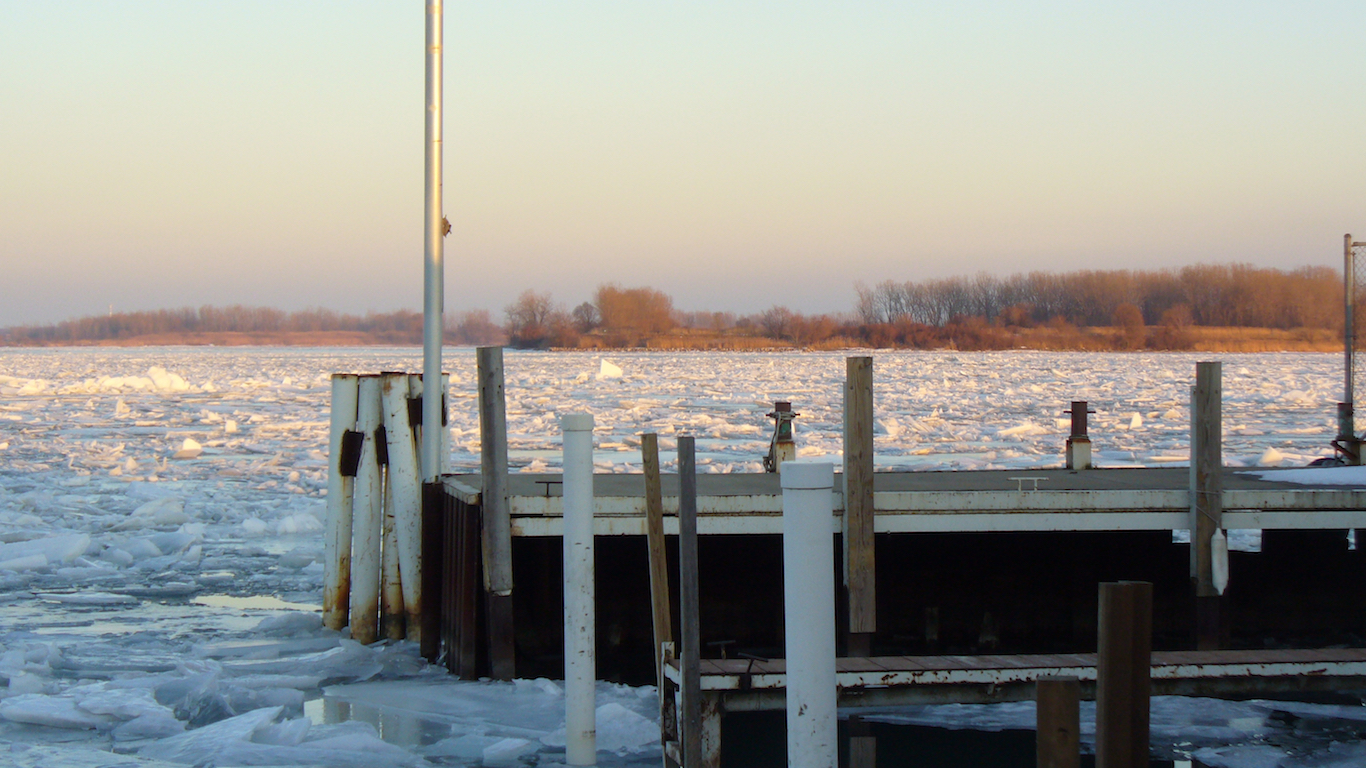 Ecorse, Michigan is part of the Detroit metropolitan area, and like many towns in the region, it is suffering from economic depression that seems only to be getting worse. The area’s already low median home value of $74,400 in 2009 fell to just $39,200 by 2014. Of the more than 4,800 towns and cities with available data for 2014, Ecorse is one of just 10 for which the typical home costs less than $40,000. About 29% of city residents live in poverty, nearly double the national poverty rate.

As is often the case in areas with a weak economy and inexpensive homes, Ecorse’s population is declining and a high share of its homes are vacant. The city’s population of 9,401 is down from 10,171 five years earlier, a 7.6% drop. About 12% of property in the area is vacant.