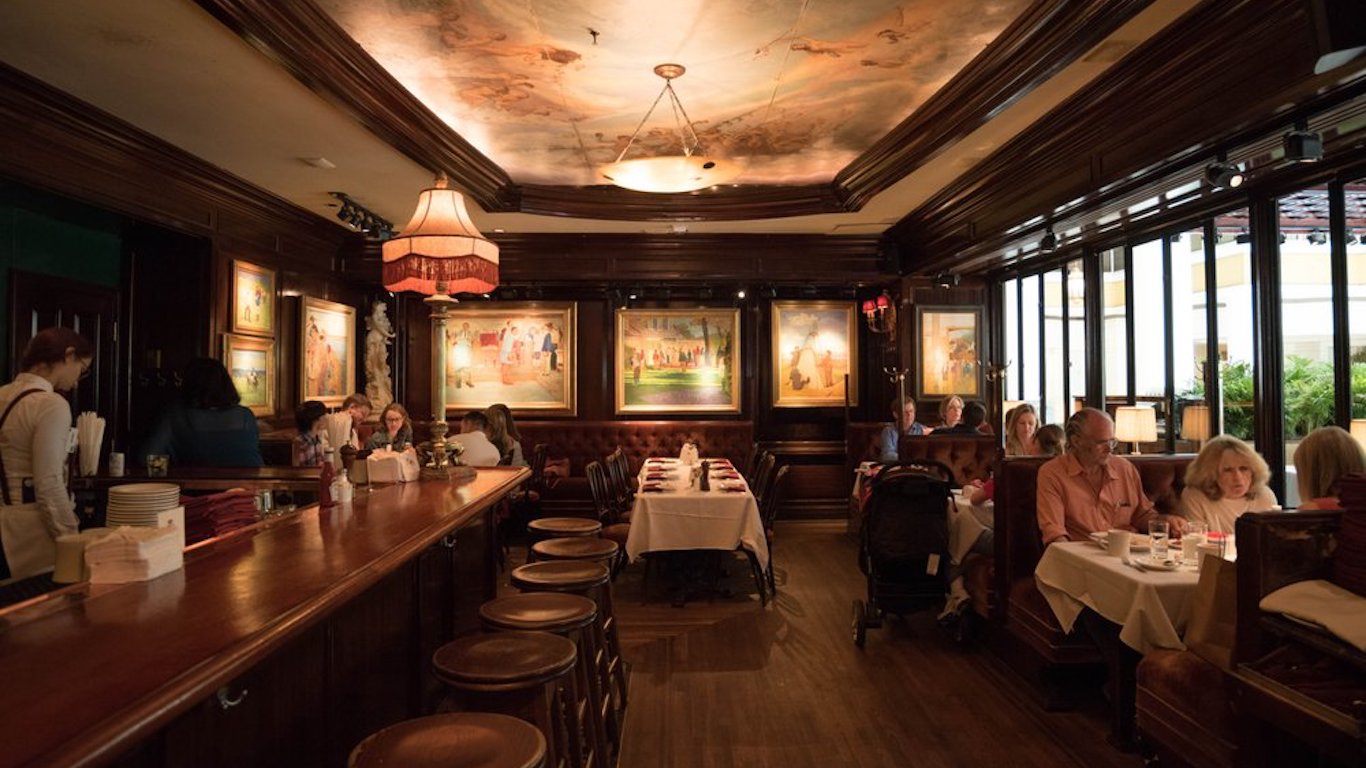 This historic Washington establishment was founded as a boarding house in 1856. It evolved into a saloon and then an eating place, occupying numerous locations over the decades. The owners of Georgetown restaurant Clyde’s bought it at a federal tax auction in 1970 — this was the beginning of what is today the Clyde’s Restaurant Group (see No. 16) — and it moved a final time in 1983.

The clubby dining room, with its Old Bar behind carved glass panels, serves mostly all-American fare with an occasional Southern accent, including fried green tomatoes, oyster gumbo, cornmeal-crusted fried catfish, along with a couple of steaks, a few pastas, and a choice of sandwiches and burgers. 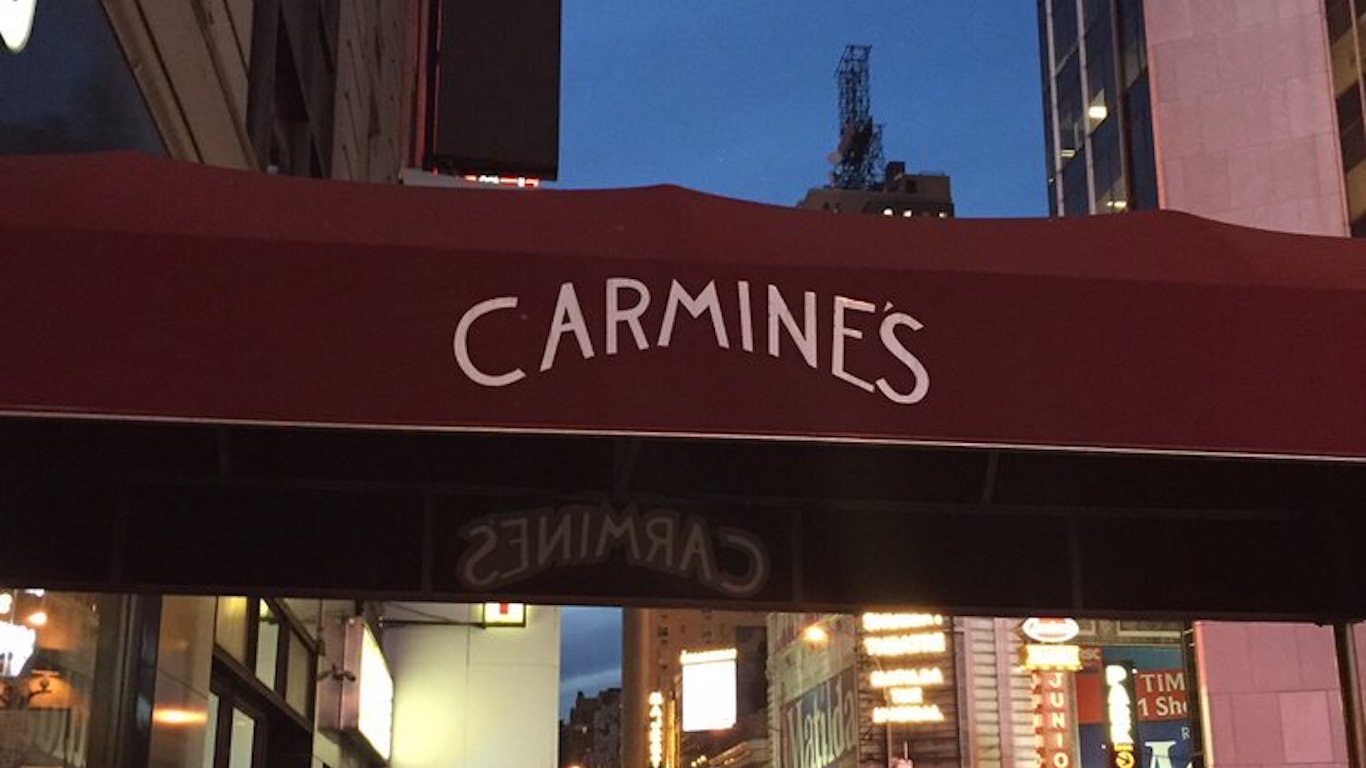 A 1990 uptown evocation of an old-school New York Italian-American family restaurant, Carmine’s — which subsequently spawned branches in Times Square and in Atlantic City, Las Vegas, Washington, D.C., and the Bahamas — is famous for its gargantuan family-style portions and generously poured cocktails.

All the crowd-pleasers are here: stuffed mushrooms, fried zucchini, hot or cold antipasto plates, roasted peppers with anchovies, pasta with white or red clam sauce, manicotti, penne alla vodka, chicken scarpiello, veal parmigiana, shrimp scampi, tiramisù, and on and on. A special allergy menu caters to those with dairy and egg, wheat/gluten, and garlic allergies as well as to vegetarians and vegans. 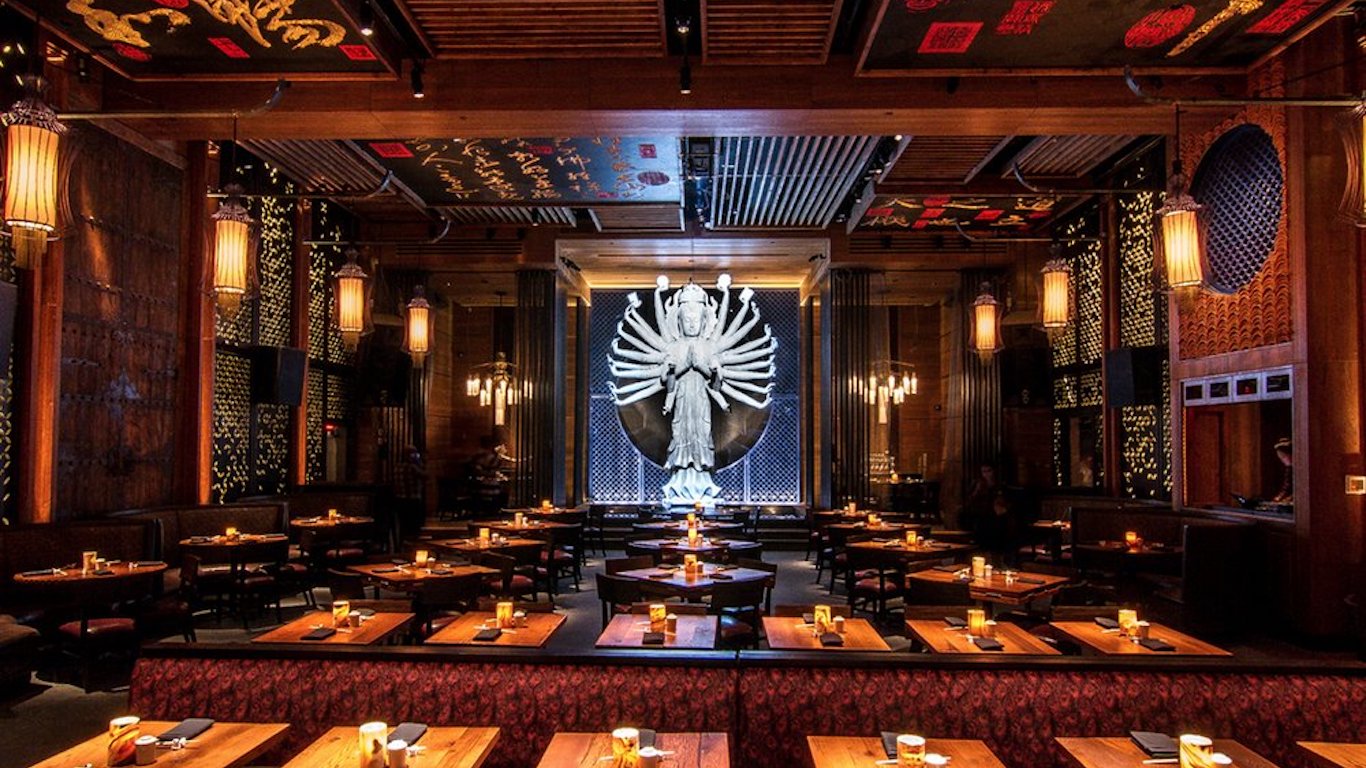 The dramatic decor in this downtown sibling of Tao Uptown (see No. 14) includes a gigantic reclining Buddha, a 24-armed standing Quan Yin Buddha, 3D animated projections of flowing waterfalls and growing moss, and mixed-media murals by British urban artist HUSH. The restaurant’s website says that the place “is intended to look and feel as if it has been there for decades and only unearthed recently …”

The pan-Asian menu includes dim sum, yakitori, tempura, a number of noodle and rice selections, sushi and sashimi, and numerous seafood, poultry, and meat dishes. The majority owner of the Tao group is now the Madison Square Garden Co., which owns sports teams and various entertainment venues around the country in addition to its iconic namesake. 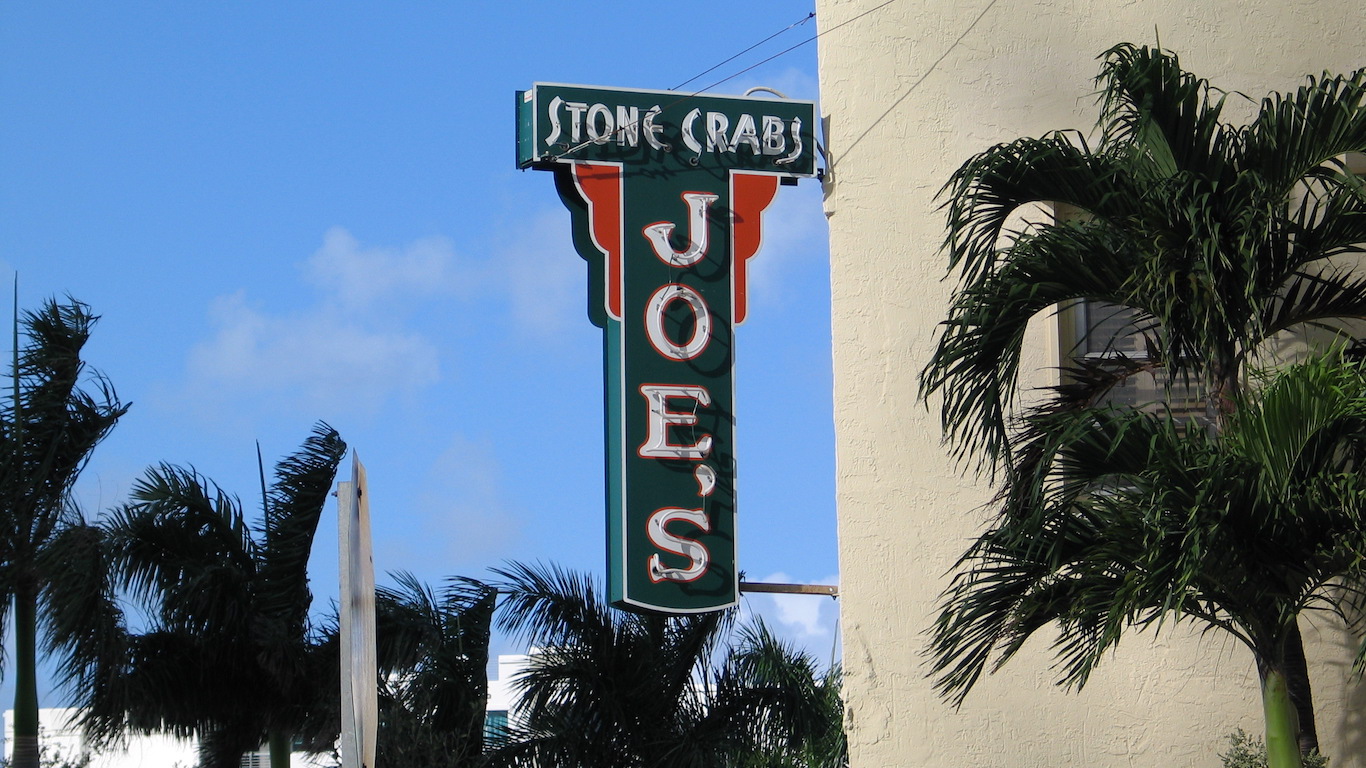 Joe’s founder Joe Weiss “discovered” stone crabs. He and his wife had opened a lunch stand in Miami Beach in 1913. In 1921, a visiting ichthyologist from Harvard brought him a sack of these crustaceans. At first, Joe thought nobody would eat them, but he tried boiling and then chilling them, and they were a hit. In 2000, Chicago’s Let Us Entertain You restaurant group went into partnership with Weiss’s descendents to open a hybrid called Joe’s Seafood, Prime Steak & Stone Crab (see No. 20 and No. 17), but the original remains a one-of-a-kind operation.

Besides the signature claws — fresh stone crabs are in season from October 15 to May 15 — the large menu offers plenty of other seafood, including oysters, snapper and shrimp ceviche, crab cannelloni, potato-crusted mahi mahi, and even skirt steak tacos and steak frites. If you can’t get to Joe’s in person, the restaurant ships “Claws for Celebration” packages, featuring stone crab claws, the house mustard sauce, a cracking board, a mallet, cocktail forks, and bibs. Prices range from $138.95 for medium claws for two to $1,251.95 for jumbo claws for 10. 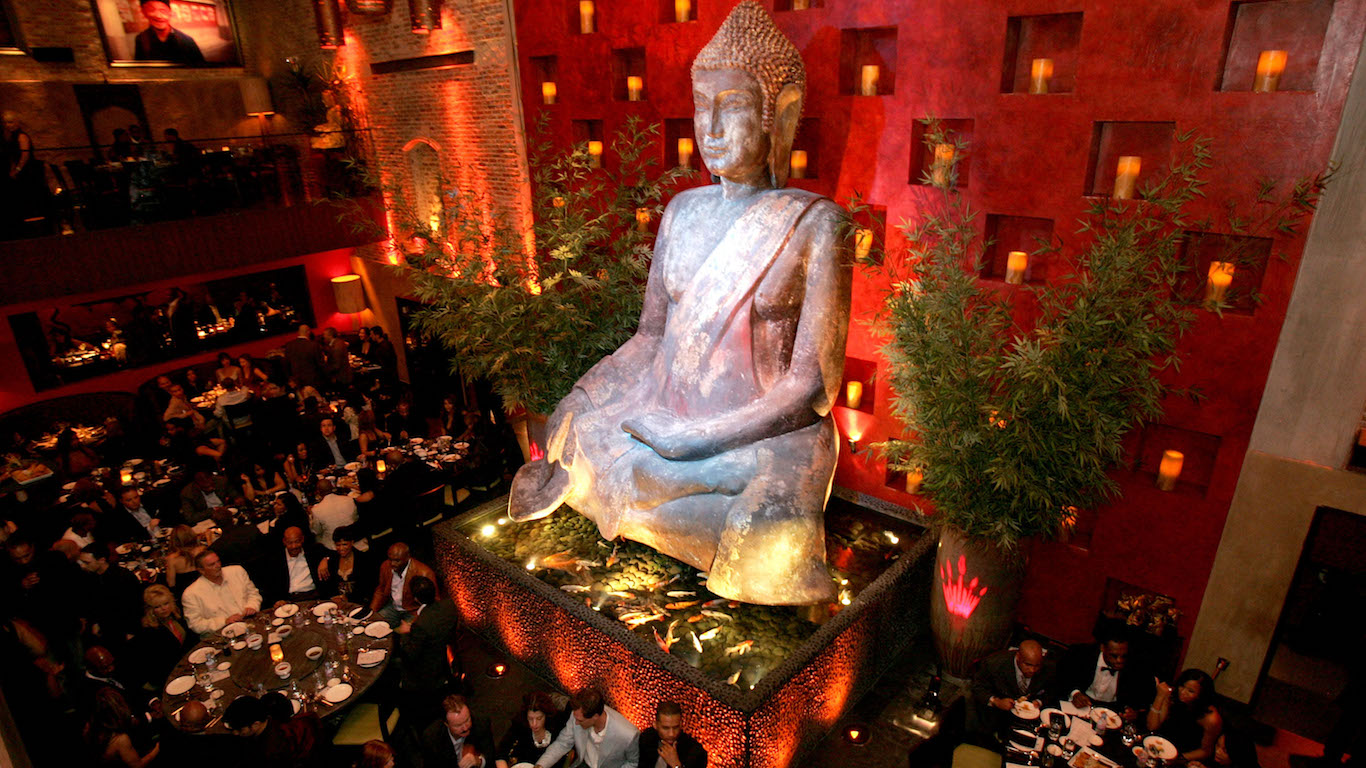 Installed in the Venetian Hotel, Tao Las Vegas encompasses a restaurant — self-described as an “Asian bistro,” but bigger than any bistro should be — a 10,000-square-foot Thursday-through-Saturday nightclub, and a weekend poolside “beach club.” The menu is similar to that at other Taos (see No. 3 and No. 14), with dim sum, sushi and sashimi, rice and noodle dishes, and various entrees.

It’s possible, however, that between its glamorous lounge, its beach club, and its nightclub — where celebrity sightings have included Madonna, Jay Z, Drake, Kim Kardashian, and Jamie Foxx — dinner here is almost beside the point. The Madison Square Garden Co., which bought a majority stake in the Tao Group in 2017, owns various entertainment venues in addition to sports teams and the Garden itself.