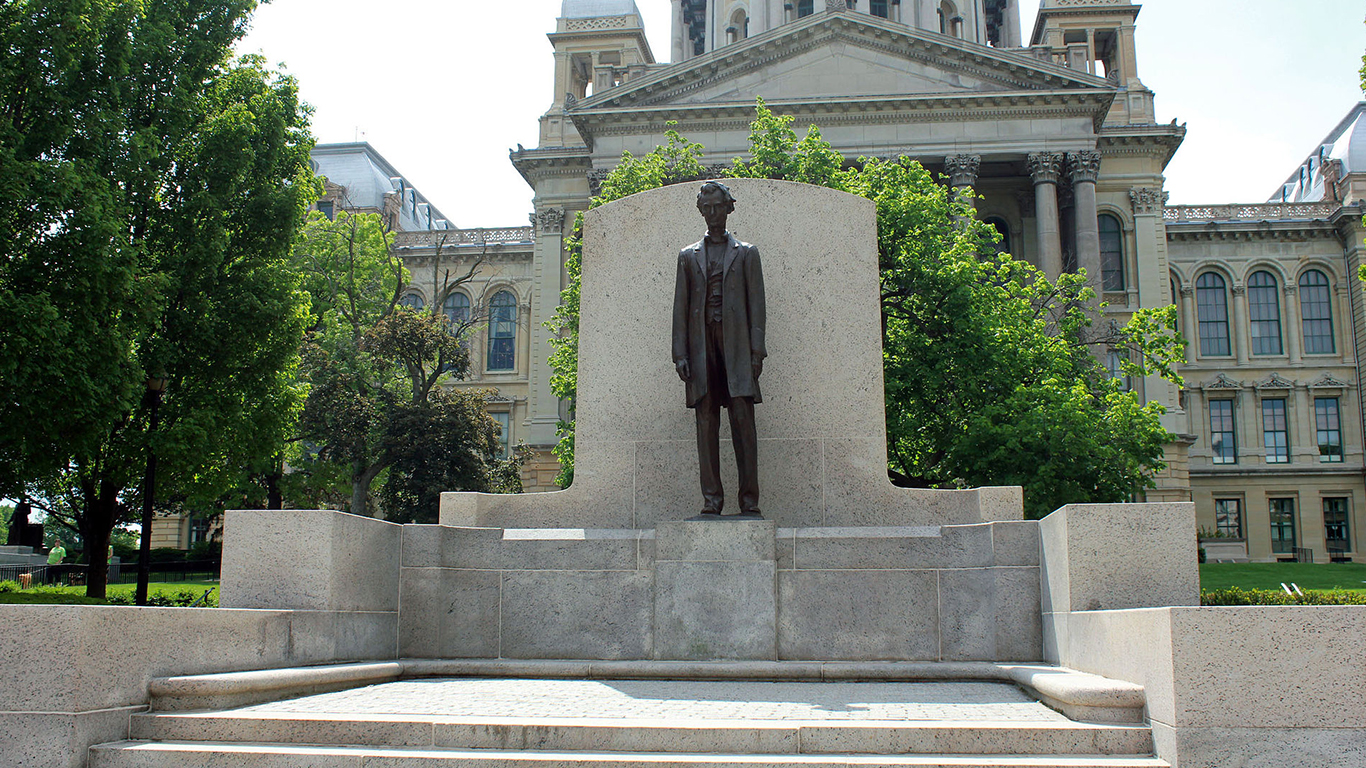 Like all the newspapers on this list, the State Journal-Register has a complicated parentage. It began with Springfield editor Simeon Francis, a great friend and longtime supporter of Abraham Lincoln, who founded the pro-Whig Sangamo Journal in 1831 (the county is Sangamon, but the paper spelled it without the “n”). Though Lincoln was to become the first Republican president, he served four terms as an Illinois legislator and one as a U.S. congressman as a member of the Whig Party, and he wrote frequently for the Journal — usually under a pseudonym — and supported it in the community. In 1855, however, when Lincoln, already an influential politician, declined to help Francis stave off a new competitor, Francis sold the Journal and left town.

In 1836, a Delaware-born printer and journalist named William Walters had started a Democratic-leaning newspaper, the Illinois State Register and Vandalia Republican, in Vandalia (then the state capital), about 60 miles southeast of Springfield. When the capital was moved to Springfield in 1839, the Register followed. Walters ran the paper until 1846, when he was enlisted to fight in the Mexican-American War but died en route to the hostilities.

The Journal and the Register both changed hands several times in the ensuing decades, and in 1928, the Journal was bought by Illinois native Ira Clifton Copley as part of his growing chain of small-town newspapers. In 1942, the Register was added to Copley’s portfolio. The papers merged into the State Journal-Register in 1974, and since 2007, the publication has been owned by GateHouse Media, which publishes 145 daily newspapers and 340 community publications in 37 states. 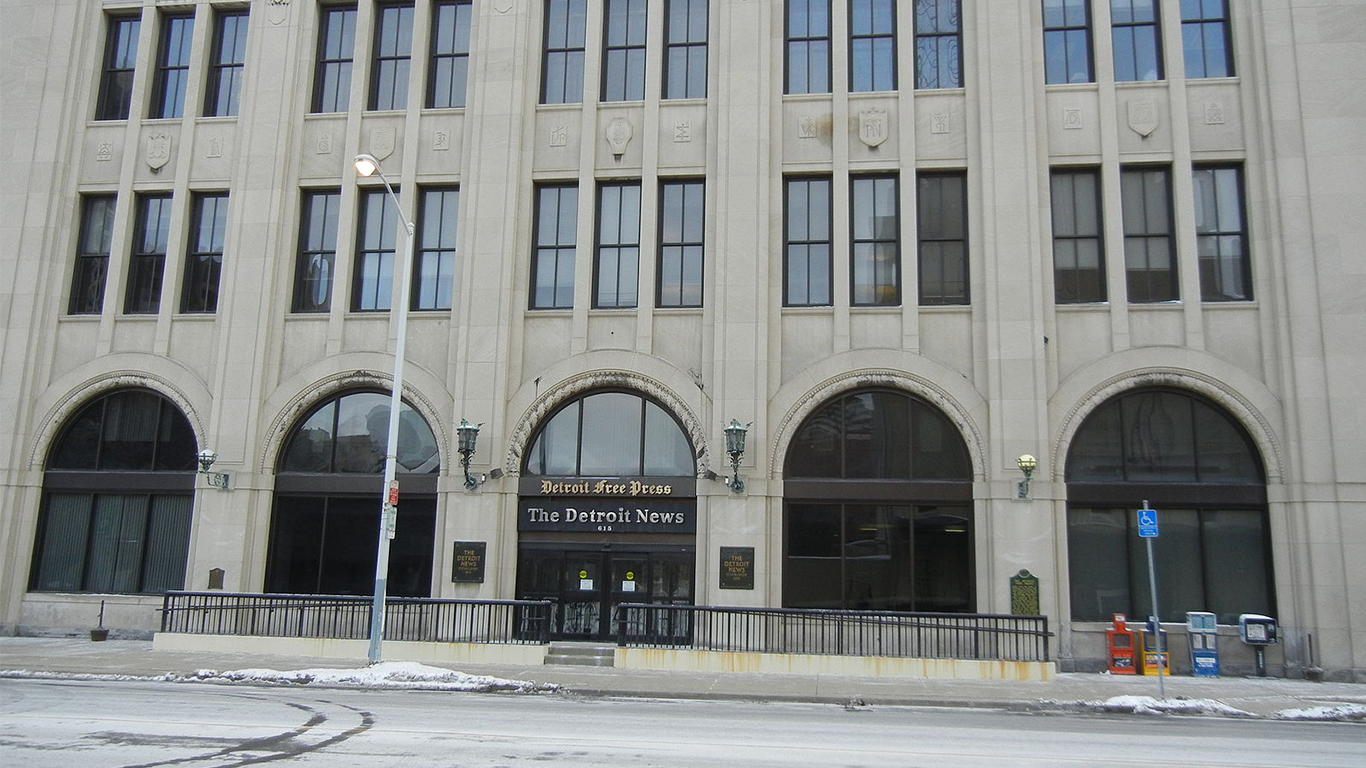 In 1831, a 21-year-old fledgling publisher named Sheldon McKnight, with backing from his family and from Detroit’s first mayor, John R. Williams, published the first issue of a four-page weekly he dubbed the Democratic Free Press and Michigan Intelligencer. Four years later, the paper became a daily, and the name was changed to the Detroit Daily Free Press. The “Daily” was later dropped.

An anti-Civil War Vermonter, Wilbur F. Storey, moved to Detroit in 1853 and bought an interest in the paper, eventually becoming its editor and sole proprietor. He was an innovative publisher, introducing the first regular Sunday edition in the country, sending correspondents to cover the Civil War by telegraph, and publishing a London edition — the first American newspaper to appear in Europe.

The paper was bought by John Knight, founder of Knight Newspapers, in 1940. When Knight merged with another media company, Ridder Publications, to form Knight Ridder in 1974, the Free Press remained under the company’s ownership. The McClatchy Company, which in 2006 purchased Knight Ridder, is now the Free Press’s corporate parent. 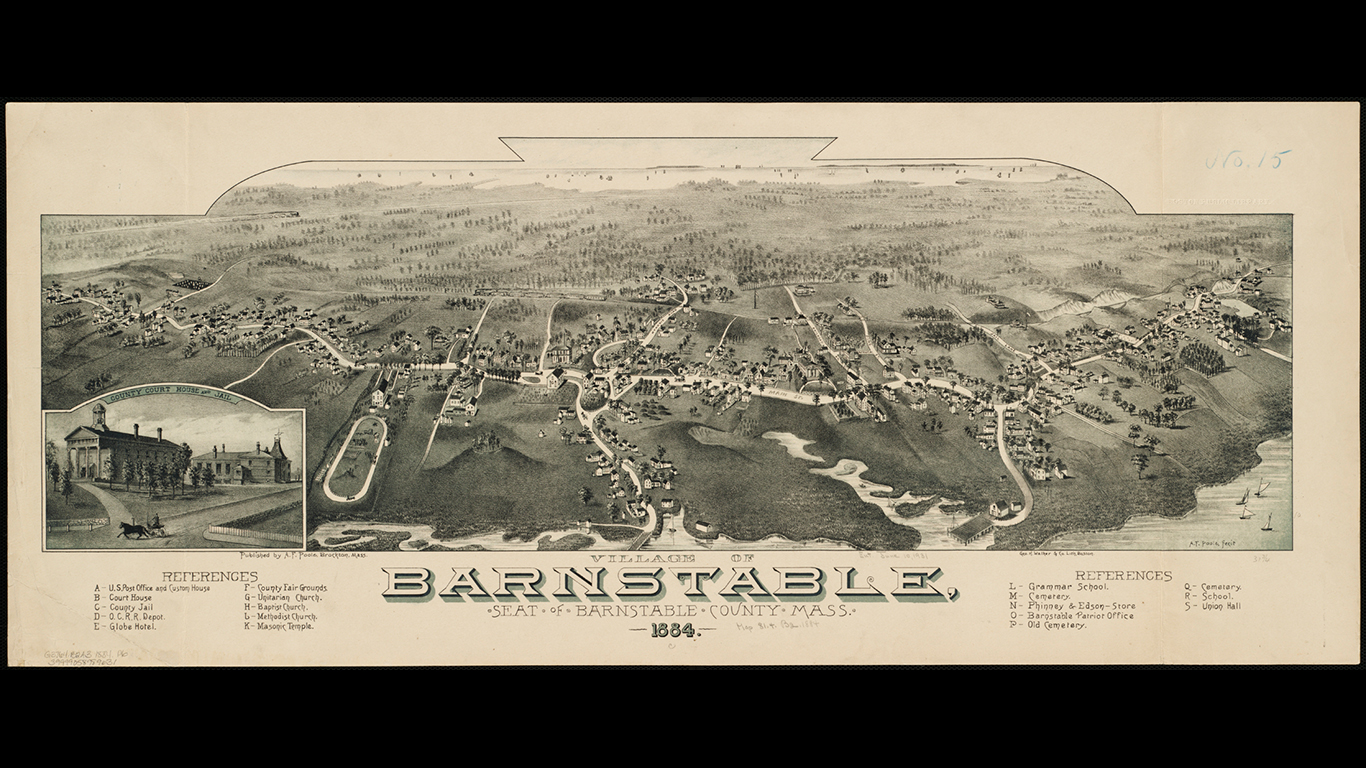 The Patriot was founded in the Cape Cod town of Barnstable by 22-year-old Sylvanus Bourne Phinney. Phiney was the scion of a distinguished local family (his father descended from a Mayflower Pilgrim; his mother from the last governor of the Plymouth Colony) who himself went on to serve as Collector of the Barnstable Customs House under four presidents. Phinney published his first issue on June 26, 1830, with the note to the readers that “Should sufficient encouragement be offered, the second number will be issued about the 10th of July.” It must have been, because the paper survives to this day.

When Phinney was ready to retire, he gave editorship of the paper over to his friend George Sewall Boutwell, who had been a governor of Massachusetts, a senator, a member of the House of Representatives, and the first Commissioner of Internal Revenue (the forebear of the Internal Revenue Service). The Patriot was sold again in 1869 and twice more in the early 20th century. When it celebrated its centennial in 1930, President Herbert Hoover sent a letter of congratulations. Today, after two more ownership changes, the weekly Patriot belongs to massive GateHouse Media, which publishes 145 daily newspapers and 340 community publications in 37 states. 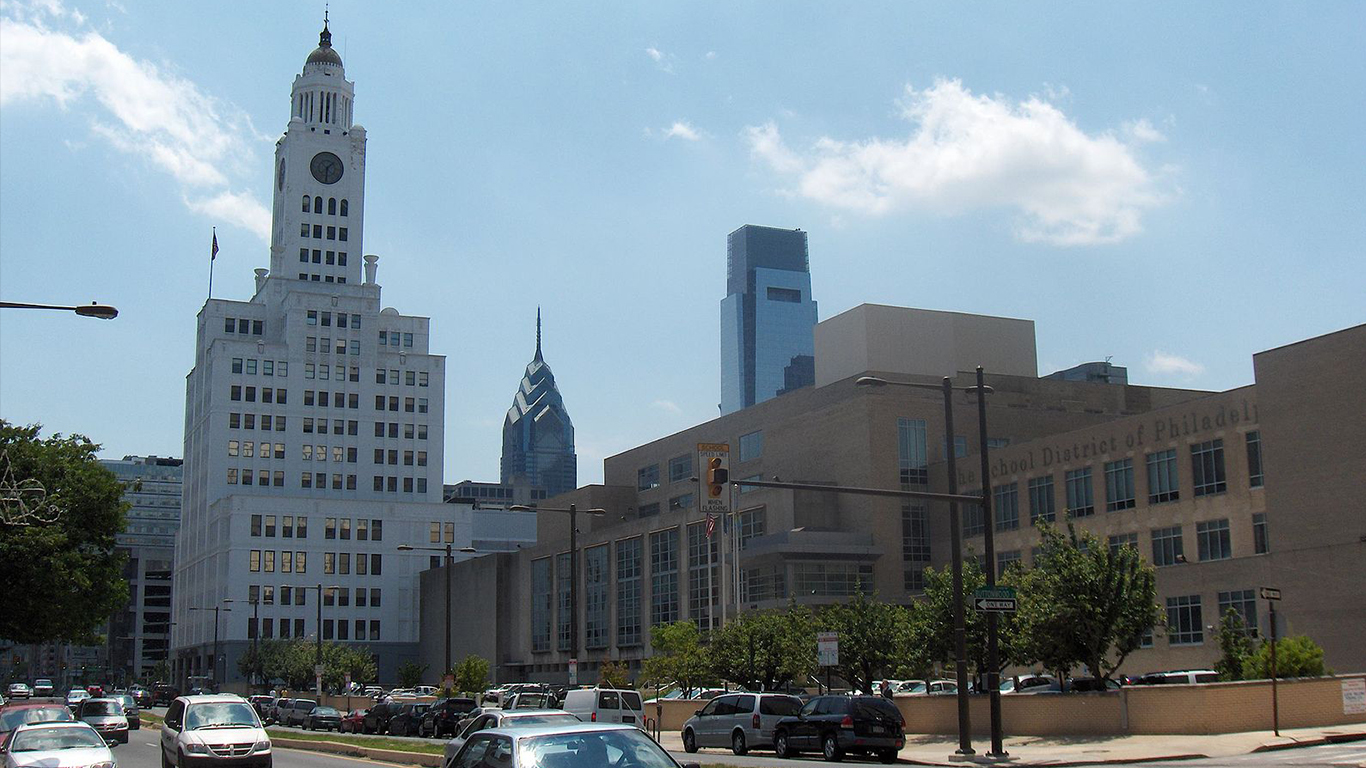 In 1829, Philadelphian John Norvell, who had edited the city’s Daily Aurora & Franklin gazette, launched a newspaper in the city called the Pennsylvania Inquirer, in partnership with a young printer named John R. Walker. A note in the first issue proclaimed that the Inquirer would be dedicated to the “maintenance of rights and liberties of the people, equally against the abuses as the usurpation of power.”

Unfortunately, the paper was not a success, and the founders sold it after only a few months to Jesper Harding. Harding, who subsequently became the largest publisher of Bibles in America, gave the paper over to his son, William, in 1859, and the following year William changed its name to the Philadelphia Inquirer.

The Inquirer came to national attention for its coverage of the Civil War, but following the end of that conflict, Harding sold it to English-born James Elverson, Sr., publisher of a magazine called Philadelphia Saturday Night. In 1936, it ended up in the hands of Moses Annenberg, who already owned the Miami Tribune and the Daily Racing Form. His son, Walter, took over in 1942, becoming a well-known Philadelphia philanthropist and cultural leader. (Today there are journalism and communication schools named for Annenberg at USC and the University of Pennsylvania.)

Knight Newspapers, Inc. (later Knight Ridder Inc.) bought the Inquirer in 1969. Today, after several other owners, the paper has the unique distinction of being run by a public benefit corporation belonging to a nonprofit journalism institute that is in turn controlled by the Philadelphia Foundation, whose stated mission is “to improve the quality of life in the greater Philadelphia region.” 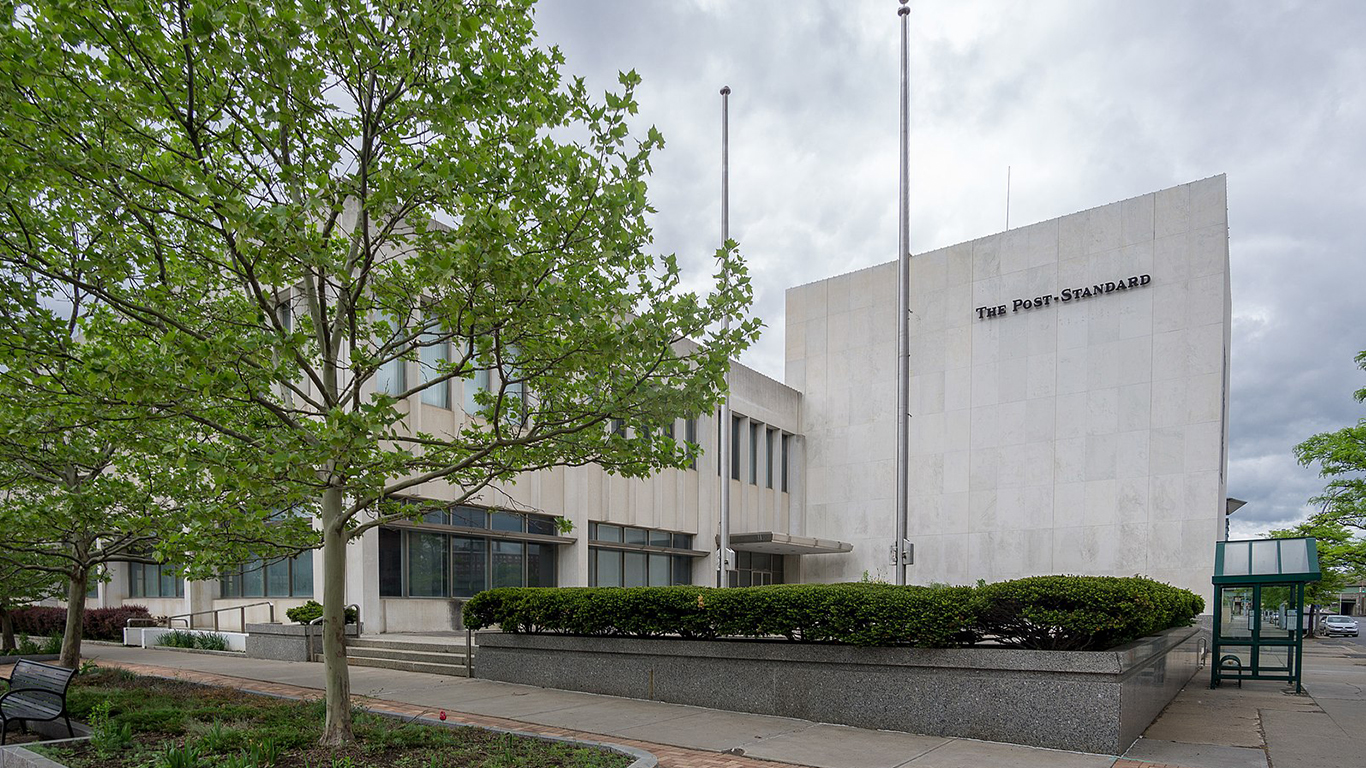 The first issue of the weekly Onondaga Standard was published in Syracuse — the county seat of New York’s Onondaga County — in 1829. Out of this paper grew the daily Syracuse Standard, first published in 1883. In 1894, Frank W. Palmer, a Chicago newspaper editor who had also served as that city’s postmaster, as the Public Printer of the United States, and as a congressman from Iowa, launched a rival newspaper called the Syracuse Post. The Post and the Standard competed for readership — both were morning papers — and in 1899, the two agreed to merge.

In 1906, the Post-Standard hired a Syracuse high school student named Jerome D. Barnum to cover school news. He left to go to college for a year, then returned and took a job in the paper’s business department, working his way up until he was named publisher of the Post-Standard and treasurer of the corporation that owned it in 1916. He held the posts until 1942, when the paper was sold to S.I. Newhouse, later celebrated as the head of the Condé Nast magazine empire.

In 2012, the Newhouse family’s Advance Publications Inc. combined the Post-Standard with the Syracuse.com website to form the Syracuse Media Group. The group announced that the physical newspaper would now be published for home delivery only three days a week, with smaller editions available for single-copy sales the other four.