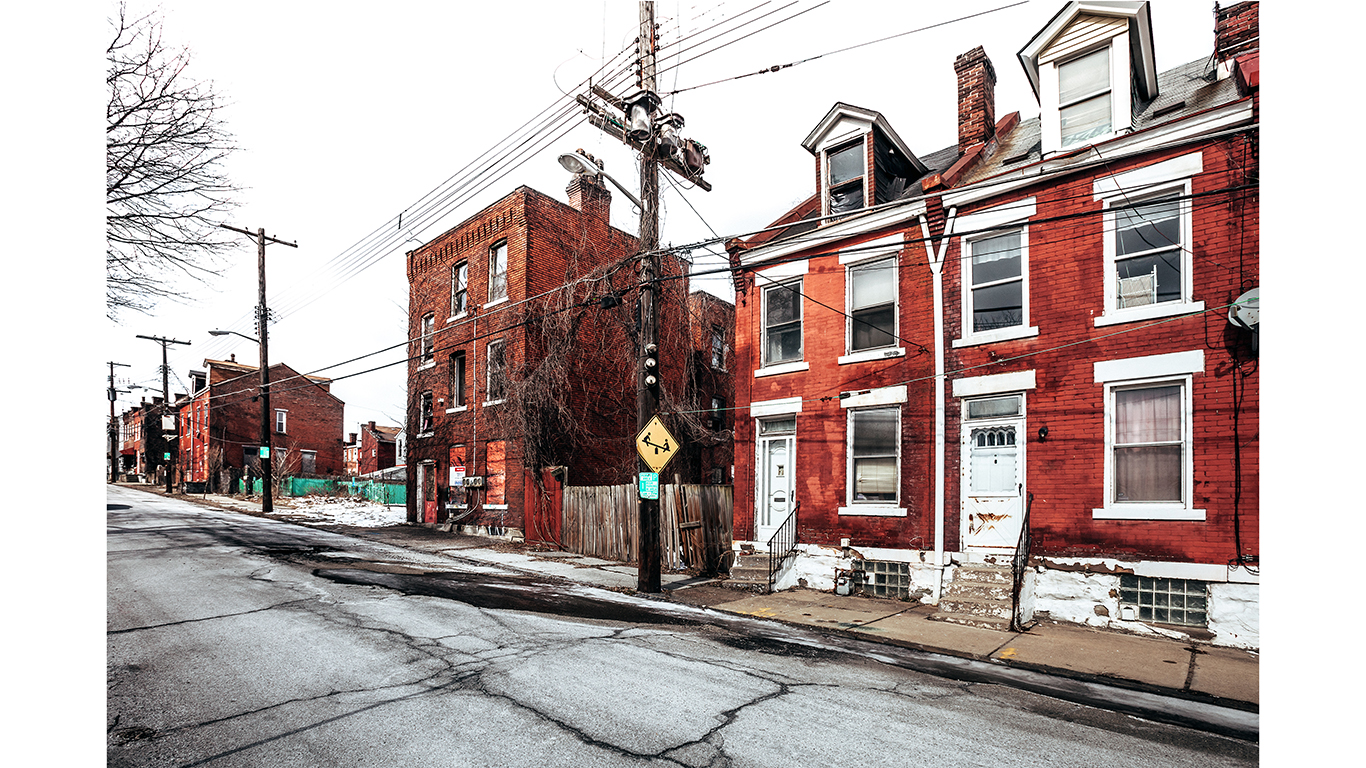 Nearly 677,000 residents called Pittsburgh home in 1950; it was the 12th most populous U.S. city at the time. As of 2018, the city’s population had fallen to just over 300,000, ranking 66th among U.S. cities. Like most American cities with declining populations, Pittsburgh’s decline can be traced largely to the decline of American production and manufacturing that began to take hold in the 1970s and continues to affect the region today.

The city’s economic decline occurred across many industries, but the death of its once mighty steel industry was at the heart of the economic decline and population loss in Steel City. In the 1970s and 1980s, Pittsburgh’s biggest steel employer laid off tens of thousands of workers. From 1970 to 1990, the city lost over 150,000 residents. Today, the level of financial distress in the city reflects in part the economic consequences of a shrinking population. Approximately 22% of people live in poverty in Pittsburgh, and nearly 12% of households earn extremely low incomes (less than $10,000 annually) — each percentage is well above the corresponding national rate. 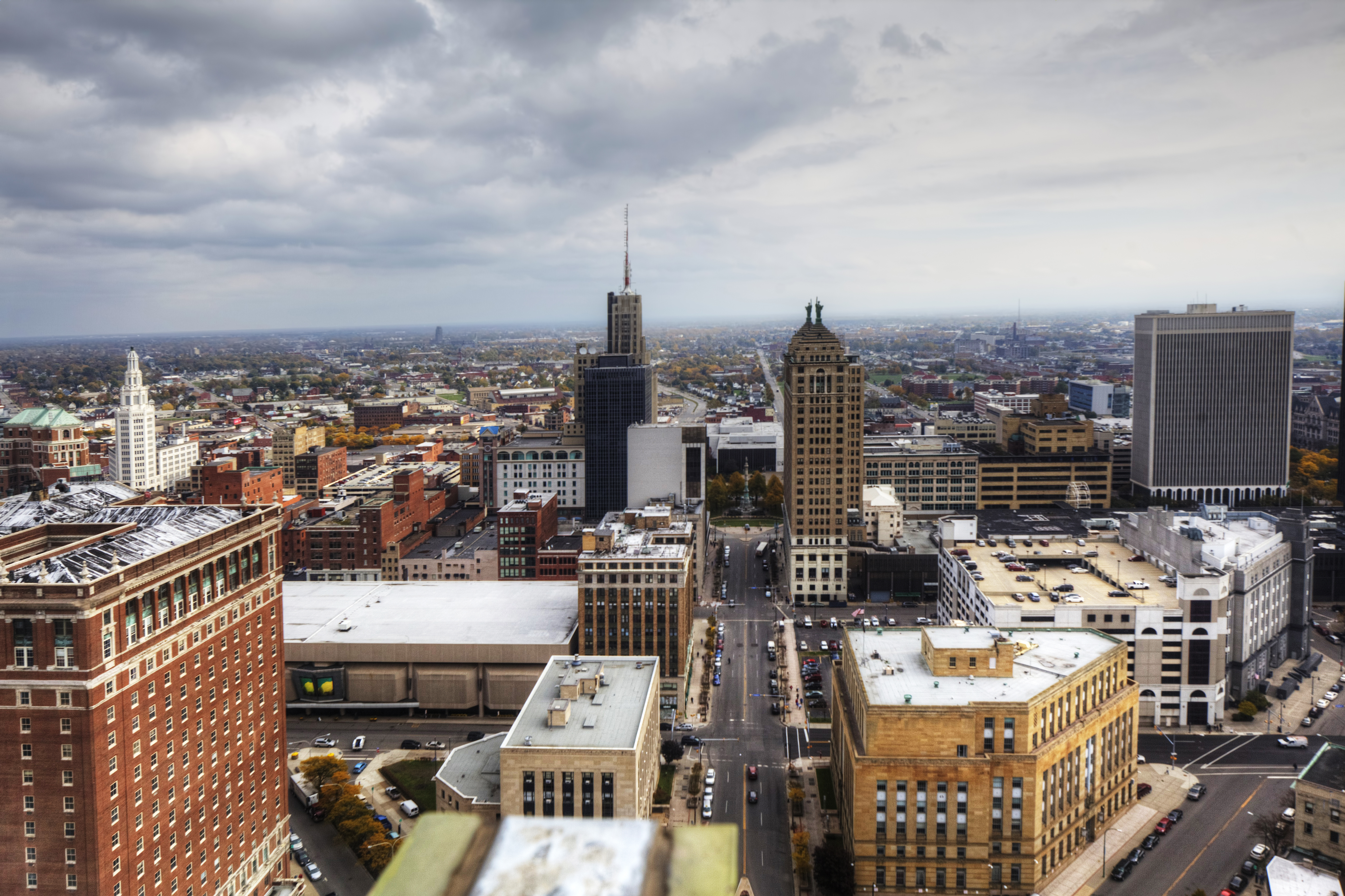 The decline of many of the nation’s legacy cities can be traced to a severe but relatively gradual evaporation of an important industry, and this is also the case in Buffalo — but to an extent. The city suffered as a result of developments in transportation, which resulted in the city losing its standing as a trade route hub. Buffalo was as a major metropolis by the early 20th century due to its location at the top of the Erie Canal, which served as a hub for trade moving from the east to the west via the canal. As roadways and the interstate systems were developed, trucking became a more optimal means of shipping across the country, and barge transportation on the canal dried up. This played a key role in catalyzing the loss of over half of the city’s population as the city’s rank declined from the nation’s 15th most populous city in 1950 to the 83rd most populous today.

The city, though, may be staging a comeback, as young workers have moved to the city. However, the city still has a 30.9% poverty rate, and nearly 35% of households rely on SNAP benefits, more than double the 12.6% share of households nationwide. 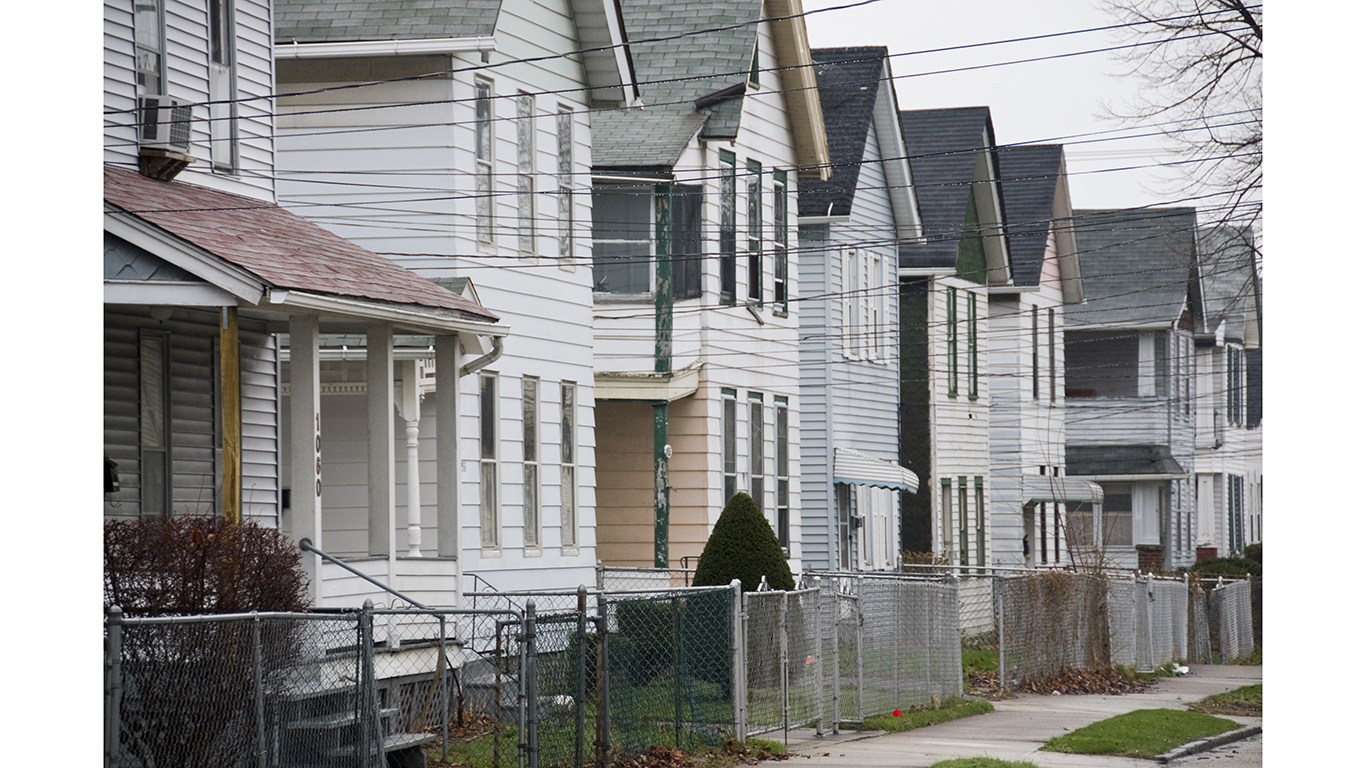 Of the 64 large U.S. cities with 300,000 people or more, only five — including Cleveland — have a population that is now smaller than even just five years ago. Since 2012, Cleveland’s population declined by 2.3%, even as the U.S. population grew by 3.8% over the same period. The out-migration began long ago, however, since 1950, the decade in which Cleveland’s population peaked at 914,808.

Demographic shifts like out-migration tend to exacerbate adverse socioeconomic conditions, which themselves often accelerate population decline. Like other cities with shrinking populations, Cleveland’s violent crime rate of 1,557 incidents for every 100,000 people is among the highest in the country. The rate is five times higher than it is statewide. Ohio’s violent crime rate is 298 incidents per 100,000.

Crime is often concentrated in lower-income areas, and Cleveland is one of the poorest cities in the country. Cleveland’s 35.2% poverty rate is more than double the poverty rates of 14.9% statewide and 14.6% nationwide. 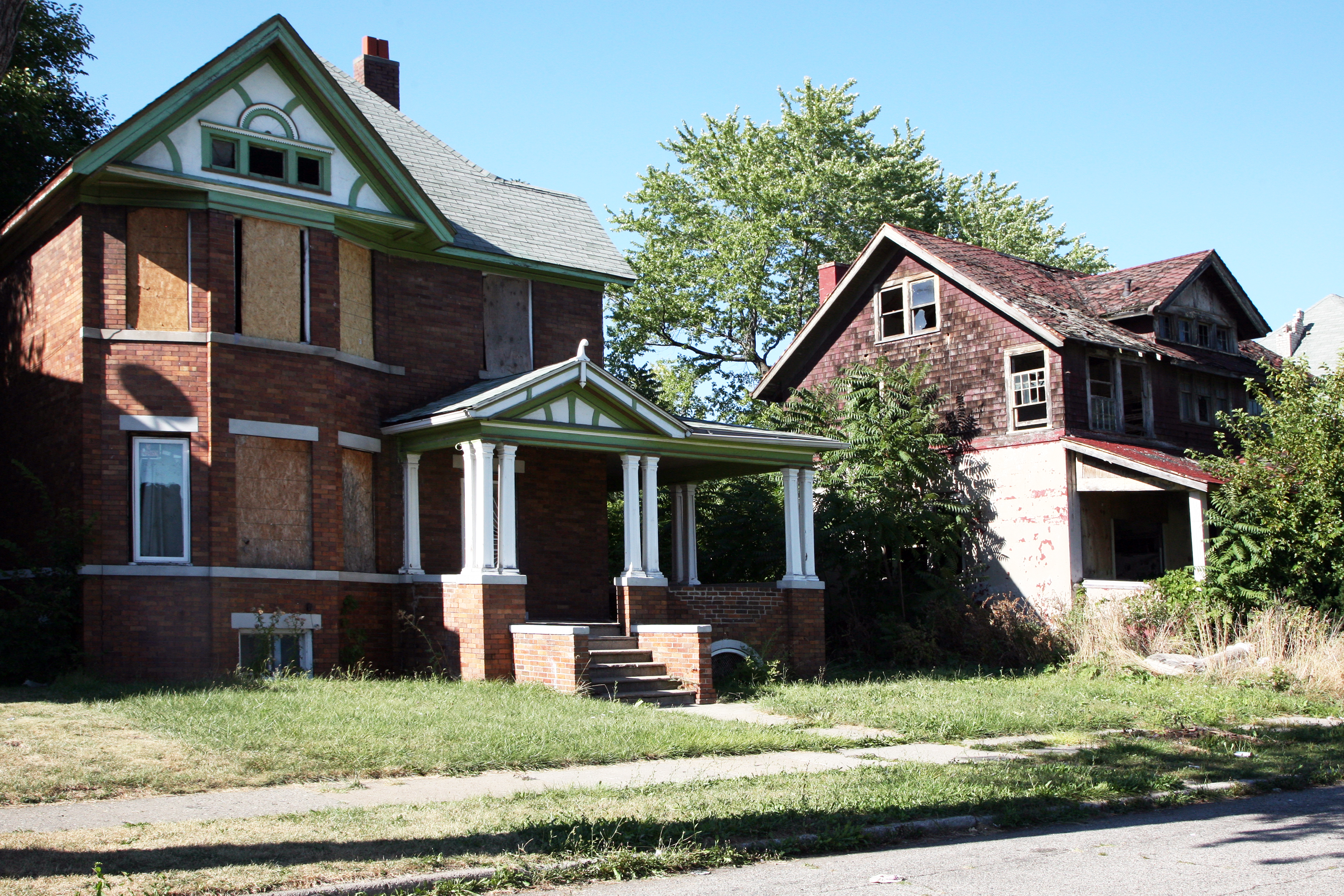 Detroit grew dramatically over the first five decades of the 20th century — from a population of 285,704 in 1900 to 1.85 million in 1950, when it became the fifth largest city in the country. That decade, there were only five U.S. cities with more than 1 million residents. Just as the growth of heavy industry helped Detroit become the prospering automobile manufacturing capital of the world, rapid declines in the sector led to heavy job losses, mass exodus of its population, and the urban decay the city is currently known for. 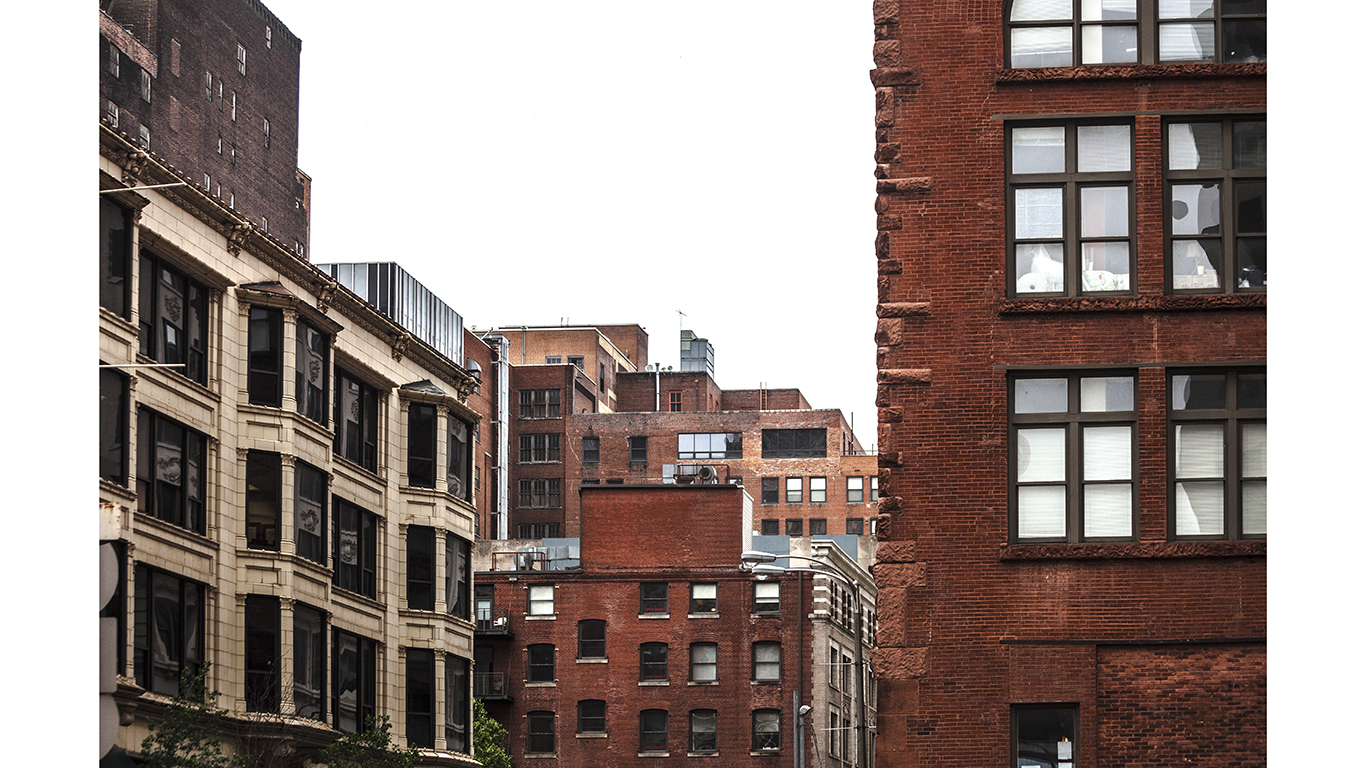 With a population of 856,796, St. Louis was the eighth largest city in the country in 1950. The city’s population has steadily declined since then to just over 300,000 in 2018, ranking as only the 64th largest city in the United States. Like other cities with long-term population declines, adverse socioeconomic conditions are prevalent in parts of St. Louis. East St. Louis, for example, is far and away the most dangerous city in Illinois and one of the most dangerous cities in the United States. Also, one in four people living in St. Louis live in poverty, well above the national poverty rate of 14.6%.

While St. Louis may not be booming, certain aspects of the city do show signs of renewed prosperity. Relatively high immigration from Asia has helped offset some of the out-migration. The city’s sports teams, the Cardinals and the Blues, do very well, which can help support population and economic growth. And, plenty of universities and large companies still operate and thrive in the city.