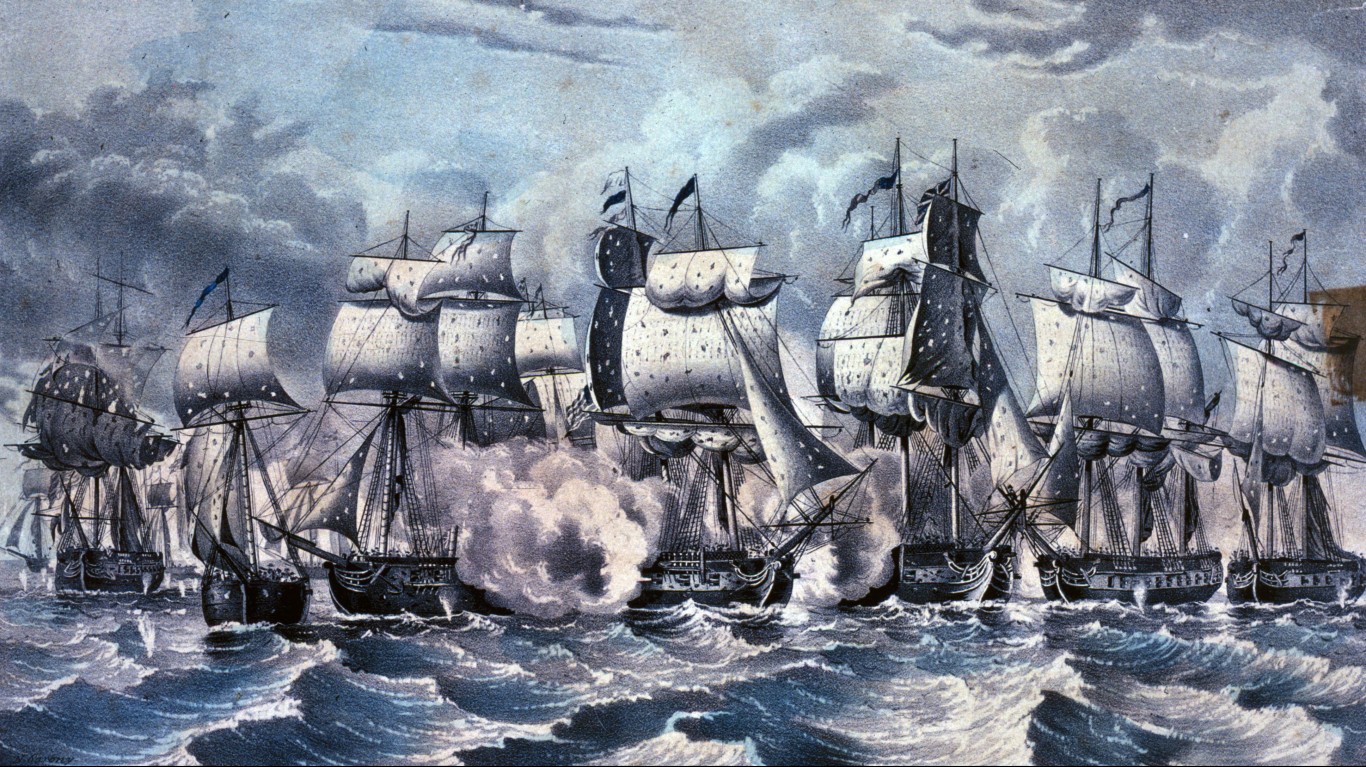 The American Revolution had been over for less than 30 years when the United States and Great Britain fought again. The war was an outgrowth of the conflict between the latter and Napoleon’s France. Both countries had placed trade restrictions on neutral nations, including the U.S., but Americans were further incensed by the practice of impressment, in which the British forcibly removed American seamen off their ships and into the service of Great Britain.

The war did not go well for the United States, which lost most of the battles. America was repulsed in its invasion of Canada, and suffered the indignity of the British burning the newly created capital of Washington, D.C., in 1814. The U.S. military fared better in the west with Commodore Oliver Hazard Perry’s victory at Lake Erie in September 1814, and after the British failed to take Baltimore, Great Britain sought an armistice. Later that year, a peace treaty was signed in Ghent, in what is now Belgium. None of the U.S. goals during the war were achieved, but the nation remained independent. Britain vowed to not change the border with Canada and an attempt to create a Native American state in the Northwest was abandoned. 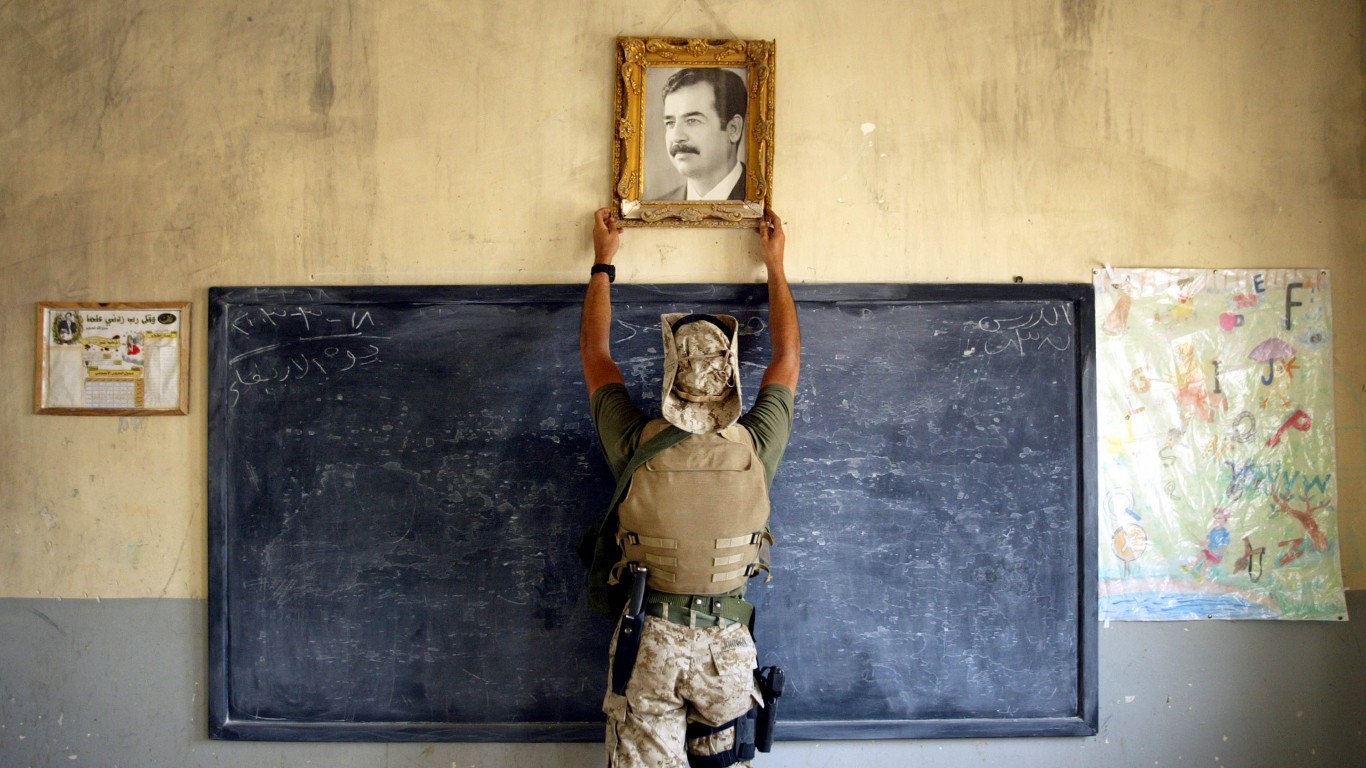 In the first phase, a United States-led coalition invaded Iraq in March 2003, claiming Saddam Hussein had refused to turn over weapons of mass destruction, and ousted the Iraqi government. That phase ended in April, but was quickly followed by an insurgency that endangered the newly formed government. Coalition casualties had been light in the first phase of the war, with just 150 deaths by May 1. But U.S. battle deaths climbed as the insurgency grew, topping 1,000 by the time of the U.S. presidential election in November 2004 and 3,000 by early 2007. A so-called surge of 20,000 U.S. soldiers sent to Iraq later that year led to a decline in the hostilities. The United States pared its military presence in Iraq, and formally withdrew in December 2011.

24/7 Wall St.
50 of the Most Decorated War Heroes in American History 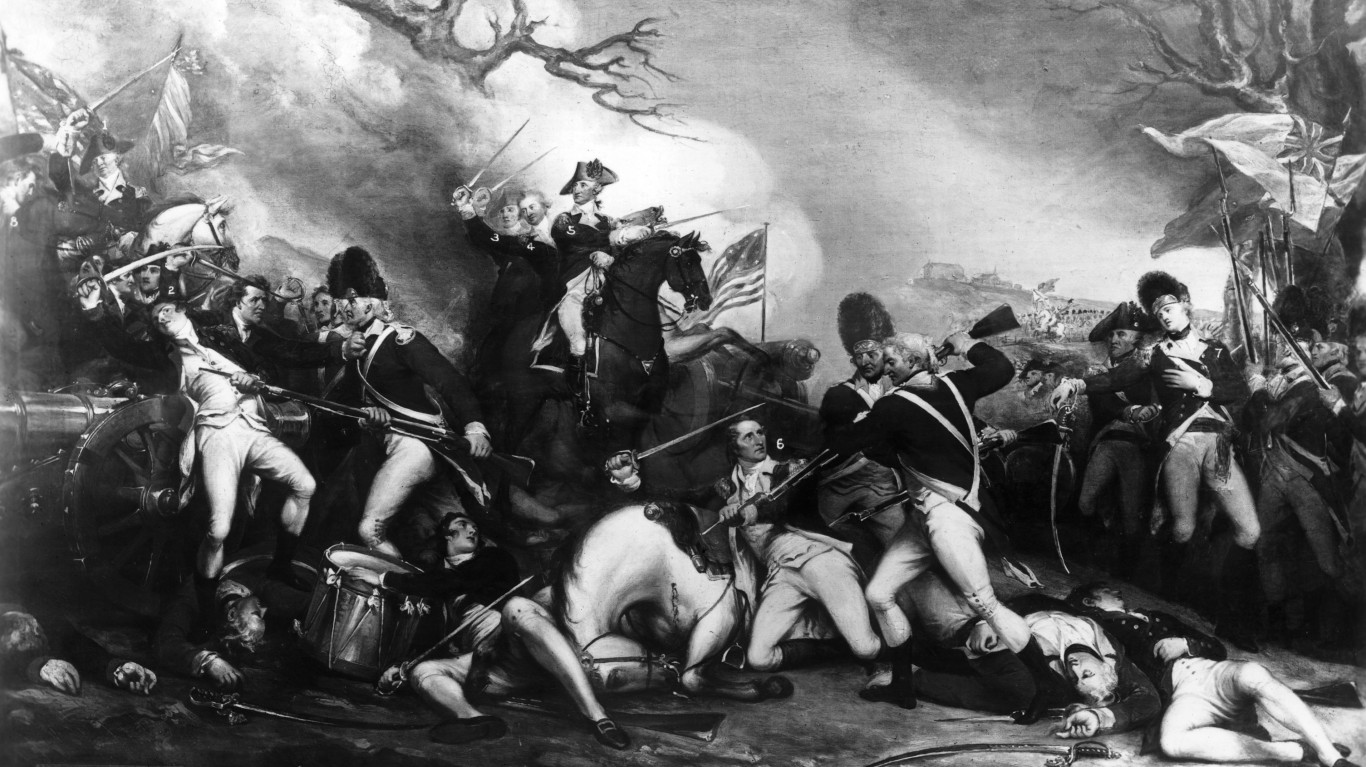 By percentage, the American battle deaths following the War of Independence were among the highest of any war the United States has fought. The total of 4,435 battle deaths were suffered by the new nation of fewer than four million people according to its first census, in 1790. For much of the war, the ragtag army and state militias were defeated in battles in the New England and mid-Atlantic region by professional soldiers from Great Britain and mercenaries from the German states. But aided by accomplished European soldiers such as Polish-Lithuanain military engineer Tadeusz Kościuszko and Casimir Pulaski, a Polish nobleman who trained the cavalry, the Americans and their allies Spain and France turned the tide and defeated the British, ultimately gaining independence. 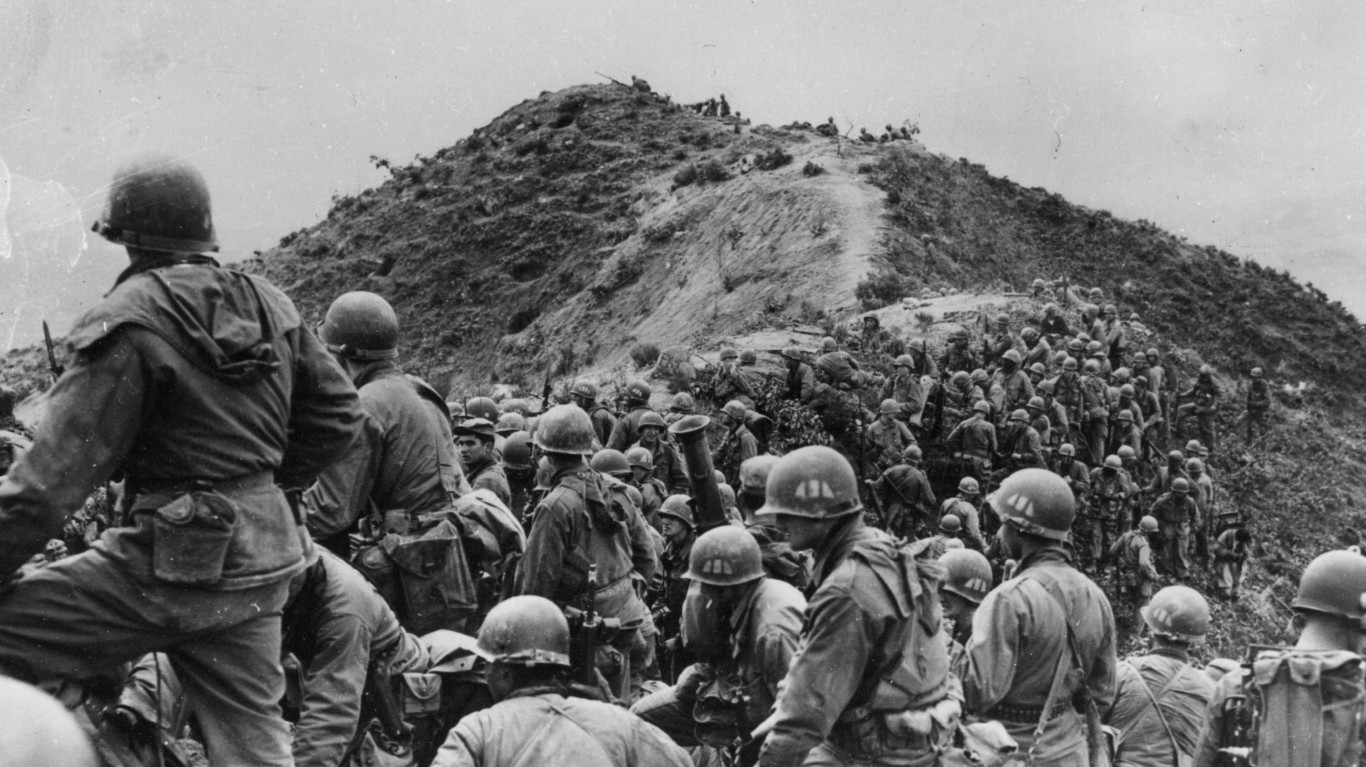 After World War II, the Korean Peninsula was divided between North Korea, supported by the communist-led nations of China and the Soviet Union, and South Korea, backed by the United Nations, the United States, and its allies. The border ran along the 38th parallel and border disputes led to an invasion of the south by North Korea, prompting the start of what is sometimes called the “Forgotten War.” It was the first shooting conflict during the broader ideological struggle between the communist nations and non-communist countries during the Cold War. Under Gen. Douglas MacArthur, the U.S.-led UN troops drove the communist forces to the Yalu River, the Chinese border. At that point, China entered the conflict and threw the UN troops back. The troops from the south fought their way back up the peninsula and the war settled into a stalemate, where it remains today, with the end of the war never having been officially declared. 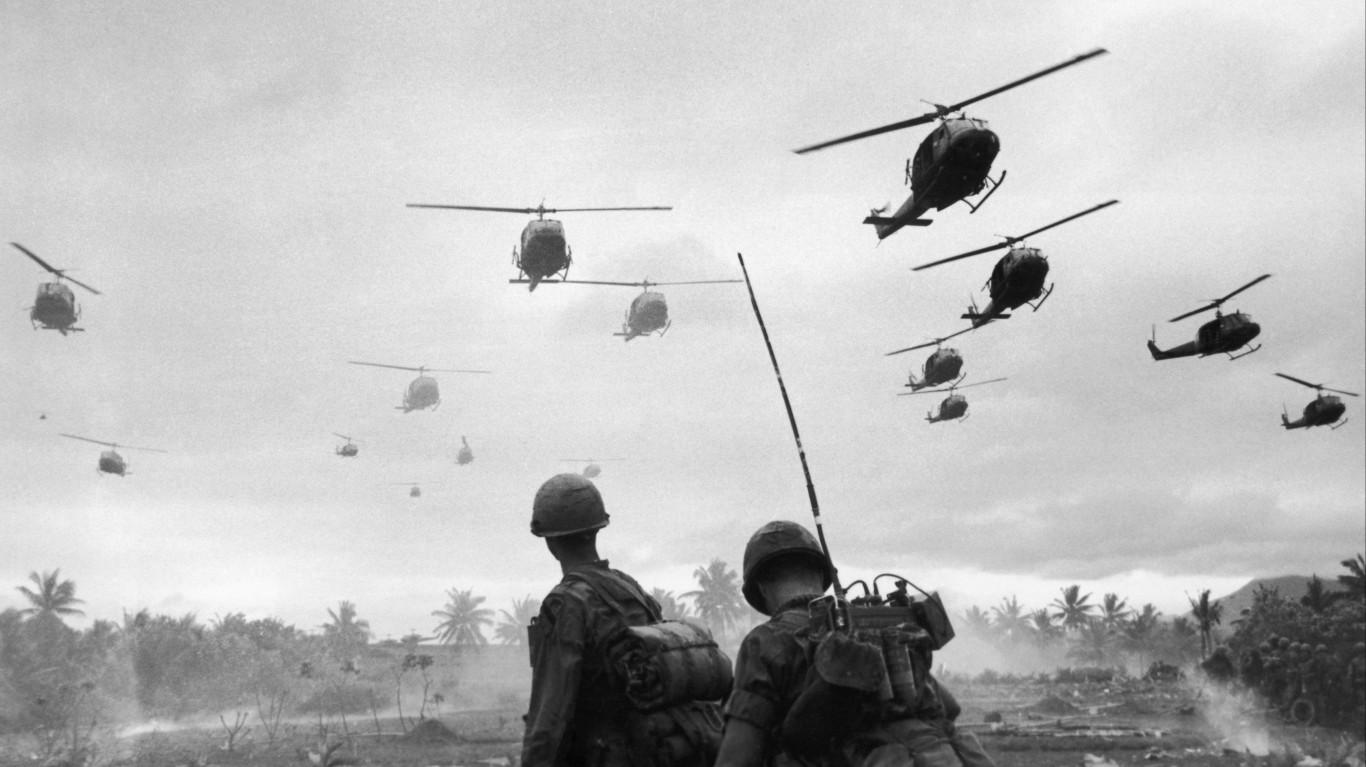 The Vietnam War would become the most divisive conflict in American history.

The roots of the war are in World War II and the French colonial experience in Southeast Asia. Political leader Ho Chi Minh led opposition in the northern part of the country against the occupying forces of Japan and France. After both of those powers were defeated in the country, Vietnam was divided into north and south, with the north backed by the Soviet Union and its allies and the south supported by the U.S.

Though the start of the war is pegged at 1964 – with the escalation of U.S. forces following the Gulf of Tonkin incident involving an attack on a U.S. military vessel – American involvement in the region had been going on for at least a decade earlier.

The war was fought based on the so-called domino theory, holding that if a nation fell to communism it would lead to the downfall of its neighbor. The Vietnam war was a protracted and costly struggle, intensified by growing Cold War tensions between the United States and the Soviet Union. More than three million people were killed, more than half of them being Vietnamese civilians.