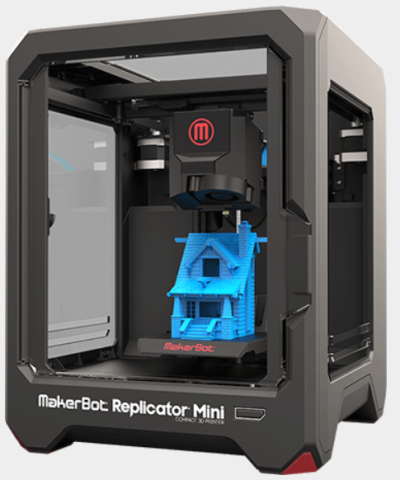 Source: MakerBot
Until now, the realm of 3D printing has been targeted more toward industry and commercial markets. After all, the machines cost thousands of dollars (or more) for large-scale 3D printing production. Now we have the launch of two smaller format 3D printing devices in just the past two days. With prices close to $1,000 for the units, it quite simply means that the target market for 3D printing is YOU!

If you have a need for this sort of machine, the low price points mean that the consumer and small businesses will win. Unfortunately, this will mean ever more intense competition among the 3D printing leaders. It is hard to call anything a price war right at the start of a launch, but this is a development that could easily escalate into a full-blown price war ahead.

3D Systems Corp. (NYSE: DDD) has confirmed that its recently unveiled Cube 3 and CubePro 3D printers will start its commercial shipments in the second half of June 2014. These are now available for preorder. The Cube 3 and CubePro take the consumer 3D printing and desktop engineering experience with multi-color and multi-materials, and what it says is the highest resolution available at 70 micron layers, faster print speeds and printing on the go, directly from a smartphone with the new Cubify mobile app, to be released when the printers ship.

Stratasys Ltd. (NASDAQ: SSYS) just announced on Monday that its MakerBot subsidiary has launched its MakerBot Replicator Mini Compact 3D Printer to target homes, schools, offices and dorm rooms. The Mini allows users to find more than 300,0000 free downloadable digital 3D printable items and is priced at $1,375. And its also expects to ship its other new 3D printer, the MakerBot Replicator Z18 3D Printer, in June.

So, what is there to think here? Having an entry-level price at $1,000 may not sound expensive at all, but of course it does not include materials and any purchases along the way. If prices start at $999 from 3D Systems and $1,375 from Stratasys, imagine where they will be in a few years if 3D printing becomes more mainstream.

Perhaps the biggest question is whether Hewlett-Packard Co. (NYSE: HPQ) will get in the game in time, or whether it will just become part of the implied price wars here. Meg Whitman was very excited to get into 3D printing, but the company then retracted the time frame and has since gone far less vocal about what it sees as the opportunity here. If one company knows how to sell printing to small businesses and consumers, Hewlett-Packard would fit that bill.

As a reminder, price wars — even if they are not declared price wars such as this instance — are great for consumers and businesses who need to be the equipment and services. They are generally not good for the companies in a price war.