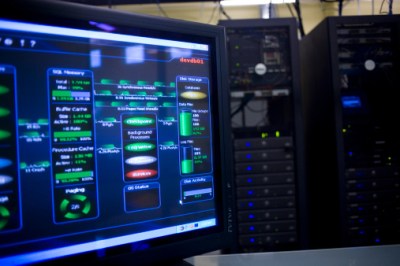 Source: Thinkstock
One good way for inquiring minds on Wall Street to find out what companies plan on spending is to ask them. That is exactly what the analysts and research team at Merrill Lynch did in their Hardware and Software groups. In a new research report, the Merrill Lynch team surveyed more than 190 respondents with a total information technology (IT) budget of more than $4.5 billion. While the growth for the year is only expected to be 1.1%, that is still more than enough to make a big difference at some of the top technology companies.

We highlight the top stocks in the Merrill Lynch report that they feel are benefiting the most from the current spending levels.

Cisco Systems Inc. (NASDAQ: CSCO) is the number one security hardware vendor. Big business has made it abundantly clear that security is a top priority now and going forward. With Fortune 500 companies getting hacked and thousands upon thousands of customers having vital data compromised, this does not look like it will change anytime soon. Investors are paid a solid 3.2% dividend. Cisco is rated a Buy at Merrill Lynch, which has a $28 price target. The Thomson/First call estimate is at $25.01. Cisco closed Thursday at $24.38 a share.

ALSO READ: Should Alcatel-Lucent Really Dump Its Own Cyber-Security Unit?

Citrix Systems Inc. (NASDAQ: CTXS) is neck-and-neck with its biggest competitors for the lead in the desktop virtualization market, with Citrix taking the lead in the last survey 47% and 42% respectively, versus a tie in the second half of last year. The company has found its way onto most of the top recommendation lists on Wall Street. It is rated as a Buy at Merrill Lynch, which has a target price of $78. The consensus target is much lower at $65.39. The stock closed Thursday at $61.42.

FireEye Inc. (NASDAQ: FEYE) was absolutely blasted in the withering tech sell-off for many reasons, including a rich valuation, continued deal making and insider lock-ups expiring. However, security software is a huge need for business and spending could be up 20% this year. Merrill Lynch has a $44 price target on the stock, which is rated Buy. The consensus target is $47.87. FireEye closed Thursday at $32.29.

Microsoft Corp. (NASDAQ: MSFT) is the hands-down leader in both public and private clouds. The company’s Azure product offering came in as the leading vendor of choice with 22% and 26% share, respectively. Investors are paid a 2.8% dividend. Merrill Lynch rates the stock Underperform and has a $35 price target. The consensus target is much more bullish at $41.60 price target. Microsoft closed trading at $40.10.

Oracle Corp. (NYSE: ORCL) is still the leader in database software, with Microsoft coming in a close second. As the competition for security, cloud and database software continues to heat up, it would not be surprising to see some consolidation in the industry. Oracle is a likely candidate to be an acquirer at some point. Investors are paid a 1.1% dividend. Merrill Lynch rates the stock at Buy and has a $46 dollar target. The consensus target is $42.24. Oracle closed Thursday at $41.52.

ALSO READ: Telecom and Networking Stocks to Buy for the Rest of 2014

Salesforce.com Inc. (NYSE: CRM) is rated a Buy at Merrill Lynch. The company is tied with Oracle and SAP for the lead in the SaaS category. The company’s earnings are expected to grow a whopping 30% for the next five years. Short-sellers have been absolutely taken to the woodshed over the years by this stock. The Merrill Lynch price target is $70, while the consensus is at $68.10. The stock closed Thursday at $53.27, up more than 6% on the day.

VMware Inc. (NYSE: VMW) is rated Buy at Merrill Lynch and is in a close race with Citrix Systems for the lead in the desktop virtualization market. However, the company actually gained 11% last year in market share, while Citrix lost 4%. The Merrill Lynch price target is $120 and the consensus is at $110.33. The stock closed at $96.44.

One thing seems likely. With many of these companies seeing sales growth at just 1.1%, think of the revenue if IT spending just doubled that level to 2.2% in 2015. With the second half of the year looking better than the very tepid first two quarters, things could be looking up for these top tech names.