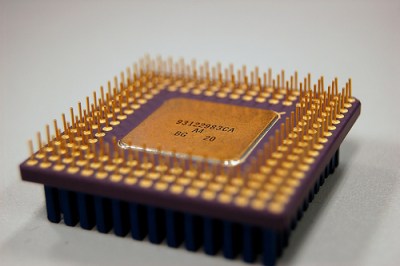 Intel Corp. (NASDAQ: INTC) has reported its third-quarter earnings Tuesday after the market closed. This processor leader and semiconductor giant posted an earnings report for the previous quarter strong enough that it took shares up almost 10% on the reaction alone. It appears that investors may have at least partially gotten what they wished for with a repeat performance in above-estimate numbers. Coming into these earnings, the price of the stock had been hit hard with the market and with Microchip Technology’s revenue warning last week.

What we have seen in 2014 is the world of PCs did not die. It even faced a resurgence in spending after Microsoft stopped supporting Windows XP. This drove new PC spending as newer operating systems at the enterprise level needed more powerful processors and memory.

Wells Fargo should get at least some credit for its call this week. The firm said ahead of earnings that it expected Intel to be among the chip companies the firm expects to meet their September earnings estimates and to meet the December quarter guidance.

We wanted to see if the charts were going to play any part of the move, and if so they aren’t showing that on the longer-term moving averages. The 200-day moving average is still well below the current share price, all the way down at $28.75. In late September the share price crossed under the 50-day moving average, which now reads at $34.20, and the 50-day average had acted as resistance for a week or so prior to the latest selling pressure.

The broad markets closed mixed Tuesday after all being initially up earlier in the day — after three days of very strong selling pressure — Intel’s stock price rose about 2.1% on the day to close at $32.14. Shares were indicated up in the after-hours around 0.5%. However, the initial reaction in the after-hours had shares up over 2%. Shares of Intel have a consensus analyst price target of $34.36 and a 52-week trading range of $23.03 to $35.56.

Is this a great report? Maybe not to the equity traders. Still, the company said it was a record third quarter in revenues. Guidance isn’t looking to shabby either. After the scare that Microchip Technology put in semiconductors last week, this report should be one of relief.

ALSO READ: 5 Top Chip Stocks That Could Surge in the Fourth Quarter