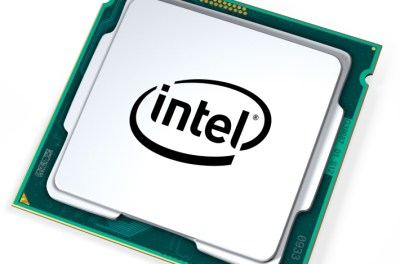 Source: courtesy of Intel Corp.
Despite an almost 30% move in the SOX index this year, which tracks the semiconductor industry, the analysts at Merrill Lynch are advising clients that they should stay long the chip stocks as we move into 2015. They make the case that the old highly cyclical model of the chips is starting to die, and they also submit that chip demand is now more seasonal than cyclical. In a new report they lay out the case for more gains for the sector.

The Merrill Lynch analysts point to a comment by Texas Instruments CEO Rich Templeton, in which he basically said that since we haven’t experienced a super-strong economy, and haven’t seen an over-inflated chip market, there is really no reason we should expect a big chip market crash. With all the industry’s metrics pretty well balanced, 2015 could be another strong year.

We screened the Merrill Lynch research data base for some chip stocks rated Buy at the firm.

Analog Devices Inc. (NASDAQ: ADI) is a stock rated Buy at Merrill Lynch and the analysts are very positive on the prospects for growth in communications driven by wireless base stations and TD deployments in China. They also see recovery in the industrial sector and growth in the automobile markets over the next year, both of which would benefit Analog Devices.

Analog Devices investors are treated to a very competitive 2.7% dividend. Merrill Lynch has a $64 price target for the stock. The Thomson/First Call consensus price target is $56.37. The stock closed Wednesday at $56.51.

Altera Corp. (NASDAQ: ALTR) delivered solid numbers so far this year, beating consensus revenue and earnings estimates. The company is among the leaders in China, and recent data show that is not changing anytime soon. 4G network deployment-related orders from Huawei have surged since earlier this year, and Huawei remains a 10% customer of Altera. The multiyear growth trend in China wireless infrastructure deployments should act as a driver for Altera in years to come, with LTE-related capital expenditures expected to increase exponentially in the next two years.

Broadcom Corp. (NASDAQ: BRCM) is a top supplier to both Samsung and Apple, and the new year could bring even more earnings growth for the chip giant. Some Wall Street analysts feel that the company, which is hosting an analyst day on December 9, will discuss in greater detail the new equity compensation program for management, which will be driven in large part by total shareholder return. This is one of the reasons to believe the upcoming analyst day will be particularly shareholder friendly.

Broadcom shareholders are paid a 1.1% dividend. The Merrill Lynch price objective is $50, and the consensus estimate is $44.52. The stock closed on Wednesday at $43.25.

Intel Corp.‘s (NASDAQ: INTC) commitment to smartphone and mobile applications, combined with the resurgence of PC growth this year, has made Intel one of the best large-cap value stocks to buy in 2014, and the same outlook can drive the stock next year. Intel trades at 15 times forward earnings, more than in recent years, but still a reasonable multiple for investors looking for growth. The Merrill Lynch team cited lower beta, a very fair dividend yield and operating leverage, as good reasons to invest in this chip giant.

Intel shareholders are paid a solid 2.4% dividend. Merrill Lynch has a $43 price target, while the consensus target is posted at $35.61. Intel closed Wednesday at $37.43.

ALSO READ: What Could Make IBM the Best Dow Stock of 2015

The Merrill Lynch report also speculated that consolidation in the industry, which has been well received on Wall Street this year, could continue. Most likely these large cap companies would be the acquirers. We will be on the lookout at 24/7 Wall St. for the companies likely to be potential targets.