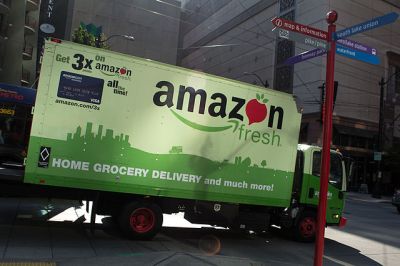 Source: Visitor7 / Wikimedia Commons
As hard as it may be to believe, the first half of what has been a very up and down stock market in 2015 is over. The question for many stock investors is what will the second half bring? Will we see a big correction? Are interest rates going higher? One thing is for sure, the Internet will remain a ubiquitous presence, and investors on the right horses could be poised for continued gains.

A new research report from Merrill Lynch highlights the firm’s top Internet stock ideas for the rest of 2015. While some may come as no surprise, others could be wild cards for investors.

This company is the absolute leader in online retail, and it is also a dominate player in cloud storage business and the top Merrill Lynch e-commerce idea. Amazon.com Inc. (NASDAQ: AMZN) serves consumers through retail websites, such as Amazon.com and Amazon.ca, which primarily include merchandise and content purchased for resale from vendors and those offered by third-party sellers. In addition, the company serves developers and enterprises through Amazon Web Services (AWS), which provides compute, storage, database, analytics, applications and deployment services that enable virtually various businesses.

Amazon recently announced that it will start announcing AWS results separately starting in the first quarter of this year. It is one of the companies that the RBC team thinks is a direct beneficiary of the current pricing scenario. In January, AWS introduced a larger C4 instance class into its Amazon Elastic Compute Cloud (EC2) offer for compute-intensive workloads, such as online gaming, simulation and analytics applications. The Merrill Lynch team cites an October customer event that could drive the AWS multiple even higher.

The analysts also point to Prime adoption continuing to be a key strategic priority for Amazon, and they expect Amazon Prime membership adds to continue to benefit from an increasing menu of Prime services, including Prime Instant Video, same day delivery, Prime Music, Prime Photos and Kindle Owners Lending Library.

The bottom line for investors: Amazon offers a diverse product category that will continue to benefit and enrich consumers’ cloud, entertainment and, of course, online shopping experiences. With the huge infrastructure built to deliver these services, challengers will be very difficult to find.

The Merrill Lynch price target for the stock is $475. The Thomson/First Call consensus price target is $469.08. Shares closed Wednesday at $434.09 apiece.