Why Goldman Sachs Added Apple to Its Conviction Buy List

If there is one bulge bracket brokerage and investment banking firm that can cause a stir with its research department, Goldman Sachs is probably the first one that comes to mind. So what happens when you see Goldman Sachs take its Buy rating on Apple Inc. (NASDAQ: AAPL) and get even stronger? Apple was added to the Goldman Sachs Conviction Buy list on Wednesday, with a $163.00 price target.

Many analysts have had mixed views on Apple in recent weeks. The iPhone 6s is the current horse drawing the carriage here, but Goldman Sachs analyst Simona Jankowski is looking for a serious reconsideration on how Apple is thought of by the investing public. For instance, Apple trades at a 30% discount to the S&P 500.

What matters about this upgrade is that Apple’s recurring revenue stream may replace the investor mindset that Apple is just a hot hardware company. That is based on a maturing iPhone user base. So what happens if Apple gets revalued as a service provider rather than just as the top technology and hardware company?

For starters, the upcoming Apple TV service was highlighted as a key driver. All in all, Goldman Sachs sees a potential for some $7.6 billion per month in revenues. That would be roughly $22.8 billion per quarter and over $91 billion a year.

But don’t just assume that Apple will get that in new revenues, as the method is not exactly set in stone. That comes from monthly average revenue per user for the iPhone, music, TV, Apple Pay, Apple Watch and more, and it is considering an expected 40% growth in iPhone sales in the next two years. That is from the iPhone 6 refresh and the coming iPhone 7, which could launch sooner than expected in 2016. If that occurs, as Goldman Sachs is hoping, then Apple’s iPhone base will be 700 million users.

Apple TV is perhaps the next big potential in the call. That $100 billion pay-TV industry is said to be ripe for disruption. Millennials are leading the trend toward cord cutting and over-the-top services with skinny bundle subscription packages, and they are entering their years of household formation.

Keep in mind that not all the analyst calls in Apple have been positive of late. The most recent call was from Merrill Lynch, where the firm’s Wamsi Mohan kept a mere Neutral rating after it was shown that Apple PC units were down 7% year over year in the last NPD data. That was just below market performance with a 3% revenue decline in October.

24/7 Wall St. would also remind readers that one key reason Apple is now trading at a discounted earnings valuation to the broader market is because of its size. After all, a $653 billion market cap is not just massive, it is the largest market cap of all companies by far.

Another observation is that Apple’s most recent short interest plunged, although Credit Suisse’s recent report suggested something of a slowdown in Apple’s supply chain. 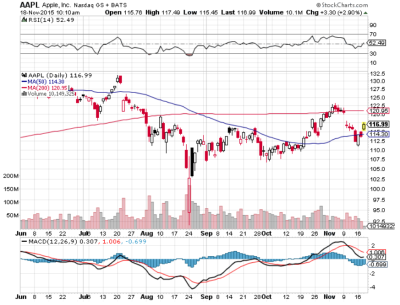