The coming 5G build-out is supposed to be the next big opportunity for exponential growth in communications. Tens of billions of dollars are going to be invested in this effort for years and years, and while there are some concerns that 5G may not live up to the hype it’s still the next best thing that the technology and communications sectors have to look forward to. Some technology and communications equipment providers are set to win untold billions of dollars in revenues after adding up all the 5G spending costs.

24/7 Wall St. recently featured how six companies will win off the coming 5G build-out, but two of these well-known companies need to get a revisit as they are industry leaders and as they have not participated at all in the wealth that has been created during great bull market. Two of the companies which stand to greatly benefit in the United States and in the entire Western Hemisphere have been absolute duds for investors over the last five years. If the long-term dismal performance cannot be made up at some point soon, it’s very possible that investors will revolt and storm the palaces demanding much more change.

A 10-year and five-year chart comparison from BigCharts against the S&P 500 (SPY) has been shown (see below) for a comparison of just how long these two industry leaders have floundered.

Nokia Corp. (NYSE: NOK) has been a disappointment to investors for years now. Being the amalgamated Alcatel, Lucent and Nokia gives this company a deep opportunity throughout the entire western hemisphere as nations look to stay away from Huawei in their infrastructure. A recent U.S.-Poland security declaration has put more pressure on Huawei/ZTE 5G equipment and added greater security scrutiny that may just be that much more of a win for Nokia. Merrill Lynch puts the 5G opportunity at $12 billion annually in calendar year 2020 for Europe alone.

Nokia’s American despositary shares (ADSs) have not performed well in 2019 despite an early 2019 rally that started to fail even ahead of the “sell in May” craze. Nokia is down almost 6% over the last month and its shares were down about 14% so far in 2019.

The same opportunities for Nokia had offered a floor for Ericsson, or Telefonaktiebolaget LM Ericsson (NASDAQ: ERIC), in Europe and the western hemisphere. That said, Ericsson’s American depositary shares have dropped handily after peaking at $10.46 in April and then riding the “sell in May” wave lower and lower since. Most of the analysts who see upside also see the sell-off as having been way too overdone to the downside. There is also talk of a CEO replacement being expedited.

The ADSs of Ericsson surged earlier in 2019, but now their performance is in the red. Ericsson is down 6% in the last month and down almost 20% in the trailing quarter, and year-to-date the shares are down about 10%.

With Europe’s 5G network presenting close to a $12 billion opportunity in 2020 alone, and with Huawei/ZTE having a much harder time getting new business in Europe, the potential wins for the two companies are significant as both are based in the European Union. Ericsson’s revenues of $24.3 billion last year and Nokia’s revenues of $26.7 billion leave a lot of room for upside for the “hometown team” to win business.

As far as other analysts, there are many calls out there.

CFRA has a Buy rating on Nokia with a $6.50 price target and a Buy rating and $11 target on Ericsson for their ADSs. The firm noted that Nokia has a higher exposure to telecom and network equipment than Ericsson (90% to 64%) and that it should benefit handily from the coming 5G upcycle.

One report from SDXcentral suggested that the total spend by U.S. operators alone would be $100 billion in total for the years 2018, 2019 and 2020 alone. While not all of that is in equipment, this build-out may not even be completed and fully functional on an “everyone, everywhere” basis by 2025 — and by then (or before), assuming history’s repetitive nature holds true, the markets will be talking about the coming 5G+ or 6G or whatever is next. 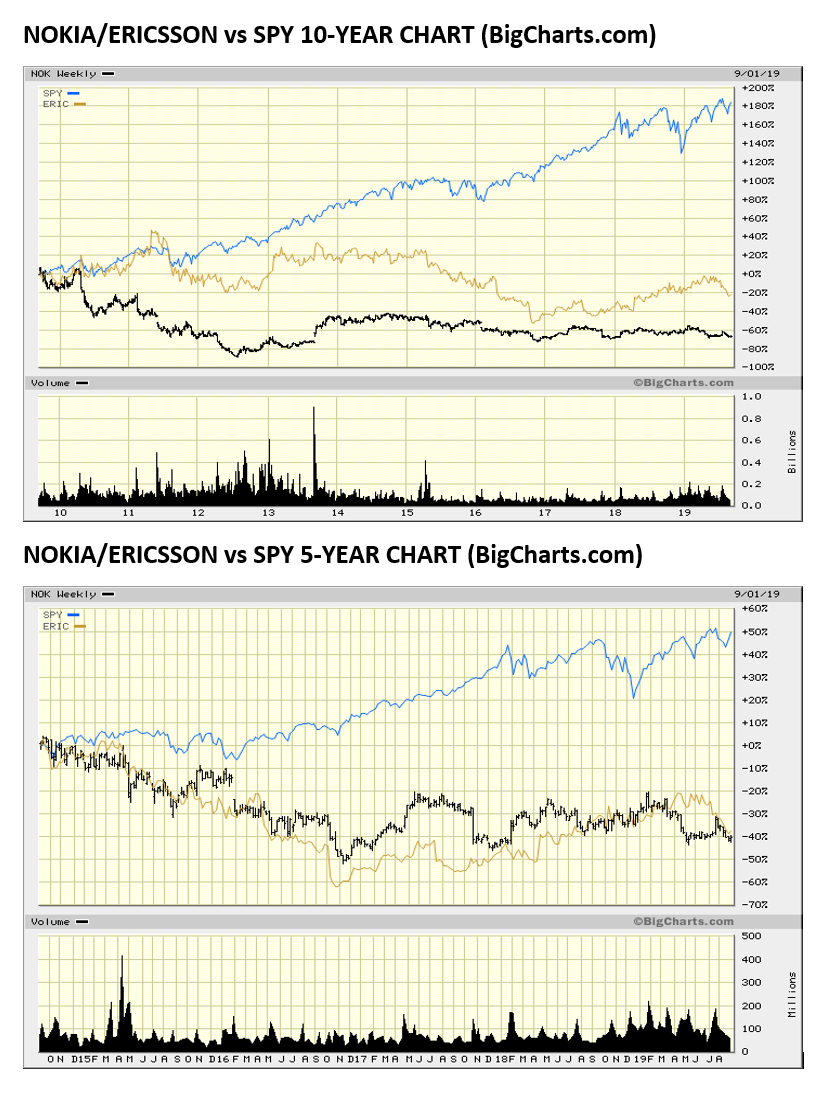