Our look Wednesday at the dispute between Apple Inc. (NASDAQ: AAPL) and Facebook Inc. (NASDAQ: FB) concluded with Apple’s claim that it is protecting a person’s privacy while Facebook claims that the privacy Apple claims it is protecting will cause small businesses to lose 60% of sales for every dollar they spend on advertising. Because the two claims are being made to different parts of the high moral ground, both could be true — or not.

In a story published Tuesday by the Harvard Business Review, two marketing professors examine Facebook’s “eye-popping” claim, by asking two questions: “[W]here does the data for this apocalyptic claim come from? And does it hold up under scrutiny?” 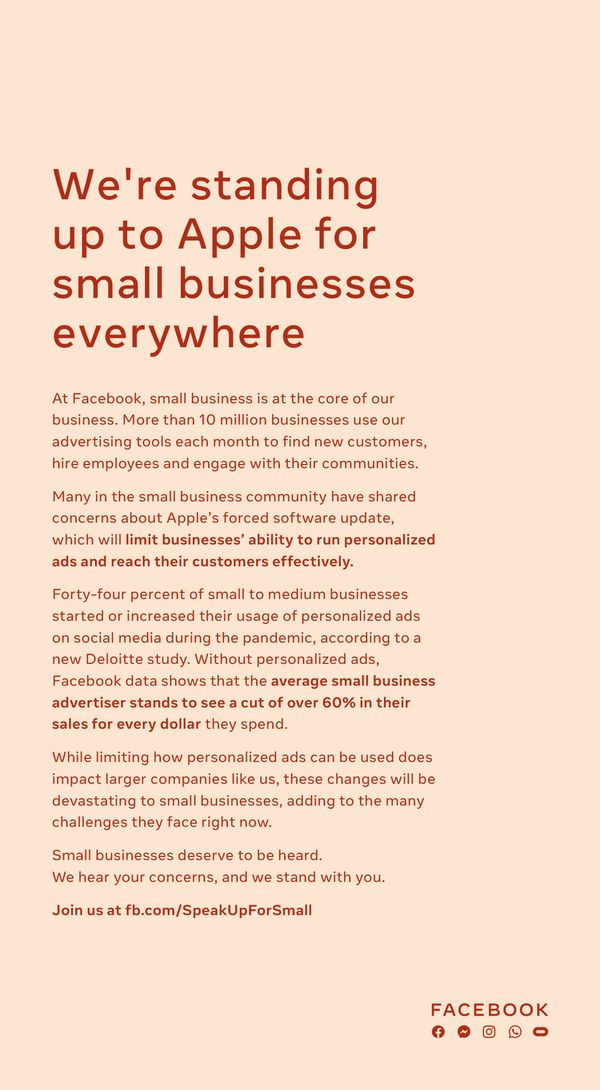 Bart de Langhe and Stefano Puntoni, authors of the HBR article, write that Facebook’s claim is based on the metric it prefers: the return on ad spend, or ROAS, that indicates “the amount of revenues associated with advertising — but … does not indicate the amount of revenues caused by advertising.” For example, if a company targets its best customers with an ad and those customers “spend a lot,” then the ROAS will be high. But that does not indicate those same customers spent more because of the advertising — they would have spent their money anyway.

According to de Langhe and Puntoni, Facebook is “claiming that when it compared the ROAS for campaigns that leveraged personalized information with campaigns that didn’t, it found that small businesses would suffer a 60% cut in revenues if they were deprived of personalized advertising.”

That “scary-sounding number … is almost certainly too high,” they go on to say. Comparing no advertising with randomized control trials revealed “much smaller differences” in a study published by two Northwestern University professors and two Facebook employees in 2018.

In Facebook’s ad, the company also claims that 44% of small and medium-sized businesses “started or increased their usage of personalized ads on social media during the pandemic, according to a new Deloitte study.” De Langhe and Puntoni “took a close look” at Deloitte’s study and concluded that “Facebook reported the number incorrectly“: “Facebook, it seems, cherry-picked the data that best supported its case — and then increased the size of the cherries it picked by a third.”

While the authors defend Facebook’s right in its battle with Apple to stick up for small businesses (and, by the way, the company’s own business model), “disinformation about advertising effectiveness isn’t the way to do that.”

Apple Stock Gets a Push From Warren Buffett