Publicly traded bitcoin miners hold about 46,000 bitcoin, more than 20% of the 800,000 bitcoin held by all miners, public and private. But maybe not for long.

Bitcoin miners have sold 30% of their stockpiles in the first four months of 2022, as the falling price for the cryptocurrency has tumbled and mining profitability has fallen by 80% since the peak of around $68,900 reached in November 2021.

Based on an electricity cost of $40 per megawatt-hour, a miner with the most advanced hardware could realize a profit of around $60,000 per bitcoin in November. That profit has now dwindled to around $13,000 per coin, according to Arcane research. Miners using older hardware are losing $3,000 on every bitcoin they mine. 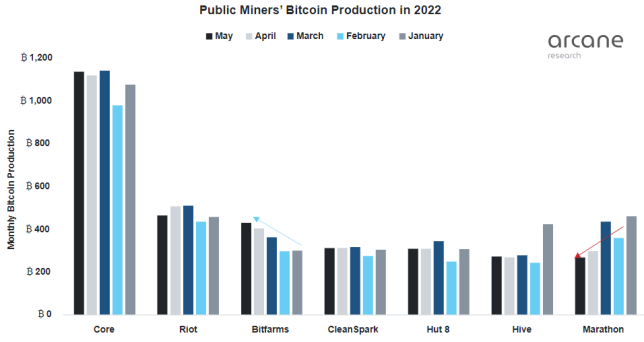 Marathon, which in December had touted itself as the only pure-play bitcoin investment, purchased 4,813 bitcoin on the open market to add to their pile. Marathon, Bitfarms and some others had until recently never sold any of the bitcoin they mined. Raising equity and debt to pay operating expenses was easy.

Since the market for tech stocks started its slide late last year, the easy money mostly has disappeared, the profit per coin has tumbled, and one miner, Bitfarms, sold almost half its bitcoin stash (3,000) last week, cutting its holdings to 3,349 bitcoin, including June production to date.

Here is a quick look at how mining stocks have done over the past year.