Verizon Says FCC Goes Back to 1930s on Net Neutrality

Net neutrality in a nutshell is the idea that an Internet service provider (ISP) will treat everyone’s data neutrally, equally. In a sense, ISPs will not choose what data, or whose data, gets sent more quickly, which sites are blocked or even if some people have to pay extra.

You might now see why Verizon was so unhappy with the results, given major potential streams of revenue that it has lost out on. In fact, the company released a scathing press release following the ruling — which was written in an old-timey typewriter and dated as 1934 (see image below) — a clear demonstration of where Verizon thinks this decision came from in today’s world.

In the press release Verizon detailed its dismay with the outcome as follows:

Today’s decision by the FCC to encumber broadband internet services with badly antiquated regulations is a radical step that presages a time of uncertainty for consumers, innovators and investors. Over the past two decades a bipartisan, light-touch policy approach unleashed unprecedented investment and enabled the broadband internet age consumers now enjoy.

The FCC today chose to change the way commercial internet has operated since its creation. Changing a platform that has been so successful should be done, if at all, only after careful policy analysis, full transparency, and by the legislature, which is constitutionally charged with determining policy. As a result it is likely that history will judge today’s actions as misguided.

It used to be that investors considered telecom stocks, with their big dividends and defensive positions, effectively the same as defensive utility stocks. That mentality is no longer present, but this news does aim to effectively regulate the Internet much in the same way as a regulated utility.

The image of Verizon’s response has been included below. 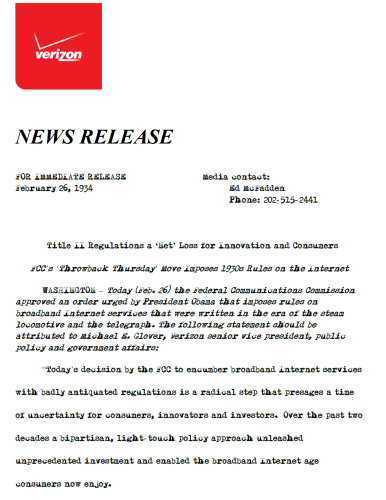