The 10 Top US Wireless Trends for the Big 4 Carriers 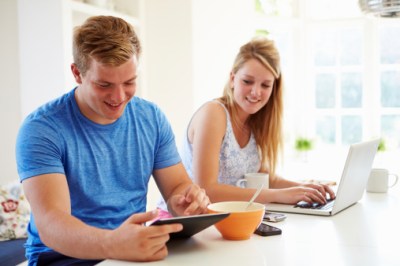 Source: ThinkStock
Wireless service and use has become so ubiquitous in the United States and globally, that everybody from children to senior citizens uses a wireless device every day. The technology leap in the past 10 years spun old leaders off the throne and created new ones with the advent of affordable, and technologically advanced, smartphones and tablets. A new report from UBS highlights the 10 top trends in the industry as of the end of 2014.

Despite the fact that wireless use and growth is tremendous, Americans rely on only four major carriers to provide service: AT&T Inc. (NYSE: T), Sprint Corp. (NYSE: S), T-Mobile US Inc. (NYSE: TMUS) and Verizon Communications Inc. (NYSE: VZ). From the data gleaned from these four carriers, the UBS team has come up with the top trends for this fast growing sector, as of the fourth quarter of 2014.

1) For the first quarter on record, industry service revenue actually declined. This was a result of equipment installation plans (EIP) and price cuts driven by competition. For 2014, industry revenues declined (EIP plus service revenue) for all the carriers except T-Mobile.

2) Record volumes and increased competition compressed service margins in the fourth quarter. According to the UBS team, the industry still recorded record margins due to EIP accounting.

ALSO READ: Yet Another Money-Losing Plan by Sprint to Acquire New Customers

3) The big four carriers generated 1.3 million handset adds in the fourth quarter and a massive 3.8 million for the year. That was five times 2013 numbers and the highest total since 2008.

4) Verizon and Sprint recaptured gross handset market share in the fourth quarter at the expense of AT&T and T-Mobile.

5) Price cuts and the adoption of EIP drove accelerating average revenue per user declines in the fourth quarter.

7) The iPhone launch was record setting, as 11% of subscribers upgraded. That is the highest percentage since UBS started tracking the data in 2007.

8) Internet device additions were a record 2.7 million in the fourth quarter. Massive holiday promotions were the likely culprit in the huge numbers.

9) Prepaid plans had another mediocre year. The industry only added a meager 620,000 prepaid subscribers in the quarter, resulting in total 2014 additions of just 750,000.

10) Last year the industry spent a whopping $31.8 billion on wireless capital expenditures (capex). That number was 13.9% of sales, which was down from a record $32.6 billion in 2013. The UBS analysts expect capex to rise a meager 2% this year.

Even in the slower years, the wireless industry is booming, and with the smartphone suppliers withdrawing many subsides for the carriers, consumers are in many cases paying the full ticket for new phones. If the economy rolls over, investors could see a swing in that trend, and it could be painful for the handset makers.