Goldman Sachs Shows Why Level 3 Is Worth Much More 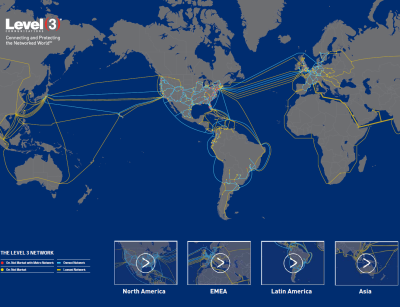 Source: Level 3
If there is one crown jewel property in communications providers and networks, it has to be Level 3 Communications Inc. (NASDAQ: LVLT). After a presentation at the Goldman Sachs 24th Annual Communacopia Conference in New York on September 18, the research team at Goldman Sachs has decided to become even more bullish on Level 3.

Goldman Sachs already had Level 3 rated as Buy, but now the firm has moved its rating up to its prized Conviction Buy list. What stands out here is that the team has a $60.00 price target, almost a third higher than it had traded up until this call (closed previously at $45.21).

There is at least one word of caution here, and that is that it was just in late May when Level 3 was started as Buy at Goldman Sachs, but with a $67.00 price target at the time.

According to Goldman Sachs, Level 3 has been one of the best fundamental turnaround stories out there in telecom and communications. That was driven by execution and by transformative mergers. Goldman Sachs still believes that Level 3 can use its balance sheet and cash flows to boost its returns and to either make acquisitions or expand its higher-return projects.

Another driving force here is that Level 3 is starting to get enough cash flow to begin buying back stock. Whether or not Level 3 will keep using assets to make acquisitions rather than buybacks remains to be seen. The firm still believes that Level 3’s cash flow is enough to repurchase around 60% of its outstanding shares over the next five years or so.

While Goldman Sachs does not really forecast that this may take place, one driving force that always has been present with Level 3 is that the company could find itself a very desirable takeover target. The bad news with that is that the company may be valued too high to ever be acquired, unless its stock sells off handily.

What makes Level 3 so attractive is that its extensive group of fiber networks connects three continents with undersea facilities that encompass over 500 markets in over 60 countries.

In coverage elsewhere in recent weeks, Level 3 was recently raised to Buy from Neutral with a $57.00 price target at UBS. That call was made on the last day of September.