The sample size is based on those airlines that report emissions data and represents less than 10% of the world’s more than 200 carriers.

The International Civil Aviation Organization (ICAO) has set a goal of reducing aviation’s net carbon dioxide emissions to 50% of 2005 levels by 2050. The ICAO also agreed to a binding agreement for a 4% reduction in CO2 emission compared to 2015 levels on all new commercial jets delivered after 2028.

The five most polluting airlines are American, Delta, United, Lufthansa and Air France in a virtual tie for fourth, and Emirates, the airline that has the biggest gain in the two-years through the end of 2014.

Fredrik Dahlman of the U.K.’s Warwick Business School conducted the study and noted that the world’s airlines contribute about 2% of global human-induced CO2 emissions. That will grow to 3% by 2050 if no action is taken.

Other factors to consider in the rankings, which are shown in the following chart, are that large airlines with lots of flights are going to emit more CO2. The impact of new, more fuel-efficient planes has been offset by the increased number of flights. 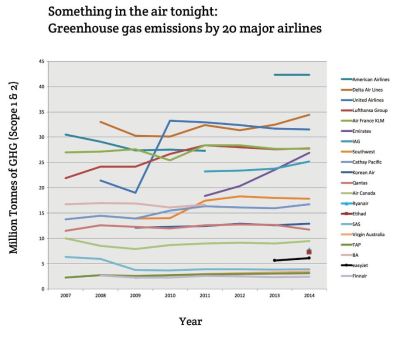 To these points Dahlman said:

The data demonstrates that for most airlines emissions are either growing or stagnant, none are showing a significant reduction in CO2 emissions.

This is despite many airlines introducing modern and more efficient planes to their fleet. The increasing number of flights, which is set to double by 2030, means cutting emissions is a real problem.

Unfortunately the data does not provide a full and completely fair picture as not all companies disclose their emissions data and given the significant variations in business models, flight destinations and aircraft used.

Perhaps the most disheartening takeaway from this study is that in the seven-year period studied, no airline that provided data showed a significant reduction in GHG emissions.