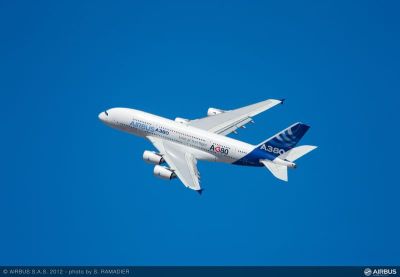 Source: courtesy Airbus S.A.
By 2032, the current worldwide airplane fleet of 17,740 planes will nearly double to 36,560 aircraft. The dollar value of the new planes will exceed $4 trillion. The forecast comes from Airbus maker European Aeronautic Defense & Space Co. (EADS) in its latest Global Market Forecast covering the period from 2013 to 2032.

A 20-year timeline in aircraft manufacturing is not really a very long time, considering how long it takes to get a new plane from the conceptual stage to a delivered product. The 787 Dreamliner from Boeing Co. (NYSE: BA) took more than eight years to get from concept to first delivery in 2011.

In last year’s forecast, Airbus forecast the global fleet would increase from a then-current count of 15,550 to 32,500 by 2031. That indicates that the number of new planes that will go into service annually also would nearly double.

Demand will grow the fastest in the Asia-Pacific region, where Airbus projects 36% of all new aircraft deliveries will take place. European demand for new airplanes is expected to grow by 20% and North American demand by 19%.

In the United States, some 85% of the demand for new planes will be for single-aisle planes like the Boeing 737 and Airbus A320 that serve the domestic market. U.S. carriers like Delta Air Lines Co. (NYSE: DAL), Southwest Airlines Co. (NYSE: LUV) and United Continental Holdings Inc. (NYSE: UAL) are expected to take delivery of more than 5,500 new planes by 2032. Some 59% of those will replace existing aircraft, and 41% will meet growing demand for air travel.

Airbus believes the economic growth in emerging nations will surpass growth in developed countries, and that 62% of the world’s population will be included in the middle-class by 2032, up from 32% today. Increasing urbanization also will help drive passenger traffic.