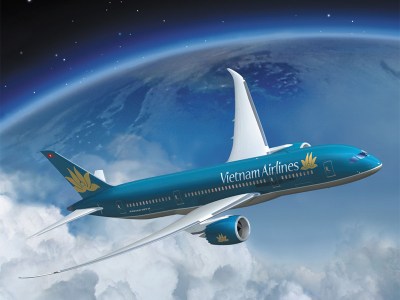 Source: The Boeing Co.
The biennial Paris Air Show officially begins on Monday, June 15, but the two big commercial jet builders have already begun ratcheting up the public relations portion of the show. Given the boom in orders over the past several years, and the relatively low number of new orders so far this year, both Boeing Co. (NYSE: BA) and Airbus may have to focus on something besides large new orders for commercial planes.

Earlier this week, Airbus announced that it had received a firm order for 10 A321 and two A320 single-aisle planes from U.S. ultra-low-cost carrier Frontier Airlines. Neither part of the order includes the new engine option that Airbus is pushing. That is likely due to Frontier’s desire to remain an ultra-low-cost carrier and partly to fuel costs that are expected to remain low for several more years.

Airbus also announced that an A350 XWB dual-aisle wide-body destined for delivery to Vietnam Airlines took its first flight on Monday. The airline is leasing the plane from AerCap Holdings N.V. (NYSE: AER) and will be the first Asian carrier to fly the A350. Vietnam Airlines has ordered a total of 14 Airbus A350s, the company’s direct competitor to Boeing’s 787 Dreamliner.

On Thursday morning, Boeing announced that a 787-9 that is being delivered to Vietnam Airlines will participate in a flying demonstration at the Paris show. The airline has ordered eight of the Boeing planes, and the plane that will fly in Paris is the first 787 to be delivered to the southeast Asian company.

ALSO READ: With Defense Budgets Ready to Grow, 3 Stocks Could Be Winners

Boeing also will have static displays of a 777-300ER from China Airlines, a 787-8 Dreamliner, a P-8A anti-submarine and anti-surface warfare aircraft, a Chinook CH-47F helicopter and an F-15E Strike Eagle jet fighter. The emphasis on military aircraft is likely no coincidence because Boeing does want to beef up the defense business that contributed about 30% of 2014 revenues.

On Tuesday, Boeing announced that it had begun building its first 737 MAX at its Renton, Wash., plant. The company may well have an order in its back pocket for the new version of its 737 family and is holding it to make a splash of some size in Paris.

Boeing also got some help Wednesday from United Continental Holdings Inc. (NYSE: UAL), which has decided against acquiring an Airbus A380, the double-decked, four-engine behemoth that Airbus essentially has one customer for. United said that flying a route multiple times on smaller airplanes gives business customers more choice than flying a single larger plane just once. That added convenience costs money though, and United may revisit this decision if fuel prices rise again.

Boeing also just posted its orders and deliveries for May. The company delivered 60 planes in the month, including 37 737s, a single 747, one 767, eight 777s and 13 Dreamliners. Last year Boeing delivered 54 planes in May.

More pre-show PR is sure to come ahead of the official opening day in Paris. Who knows, the hype from both Airbus and Boeing may turn out to be more interesting than the show itself.