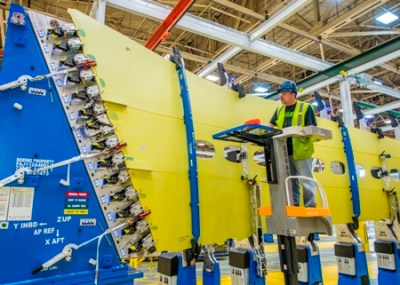 According to Boeing, Tuesday’s start on the first plane is right on schedule. The company said in March that it had begun operating an automated system to build wing panels for 737 jets at its plant in Renton, Wash., where Boeing currently builds 42 737s a month. The 737 MAX will have its own production line and will not interfere with the 737 build schedule.

Boeing has already announced an increase in 737 production to 47 a month in 2017 and is considering raising that to 52 a month in 2018 and perhaps as high as 60 eventually. Rival Airbus plans to increase production of its competing A320 family of planes from a current total of 42 a month to 50 by early 2017. Airbus also believes it can boost production to 60 planes a month if demand were there.

The 737 MAX is a re-engined version of Boeing’s 737 Next Generation family and is the company’s answer to the A320neo (new engine option) from Airbus.

ALSO READ: Is Boeing Holding Back Order Announcements Ahead of Paris Air Show?

The first 787 MAX wing is expected to be completed this summer and will be sent to the neighboring final assembly plant in Renton in September. The first finished plane is expected to begin flight tests early in 2016.