Will Boeing Be First With Hypersonic Plane?

In November 1961, an X-15 experimental jet was the first aircraft to make a hypersonic flight. On Tuesday, Boeing Co. (NYSE: BA) revealed its latest concept for a hypersonic jet that may be ready to carry passengers in another 20 to 30 years.

Boeing is building upon a foundation of six decades of work designing, developing and flying experimental hypersonic vehicles, which makes us the right company to lead the effort in bringing this technology to market in the future.

According to Boeing, a hypersonic plane could have either or both military and commercial uses. In January, Boeing unveiled a hypersonic military plane (concept drawing below) that would replace the Lockheed Martin Corp. (NYSE: LMT) SR-71 Blackbird as an intelligence, surveillance and reconnaissance plane. Lockheed also has a hypersonic concept it calls the SR-72. 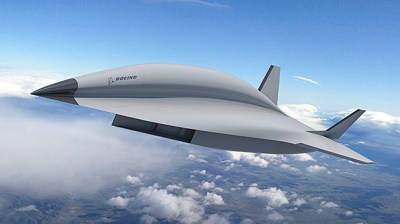 Russian President Vladimir Putin has said that his country will have a hypersonic missile available in 2020. The submarine-launch-capable Zircon hypersonic cruise missile is reported to have a range of 270 miles at a speed of Mach 6.