Why Boeing's 20-Year Outlook Is Not Lifting Investors' Spirits

Over the 20-year period between 2019 and 2039, Boeing Co. (NYSE: BA) expects commercial aircraft makers to deliver 43,110 new airplanes to customers. Three-quarters of those planes will be single-aisle jets like the 737 Max and the Airbus A320 family.

The data comes from the 2020 edition of Boeing’s annual Commercial Market Outlook (CMO) released late Wednesday. The estimate for global deliveries has declined by just over 2% from a total of 44,040 in Boeing’s 2019 edition.

Boeing has not delivered a single 737 Max since April of last year, following two crashes of the plane that killed 346 people. Earlier this week, the company reported that it did not write a single new order in October and delivered just 13 new commercial jets in the month. There also have been reports that the U.S. Federal Aviation Administration is expected to lift the grounding order on the 737 Max as soon as next week.

The year-over-year decline in global deliveries is related to the COVID-19 pandemic that has decimated the airline industry this year and appears headed to be an anchor on a recovery in 2021. Boeing commented in its introduction to the 2020 CMO: “As we see it today, the near-term impacts [of the pandemic] have become visible but key long-term growth drivers remain as well. Our forecast … reflects a combination of the unprecedented near-term industry disruption and the long-term resilience we have seen for decades.”

Boeing estimates that it likely will take three years for air travel to return to 2019 levels and “a few years beyond that to return to long-term growth.” 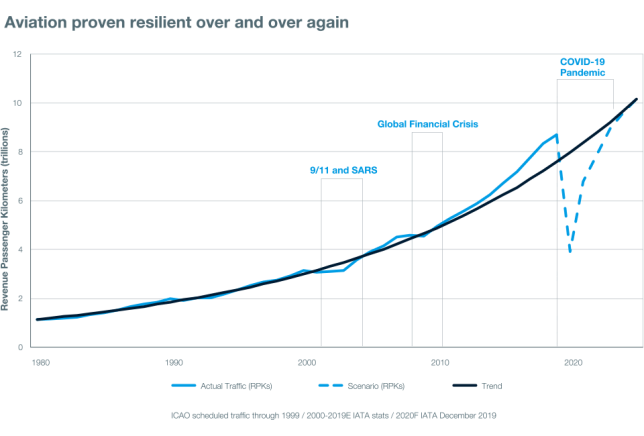 Boeing also noted that passenger air travel has increased at an average rate of 6.5% per year over the past 10 years, compared to long-term average growth of 5% annually. Airline customers added new airplanes to keep pace with the growth and “often delayed airplane retirements to accommodate passenger demand.” Boeing believes that the current airline industry downturn “is likely to lead to the replacement of many older passenger airplanes.”

Traffic growth, however, is expected to average just 4.0% over the 20 years to 2039, down from last year’s projection of 4.6% growth. Domestic travel in North America is forecast to grow by just 2.6% annually in the period, and domestic European traffic is forecast to rise by an annual average of 3.3%.

The CMO projects domestic travel in China to rise by 5.7%, slightly higher than the 5.5% growth estimate in last year’s outlook. Travel between China and the Middle East is forecast to rise by an annual average of 7.5% over the 20-year period, second only to 7.9% growth in traffic between Southeast Asia and South Asia. In the 2019 CMO, domestic Chinese travel was projected to rise by 6.2% and travel between China and the Middle East was projected to increase by 9.4%.

Boeing expects increased China’s domestic and international traffic growth to lift deliveries of passenger jets in the Asia-Pacific region from last year’s estimate of 17,390 to a new estimate of 17,485. Of the new total, nearly half (8,600) are expected to be delivered to Chinese airlines and 6,750 are tagged for delivery to Southeast and South Asian customers. The Chinese total is more than 6% higher than the 8,090 new planes in last year’s CMO estimate.

Getting the 737 Max back in the air remains critical to Boeing. Estimated deliveries of dual-aisle, widebody jets have fallen from 8,340 in last year’s CMO to 7,480. These are primarily Boeing’s 777 and 787 passenger jets and the Airbus A350 family.

And Boeing has little choice but to focus on the Asia-Pacific region. The problem is that China’s own airplane manufacturer, Comac, is flight-testing a single-aisle competitor to the 737 and A320 families. Through September, the Comac C919 had received 815 orders from 28 airlines, most based in China, according to a report from CNN.

Where Boeing comes up empty is in the regional jet category. Since Airbus acquired Bombardier’s regional jet (now the Airbus A220), Boeing’s proposed tie-up with Brazil’s Embraer has fallen through and Boeing has no plane on the drawing board to compete with the A220. The 2020 CMO estimates 20-year demand for regional jets at 2,430 airplanes, up by nearly 200 from the 2019 estimate of 2,240.