Something is happening at Google Inc. (NASDAQ: GOOG).  Something bad.  That is what its  chart is saying.  Google’s stock has today broke down under the $500.00 mark for the first time since September 20, 2010.  A report from CNBC was out earlier that Oracle Corporation (NASDAQ: ORCL) was suing Google over Java, which it took over when it acquired Sun Microsystems.  The reasons for the weakness may be many or it might be one trend.

Google has failed to deliver on some acquisitions.  The move to mobile has so far not yielded the significant returns for the company that many have hoped, although we will be the first to admit that the endgame in mobile ads might be years away.  And all the hoopla around Android?  Google effectively has made that available for free.  Google is now also without what Wall Street referred to as “adult supervision.”

We still believe that there is a perception problem with the company.  Are you investing in the world’s leading search engine?  Or are you investing a search company that has a string of clumped-together units, along with a ventures unit that invests in renewable energies and other proactive “good for life efforts?”

The latest comScore data showed a slight uptick in U.S. search share.  Yahoo! Inc. (NASDAQ: YHOO) has the powerful Yahoo! Japan (or part of it).  The fight with China might not matter so much in today’s dollars because the ad market is still developing there where so many of the hundreds of millions of internet users are not attractive to advertisers since they are poor.  That leaves Baidu, Inc. (NASDAQ: BIDU) with a lock in the Chinese markey.  And now we have Yandex N. V. (NASDAQ: YNDX) public, although what was touted in its hot IPO as “The Google of Russia” also just hit a post-IPO low.  Maybe being the search leader in Russia isn’t so great after all.

Our take was that Google should not be using so much of the company’s cash for philanthropic efforts, but when we conducted a survey on that we were shocked to find that the results were fairly split on that front.

Maybe it is just that Google is now changing the look of its home page more often than many people change their underwear.  And maybe it is just in sympathy with Apple as its chart just had a technical violation today.

It is very possible that the current slowdown in the economic data is starting to translate to lower ad rates in some segments.  We have not yet seen that happen in any meaningful amount in any sector yet, but there is always that mystery about how Google charges ad rates versus how much its out to AdSense clients.  We have seen that analysts have lowered their earnings estimates in recent weeks for the quarters ahead, but the lowering of estimates has not been massive.

The good news is that Google is actually back above the $500.00 mark here shortly before the closing bell.  The bad news is that shares are still down 0.4% at $500.92 and it is down on a day when the broad market is up.  The NASDAQ market is down by roughly the same amount.

Google has traded in a range of $433.63 to $642.96 in the last 52-weeks.  There is no immediate risk that Google is looking at its 52-week lows.  Still, all caveats considered, Google’s stock is one that looks like itwants to go lower.  A close under $500 would be worse than the $496.67 low today on a psychological basis but there is nothing magical about that $500 mark as far as the chart analysis goes.  The last pivot level was closer to $490 and then around $470 after that.

We have tried to cover what some of the forces are now.  Maybe it is just the market and maybe it is  something else.  Whatever it is, it is a technical event playing out as the chart from Stockcharts.com shows: 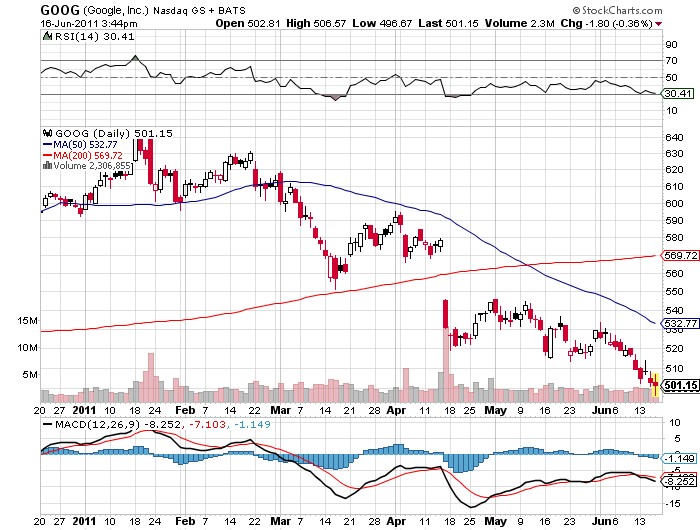