The most downloaded app in the United States last year was TikTok, when measured against combined downloads across iOS + Google Play. The video-sharing social network is one of the China-based technologies the Trump Administration wants to ban, but so far courts have blocked the attempt.

TikTok’s success in the U.S. has been particularly impressive because its origins are outside the U.S. Other large social networks which include Twitter, Facebook, Instagram, and Snapchat were created in American, and are owned by American companies. TikTok’s user base in the U.S. may be close to Twitter’s.

TikTok was downloaded 89 million times last year in the U.S. according to research firm Apptopia. That puts it ahead of video conferencing app Zoom. The use of Zoom has pushed shares of its parent, Zoom Video Communications, Inc. up by 381% in the last year. It has a market cap of $100 billion.

Apptopia researchers commented “Sadly, there are no real surprises here. Four of the apps on both charts are Facebook owned. Newcomers include Zoom and Google Meet, enabling us to have remote meetings. For the US, Cash App is the only finance focused app to land in the top 10.”

The Disney+ number shows its ascendance as one of the top streaming services. The Walt Disney Company claims that, at the end of the year, it had 73.7 million subscribers. And, the company said, that figure was rising quickly. It still remains behind market leaders Amazon Prime and Netflix. However, the number shows how much it has challenged its older rivals. Disney+ is less than 2 years old. It is also a sign that people have an interest in streaming on smartphones.

Among the conclusions the Apptopia data beg is how much the COVID-19 pandemic has affected app download patterns. A look at the list shows that the answer is a great deal. 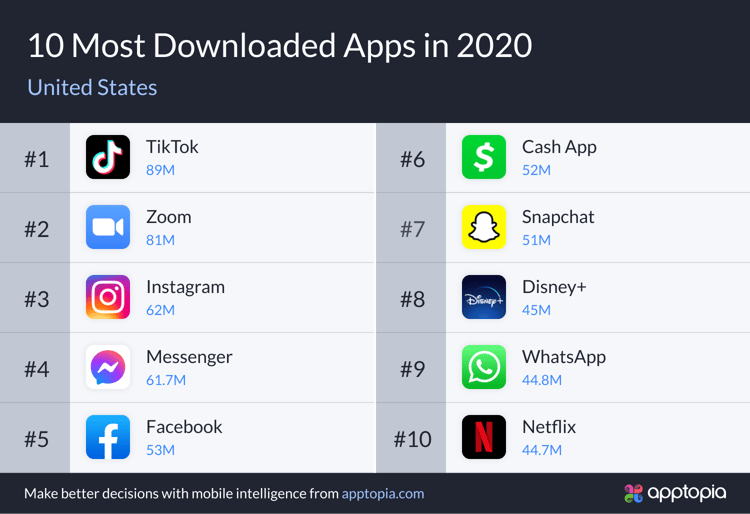