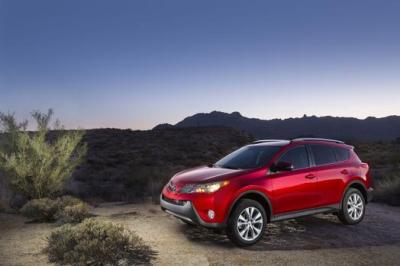 The RAV4 has several advantages in terms of its attraction to consumers. The first is that it is an inexpensive, high-mileage, small SUV in a market that prizes all three characteristics. The RAV4 has a base price of $23,550. It gets 24 MPG in city driving and 31 on the highway. And crossover SUV sales are up 11.2% overall in the first eight months of the year, which is an indication of demand for vehicles in the category.

Toyota offers an extremely large range of versions of the RAV4, the kind of breadth that helps sales. These versions range from the base model to an upper end Limited Edition, which can sell for as much as $35,000. The most expensive version offers high-end audio and a number of adjustable features and larger wheels.

It could be argued that the RAV4 has stiff competition, particularly from the Ford Motor Co. (NYSE: F) Escape. Sales of the Escape show how broad the small SUV market is. The car was also among the top 20 — selling 8.5% more in August to 28,996. Demand across the category is enough to support more than one best-seller.

The RAV4’s single largest advantage may be that it is a Toyota. The quality umbrella the largest Japanese car company has built over all its vehicles has been decades in the making, despite recall problems four years ago. In the most recent Interbrand global brand valuation study, Toyota has the 10th most valuable brand in the world at $35 billion, up 17%, and well ahead of all other car companies. Toyota also ranked fifth in the new J.D. Power 2014 Initial Quality Study, behind Hyundai and luxury brands Porsche, Lexus (a Toyota division) and Jaguar.

The RAV4 is likely to be among the best-selling vehicles in America for the balance of the year. It has too many cards stacked in its direction for it to be otherwise.