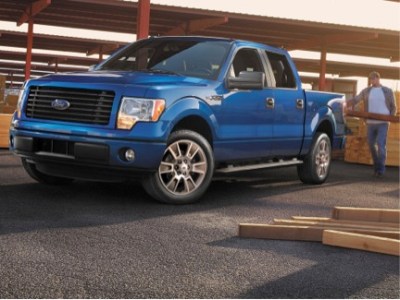 Source: Ford Motor Co.
While car and light truck sales are expected to barely inch up this month compared to March a year ago, those of Ford Motor Co. (NYSE: F), Hyundai-Kia, Nissan and Volkswagen will drop, according to a forecast by Kelley Blue Book (KBB).

The industry forecast anticipates a 0.3% improvement, year over year, to 1,530,000, which would make it the best March since 2007, just months before the country started to move into recession. Commenting on the trend in general, Alec Gutierrez, senior analyst for KBB said:

Similar to last year, winter weather had a negative impact on new-car sales in February. Consumers then returned to the market in a big way last March, and we expect a similar, though less pronounced, bump in sales this March, too. Auto sales are currently being led by pickup trucks and sport utility vehicles, which is good news for the automakers focused on these segments, as these are typically their most profitable units.

The prediction could be particularly bad for Ford, which relies on its flagship F-Series pickup, the best-selling vehicle in the country, for a fifth of its sales. Ford has launched a new aluminum-body version of the pickup, but management has observed that production has not kept up with demand. KBB expects Ford sales to fall 3.9% to 234,000.

VW continues to struggle to gain even the most modest market share in the United States. Its very limited model line hampers it. Virtually every car its sells has one or more direct competitors from much larger manufacturers. KBB forecasts VW sales will drop 3.3% to 234,000.

At the other end of the curse, Toyota Motor Corp. (NYSE: TM) will come close to catching Ford as the number two manufacturer in the United States. Its sales are expected to rise 3.6% to 223,000. Sales of market leader General Motors Co. (NYSE: GM) are expected to be flat at 256,000, as its holds it 16.7% of the American market.

Finally, the white-hot sales of Fiat Chrysler Automobiles N.V. (NASDAQ: FCAU) will cool to an improvement of only 1.1% to 196,000.

ALSO READ: Should Investors Sell GM Into Its Buybacks?