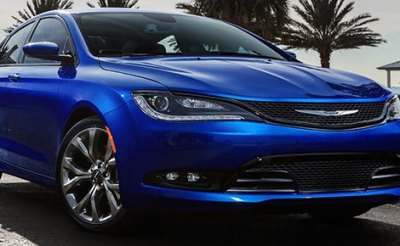 Source: courtesy of Chrysler
The Chrysler 200 is the brand’s best-selling model. However, Chrysler is offering an extraordinary 84-month financing on some versions of the car. This juxtaposition does not make sense, unless the company needs to move unsold inventory.

In May, sales of the 200 rose 537% to 20,007, according to data released by parent Fiat Chrysler Automobiles N.V. (NYSE: FCAU). For the first five months of this year, sales rose 133% to 88,009. The press release in which management announced last month’s results said:

Chrysler brand sales were up 32 percent, the brand’s best May sales since 2008 and its 11th consecutive month of year-over-year sales gains. Sales of the Chrysler 200 increased 537 percent in May, the mid-size sedan’s best monthly sales ever and the largest year-over-year percentage gain of any FCA US vehicle in the month. It was the ninth-consecutive month that the 200 logged record sales, topping its previous all-time monthly record in March of this year.

The Chrysler website shows that several versions of the 200 can be purchased with 84% financing with 1.9% APR. These include versions more expensive than the base model, among them the 200 Limited, 200S and 200C. These models come with cash allowances. The larger the allowance, the shorter the finance period allowed. For example:

The offer does come with a disclosure:

This rate is for estimation purposes only. You may not be able to finance your vehicle at this rate. See dealer for details

ALSO READ: 10 Cars Americans Do Not Want to Buy

A car with tremendous sales should not need to carry such a rich incentive to buy it. Perhaps the versions of the car that have these aggressive discounts do not sell as well as less expensive models and spend more time on lot than Chrysler and its dealers would like.

As far as the public is concerned, the reason for the deals is not important. They can buy some versions of the 200 that come with particularly impressive deals.